The FJS 737-200 Twinjet was recently on sale on the x-plane.org store. Being the big sucker for classic jets, and in particular the cigar-tube equiped -200 series of the memorable 737 line; I obviously had to get it.

I messed around a bit after installing, seeing if I could start it up from the wonderfully unsung cold and dark state(except by @BeachAV8R

). After succeeding I opted to call it a night and head off to dreamland. Awoken by the gentle autumn sun and inspired by my Mudspike coffee mug, filled with the inevitable black beverage of life I opted for a flight.

Where would I go? To my favourite place! The Caribbean! TIST or TISX were the obvious starting points, with either TNCM just off to the east, or TJSJ off to west being the obvious choices. Neither would throw me on the high altitude airways and both would give me a little breathing room to figure out my approach once airborne.

It should be of note that the 737-200 doesn’t have any INS or GPS installed by default. You can buy the INS for 10$ that bolts onto the 737-200 and the 727 Study V2 product of FJS. this INS system is called the CIVA Navigation System, which about sums up my knowledge about it. It looks pretty vital if you desire to leave the world of VOR Beacon populated country and short hops!

I have plotted a short flightplan in SkyVector that has me making a left turn after departure, intercept and pass over the STT beacon, then turn towards San Juan. It works but is not ideal, the mountains south of the airport are not high, but high enough to form a point of attention if I would loose my bearings and fly the wrong direction. I plan on landing on runway 10 given the predominantly eastern winds.

As it turns out, Westjet has a old 737-200 parked on TIST that they really wanted to sell! Unfortunately it was scheduled for a charter to San Juan today… Well, atleast BudgetPaints is located there, so it’s where I need to go! So after a little haggling I agree on taking the passengers and cargo with me, with the condition that I can do “Eye of the Tiger” karaoke on the PA system. They did not look amused… Can you imagine?! 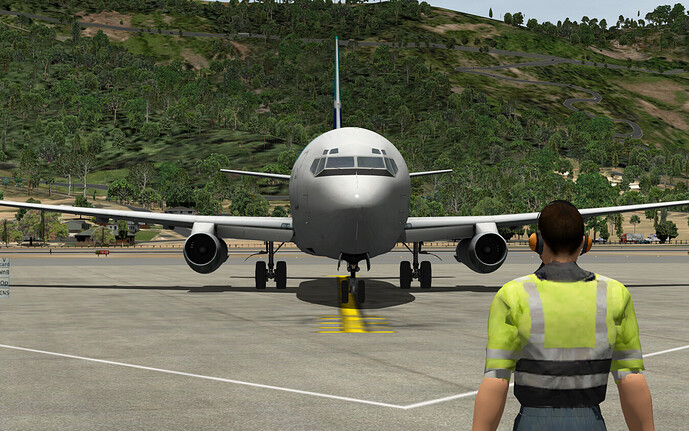 The passengers started boarding already and are complaining that the AC is too hot, jokes on them though. It wasn’t on yet.
A few flicks and flops on a variety of switches later and the lights, galley, air-conditioning and no-smoking signs are on! That should hopefully get them drunk enough before we start taxiing 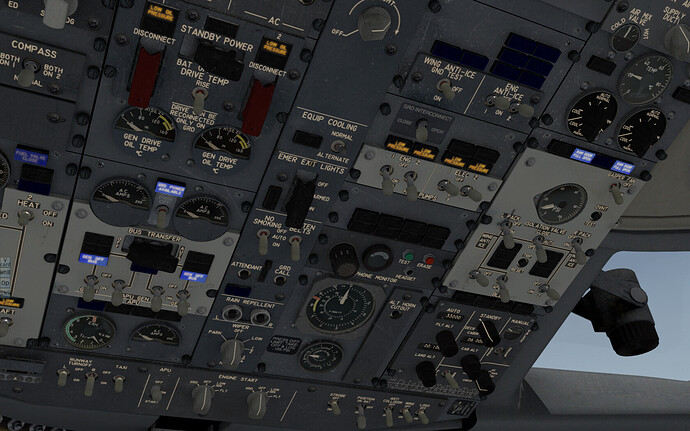 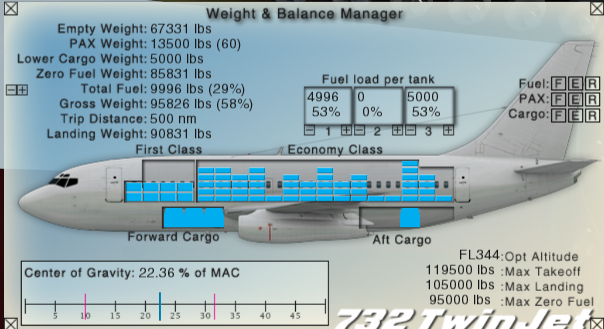 We have enough fuel to reach our destination and do a few laps around the island if we’d feel inclined enough. Depends a bit on how the passengers behave in the back, they already started a congo-line. Perhaps bringing all that vodka was not such a good idea. 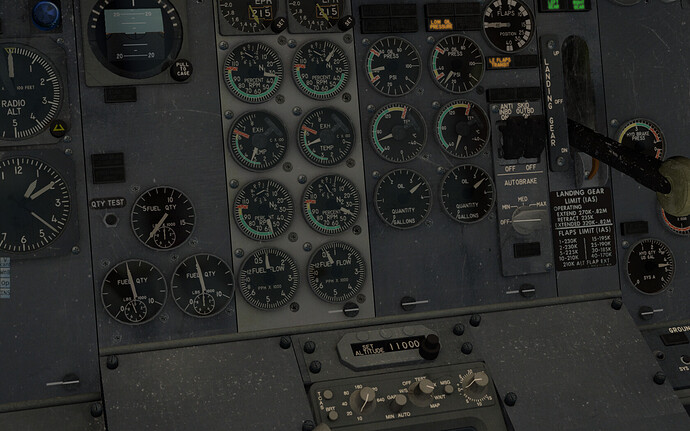 Engine 1 and 2 are spinning to life and overruling any authority the poor little APU had, the center fuel tanks are empty so I would indeed expect those lights to remain lit. Everything else seems to be all fine and dandy! 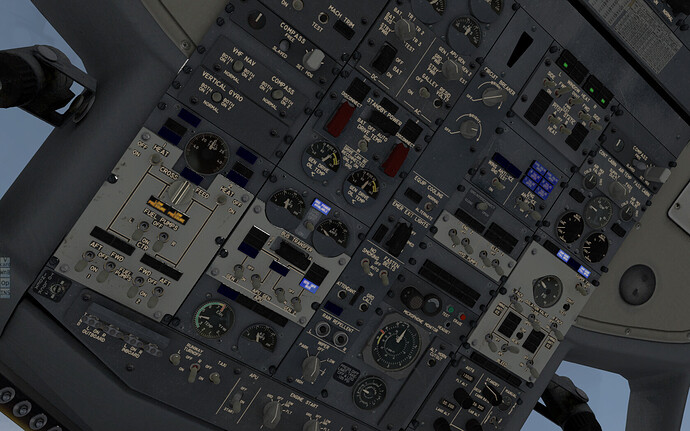 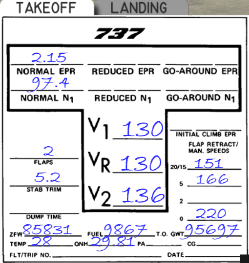 Very nice vref card, I can really appreciate this attention to detail. 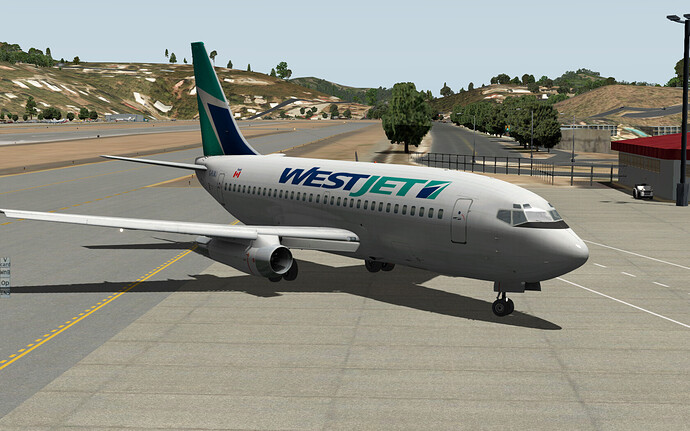 Almost pushed back, the 732 does not show a pushback tug although that’s only really immersion breaking if you are viewing it from the outside. 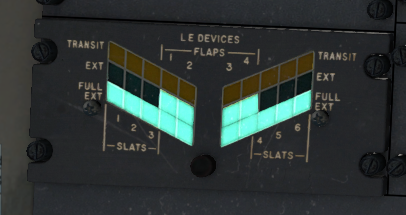 Verifying the flaps are set and dandy, ready to flap in the wind and do whatever it is that flaps do(something something change profile?). 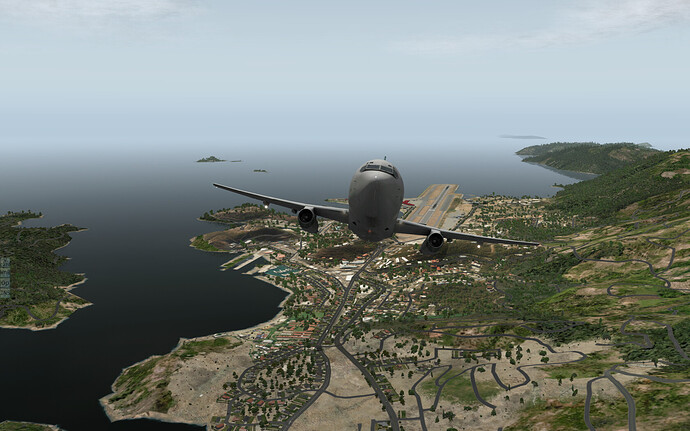 After a quick and sobering taxi(I had to stop the conga-line shenanigans) we head off for a quick and steady departure, gently banking left to intercept STT. At this point I made a big misstake.

The 737 Autopilot is a rather simplistic affair, I made the misstake of presuming it would be simple and straight forward, this caused some very violent manoeuvres and altitude changed that were not quite… commanded. After a big loop around the island I finally coerce the auto-pilot into doing my bidding by threatening it with a serious application of percussive maintenance, which never fails. 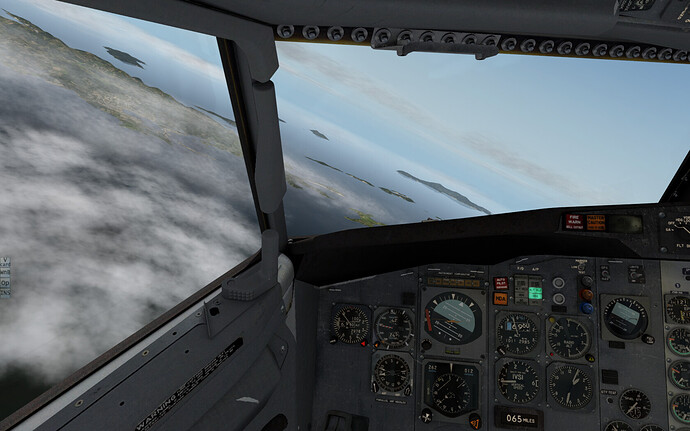 The instruments are absolutely gorgeous, and very smooth and clear! 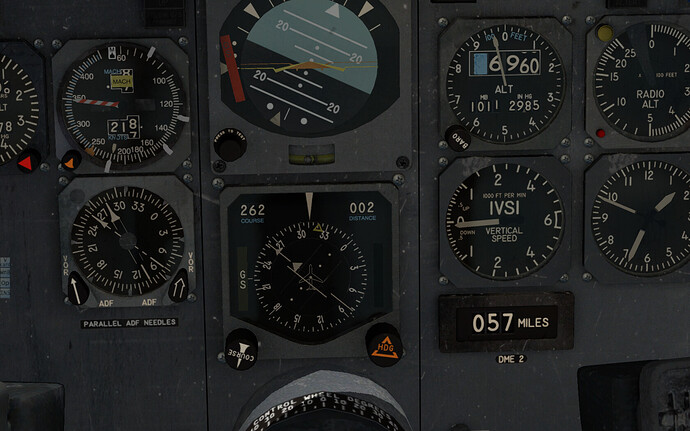 The WestJet livery is nothing special, but I am a sucker for those black patches on the nose! 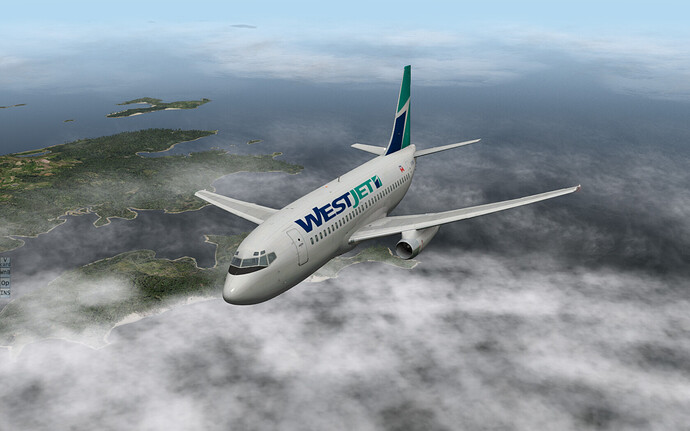 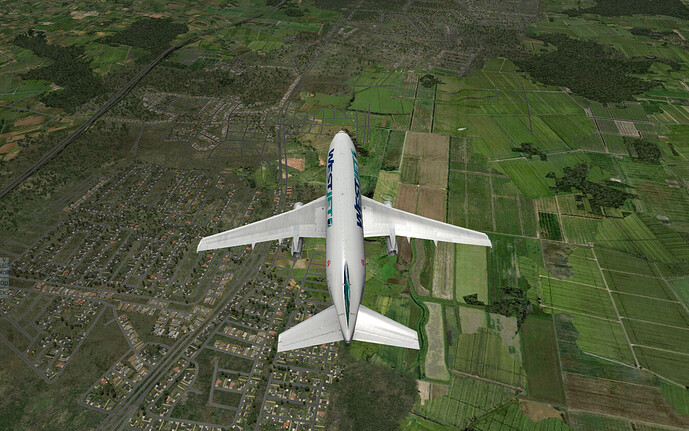 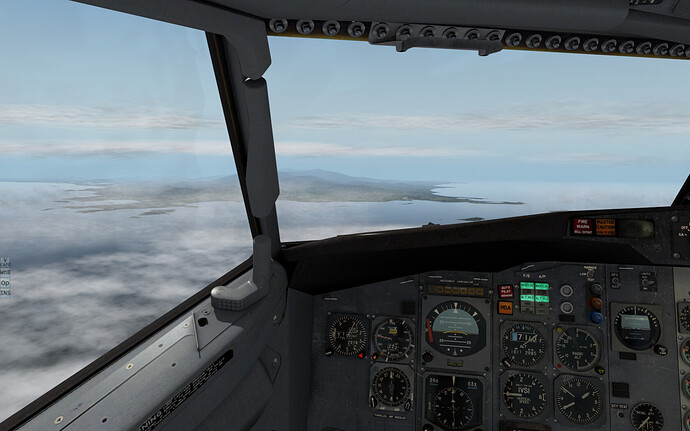 I underestimated the distance on the map to intercept the ILS, so I flew it in a little high. No biggie, there’s an ocean and a big ol’ left turn up ahead! 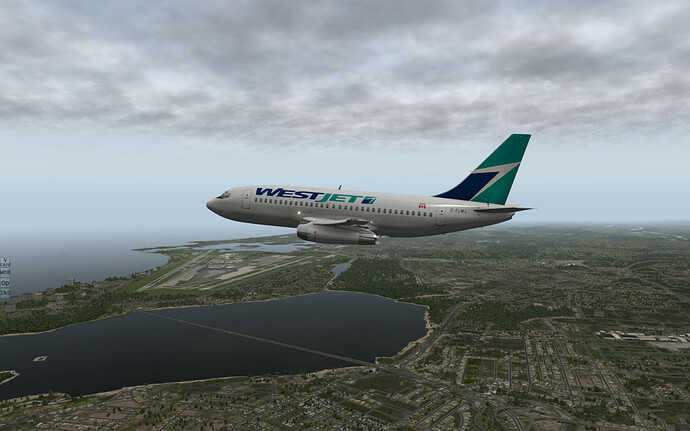 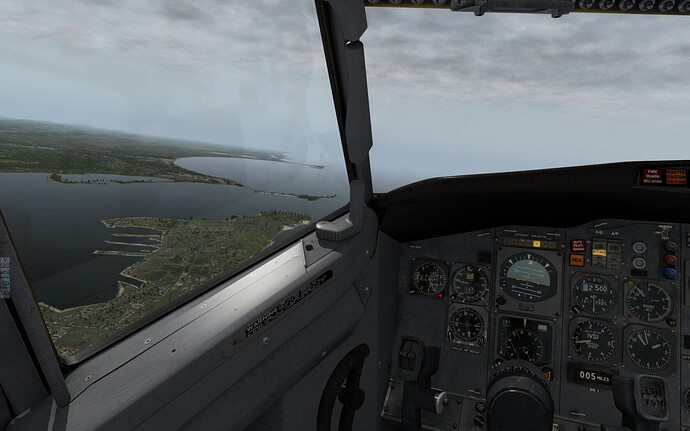 Manually flying the ILS, because it’s some of the best fun you can have with these old aircraft. 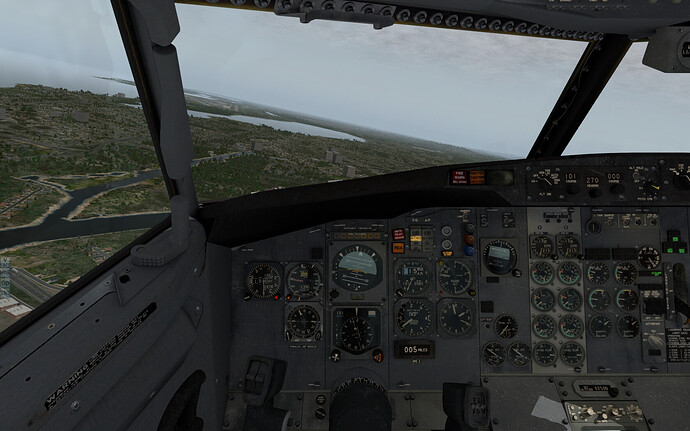 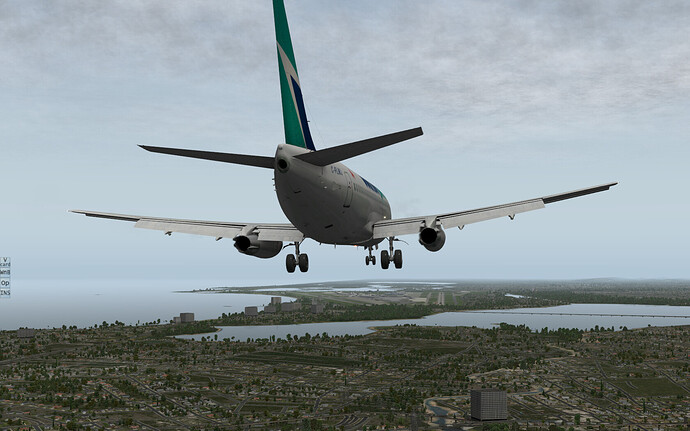 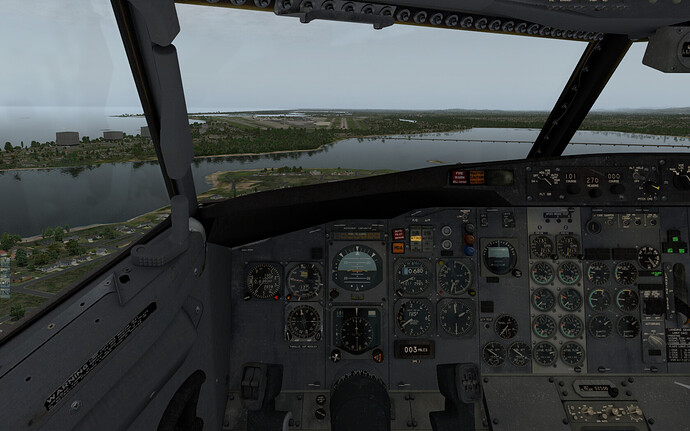 Crossing the highway, a little high since those tree’s would get trimmed a little if I’d stuck to the flightpath! 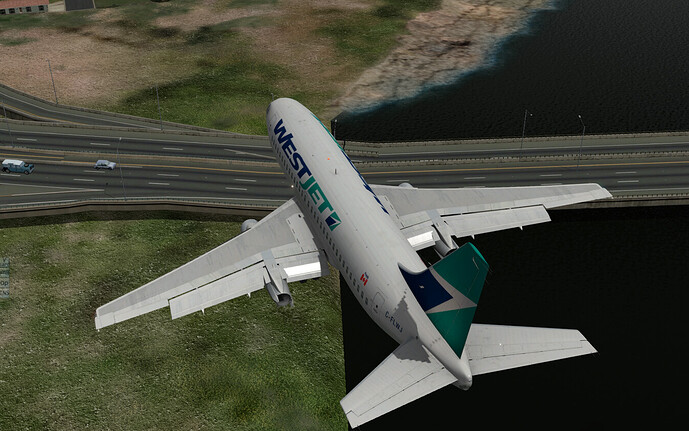 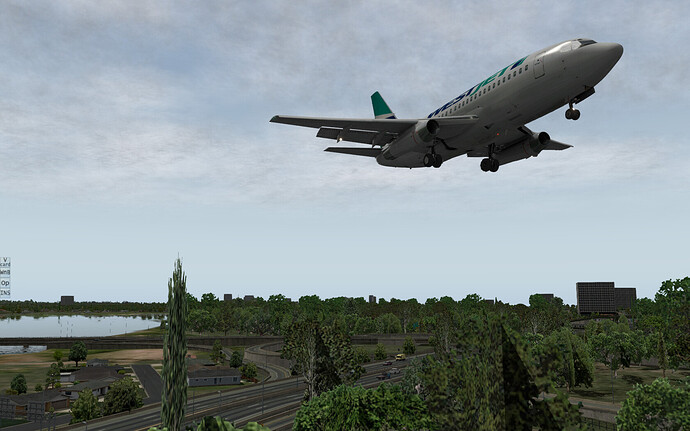 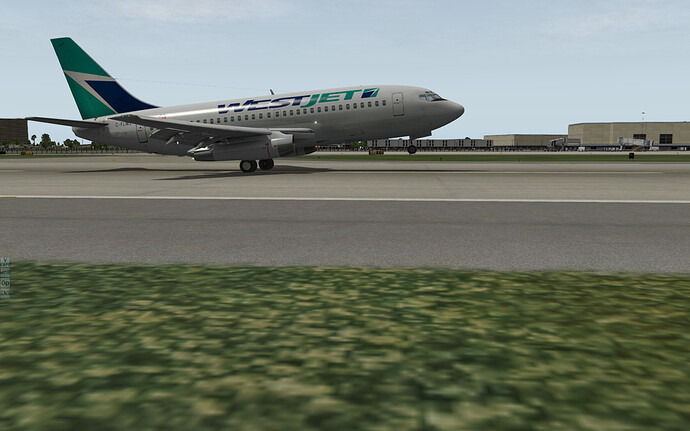 Safe and sound on the ground again, unfortunately the instant replay(alt-r) feature drained all the remaining fuel so I could not finish my taxi to a gate and go through the whole shut-down. Everything else on this flight was an absolutely delight. The FJS team have delivered a gorgeous aircraft that feels spot on(based on no experience with the 732 at all). The visuals are stunning in almost every regard(don’t look at the CB panel behind you).

Unfortunately the manual doesn’t quite explain how the Auto Pilot works exactly like you might find in most DCS modules. It shouldn’t stop you from flying this wonderful bird though, it’s easy enough to figure out given some space and time!

Now… Off to that cheap paintshop at the dodgy part of the airfield!

Fantastic AAR! How about those sounds…love the sounds. And yeah…the autopilot is pretty old school (obviously)…but so much fun with all the simplicity in that plane. Like you, I really like the TO/LD card and the weight and balance configuration pop-ups. And I can watch those reversers deploy all day. Something I love about those clamshells snapping open and closed…LOL…

Oh I haven’t even tested the reversers! plenty of runway to just use low auto-brake and a long flare. The sounds are awesome although I was flying with music on in the background so I haven’t fully experienced it yet ;).

One thing that appears missing is the CWS mode, Control Wheel Steering, if you leave both the AP and the FD on off/man and engage both AP channels then it becomes an almost fly by wire mode, where you can neutralize the controls once the pitch and roll are at a desired angle, much like an auto-trim.

Unfortunately the manual isn’t as extensive as I’d expect. Then again it has me googling and puzzling more which is also worth something

Spend some time experimenting with the AP/FD and suddenly found myself in a gorgeous shot:

On the move again to the Dominican Republic, I love XP-10’s visuals!

I don’t even have to try 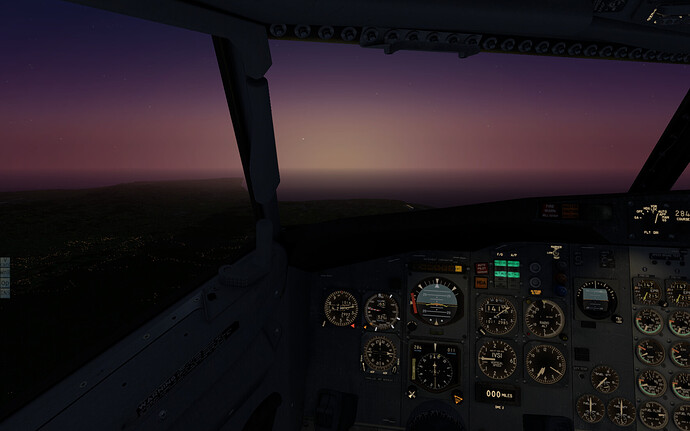 Almost there, no ILS, VFR approach with broken clouds at 2000, atleast I have no mountains to worry about.

I manually extended the landing gear with the mouse instead of a switch on my HOTAS. This was a misstake.

I should have turned on the floodlights…

Atleast the approach was fun, getting the feeling for crosswinds and maximum flap extension. Testing how short I could land despite the runway being 10 000ft. Shame about the gear deployment.

It’s amazing how slow the final bit of the approach can feel in the dark, the runway being the only reference outside compared to the motion.

This is the real MDCY:

This is the default MDCY with the Airport Prefab pack to populate it, otherwise it’s pretty much a empty affair.

You can see it intersecting the highway. So I figured, why not get one of the Scenery Gateway packages? Often times it has a better representation then the default airports when there hasn’t been given much attention to them.

Unfortunately it had a very warped ramp and didn’t work with the prefab package.

Being able to accurately generate detailed scenery is something I find extremely interesting. It has been made easier thanks to the OSM project, without which XP10 and FG wouldn’t be able to be as accurate as they are. Let’s hope in the future the workload on the artists can be reduced!

Not my best parking job I suppose, the Prefab Scenery is great though, really brings the airports alive!

A long long time ago I flew around this region with the Tinmouse 732Adv for Flightsimulator 2004, I did install the PS Panels though, which is not quite exactly fitting but I thoroughly enjoyed it coupled with the VAS FMC project. My favourite livery back then was the yellow DHL in contrast with the silver wings.

I did a short flight from Santo Domingo to Puerto Plata, as it turns out the paving job wasn’t completed yet at Plata but that did not bother me too much.

Early mornin pushback. Glad I got that coffee in! Weather is looking good with broken clouds at 2000 and a stiff breeze coming in from the sea as one might expect. Cruise will be about 20 minutes at FL100 and then decend into the approach.

Soon enough the sun starts playing with the surfaces scattered throughout the cockpit, distracting me from the task of navigating, almost missed my steer point!

I think I am loving this plane a little too much! Everything feels quite polished, although i haven’t gotten the weather radar to work even though it should according to the manual.

I think I am loving this plane a little too much! Everything feels quite polished, although i haven’t gotten the weather radar to work even though it should according to the manual.

(I’m sure there will be a holiday sale…)

I was hopeing to go for something smaller to complement the 737, not go all in!

I was hopeing to go for something smaller to complement the 737, not go all in!

Do you already have that Twin Otter? It’d be a good island hopping bird…

Do you already have that Twin Otter? It’d be a good island hopping bird…

Nop! Got the 732 as the first payware bit, thinking about the CIVA INS now but I’ll get that after buying another addon, I can then just use the redeem points.

There’s a bunch of smaller single and twins on the store that look very attractive, I think it’ll come down to which one is on sale on a good day

Guys, you realy dont need to quote when you qre replaying to the latest post

You probably need it like a hole in the head but the 727 Series Study v2 is on sale…doh!

I am going to try and not buy it, I’ve been hovering with my hand over the CIVA INS already…

I’m not going to try to not buy it too.