First mission headed northbound out of KEAT - wow…the scenery in that direction is gorgeous. Of course, as @jross mentioned, you’d better be VFR or at least know how to get out of KEAT with an IFR departure procedure because those hills north of the field get pretty high pretty quick. Probably worthwhile to look up your best angle and best rate of climb speeds…

Had to make a pit stop to watch a Marvel movie and eat some chili. Considered leaving the plane on autopilot, but I’ve had those things go wonky on me…or ice up…or something. Getting back to it a few hours later it was a bit more murky and late in the day. Canada just beyond the airfield there…

Coming out of Scott/Oroville I had around 455 pounds of shrimp. I added fuel until I reached MTOW because I want to know what the Husky will feel like when I’m loaded to the gills. Better to experiment off pavement with no real climb requirement. I used Flaps 10 and she came off in good order. Even at MTOW we were doing about 900 fpm…

First, I had that crash when I arrived as KMOK. But when I logged in last night and was parked at KEAT, I unloaded my cargo I got a mission complete? Weird. So I went looking around and AH2XP still had me listed at KMOK. Oh well.

So to get back to KEAT, I reset my aircraft position to KMOK and flew south east to 43D to pick up some fruit. I hate arriving home empty handed but this let me try out a ferry flight. Set that up between KMOK and 43D and flew it without issue. Landed in 43D, finished the ferry flight and started the transport mission with no issues. Well, almost no issues. That C172 wth almost 600 pounds of fruit was at the max weight i could load within GD limits but I had to hand fly it all the way to KEAT as I couldn’t trim the nose down enough to engage the autopilot. That is the most heavily loaded C172 I have ever flown and it was an eye-opener; between the turbulance that Active Sky introduced and the continuous forward stick it was a challenge to land her smoothly :-).

I did try to move that job to MAD but it messed up and somehow moved a different job instead. I will try that again tonight. It does seem like a challenge to find return missions and stay 100% efficient but I would guess that would be a problem in the real world.

That crash that you guys are seeing looks like a dev/AH2XP problem. Good lord. Is AH2XP written in Visual Basic?

I was promised bad weather. It is gloriously nice here in central Washington…

Help…I had to divert to a field about 10 nm away from my destination. It got dark before I could find the damn turf strip at WN47, and apparently they do not have lights. At least I couldn’t get anyone to turn them on if they did. Hills at one end and surrounded by trees, I shot 4 or 5 approaches that were not even on the property, so decided to try again in the morning when I can see the damn thing.

I parked the Arrow at the FBO and heading to Motel 6 in Shelton. Do I stop flight monitoring, or let it run until I can fly the short leg in the morning? TIA

Do I stop flight monitoring, or let it run until I can fly the short leg in the morning?

Excellent! I got successfully checked out in the 180HP Super Cub!

It’s not a badly equipped little bird, actually. Got a few handy engine gauges for a bit of detail, a basic autopilot, a couple of VOR receivers, a GPS and an ADF receiver by the looks…should be fine for a bit of IFR.

She’s not a half bad climber with that 180HP engine, either. I was skidding around on the concrete with those tyres a bit, that effect seems a bit overdone, but who knows…maybe they really are that skiddy. 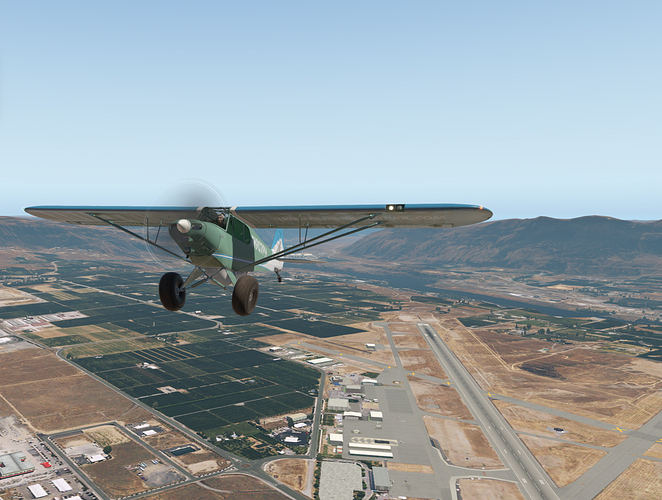 Now to look for a job! Get a haircut and get a real job, like they say in the song.

Unfortunately, I was using that hotfix when I received the exception. I’ve sent Slopey my company db, and he is taking a look. I sure do like how quickly that he provides support in his forum.

Having a really dyslexic morning and posted my flight update in the new MAD aircraft thread. Relocating here.

Woke up in Shleton, WA this morning sharing my pillow with a very large ant. Had a Twinkie and FBO coffee breakfast and was rewarded with 450 over. With a destination field elevation of 344, that would give me about 100 ft to work with. Did I mention that my IFR chops are currently non-existent and this would be below my personal minimums anyway? What to do but scud run! Bought some fuel and got the heck out of Dodge.

The actual ceiling was around 550. The terrain feature of the GTN750 was very much appreciated, even if my destination field was not in the database. I Fly Vallies.

Finally on final and get the “your DG is 1 degree off magnetic” message. Disabled.

We get down OK but during cargo offloading get an exception error and no credit for delivering the beef. F-me.

Oh well, early days and to be expected I suppose.

On my way from KEAT to CZBB with a load of medication. Was lucky to find a route with a return cargo. We will see how this goes. 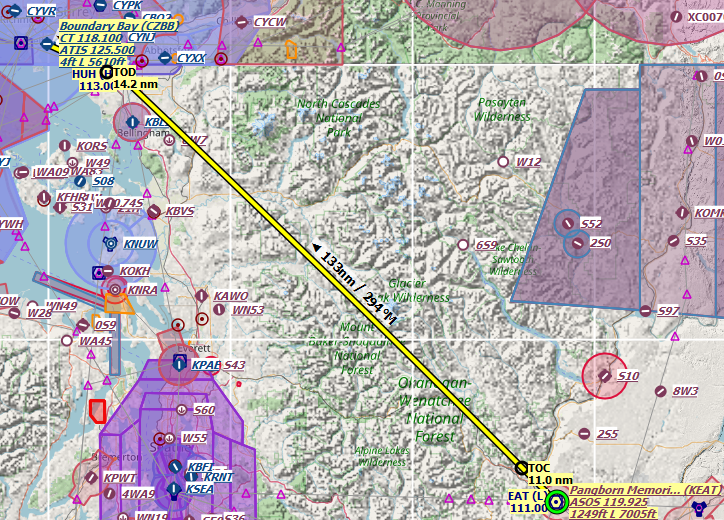 This is my first flight with reduced fuel. Hopefully I am planning this out correctly 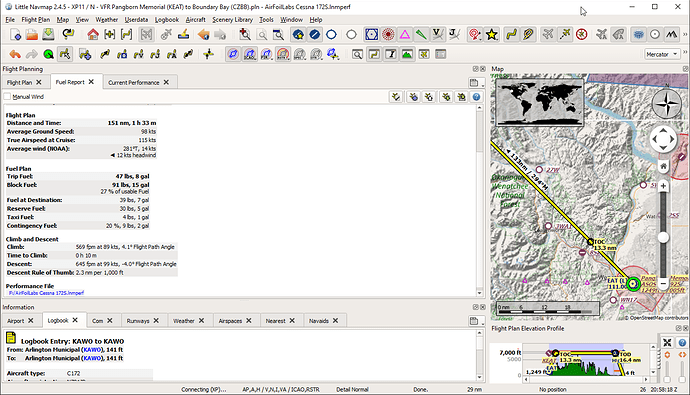 But I may have to opt in to some IFR following…

Thanks for the file - would never have found it otherwise!

…with a load of medication. 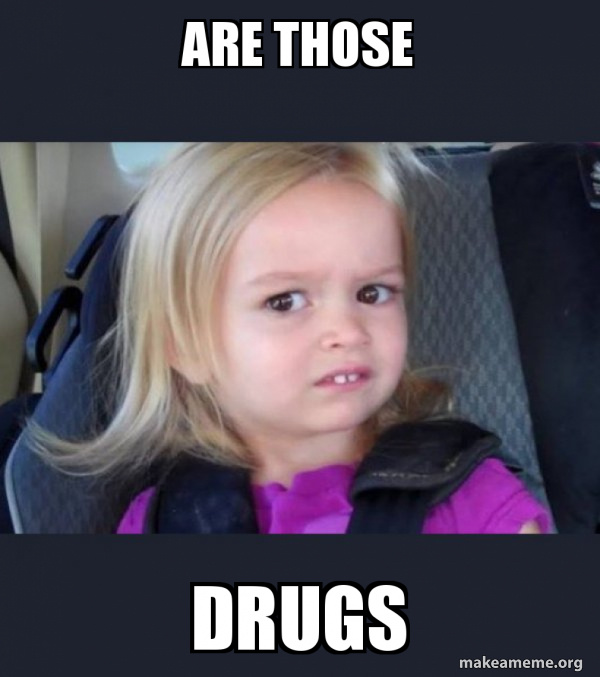 Shhh! I thought I was supposed to be bringing cheap generic drugs from Canada, not to Canada.

IT IS BUMPY coming out of KPUW. Whew.

My prawns are all bouncing around…

Hmm…heading to Acme Field, WA (I assume that is where Wile E Coyote keeps his artillery?) but Google maps isn’t being helpful on identifying exactly where it is. LOL…

It is variously listed as 06S or WA12 depending on who you ask.

1,400’ turf runway…gonna see if I the LAT/LON on Google maps will give…me a better idea… Looks to be near…ah…I found it. Sorry. Typing in real time as I’m searching. Between the river and the road. 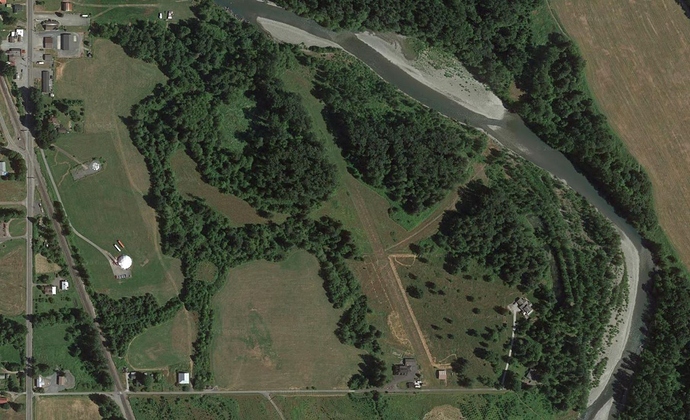 Looks like I can fly direct Mears, head west along the Skagit River and then pick up the Nooksack River to take me there. Oh…I forgot though, I’ll have the GTN since I’m taking the Husky…so not as much as work as the Bush 172…

Well, I just went to take some animal feed to Merritt, BC, Canada…got my attitude indicator paid off, but something was wrong with my GPS, I couldn’t turn it on. And I’m in Canada. Ah well. I’ll see you guys when I make it back.

Outbound from CZBB with jeans … or something

I find it interesting as I’m flying from KEAT that if I look toward the coast (west) I can see tons of AI traffic plying the routes out there. 75% of them appear to be Alaska Airlines. I only occasionally see them in close proximity (probably because the schedules are based on real world schedules and there isn’t much going on out in the middle of Washington). Anyway - it was neat seeing them all lined up on arrivals into Seattle last night.

@fridge forget where I asked this and I can’t find it to see if you answered. What traffic add-on are you using? I know beach has them all and a couple that aren’t released (paulrix syndrome) but just curious what people are using.

And if what you’re using has an atc component that isn’t terrible like xplanes.

It’s a long shot, but Fridge were you using XP11 ATC? I know that most of us don’t, but just curious if it is handling all of that AI traffic. I used it this morning KTCM > KBVS and as I taxied to the active and waited for clearance onto the runway, a Cirrus jet landed. After I departed, I got handled fairly routinely, being handed off from Tacoma tower to Seattle Center. I had one or two altitude and heading changes, then was told to resume own navigation, which was direct to KBVS. I was told to descend about 20 miles out, at which time I executed the stored visual approach to runway 04 in the GTN750. Without being handed off, Center vectored me to the approach course and continued giving me directions to descend. When I was about 5 miles out and reported the field in sight, I was given clearance to land, even on RWY 04 though there isn’t an operating tower at KBVS. The Arrow’s autopilot is basically a wing leveler, that will track either a heading bug on the DG or GPS nav. But no altitude hold. Once I got a little distracted taking screenshots and was told to descend back to my assigned altitude, 6k.

It actually went pretty well, except for ATC kept giving directions to the same Cirrus jet, like it had followed me from Tacoma. What felt like a hundred calls to the Cirrus. I turned down the volume after a while, and kept one eye on the scrolling text.