Anyone going to FlightSimExpo 2021?

I’m going to take my oldest and check it out today. I’ll type something up afterwards, if anyone is interested!

I’ve been keeping an eye on Twitter feeds and posts from a couple sites and folks I know who are still in San Diego.

We'll be bringing you the latest from the show right here in real time.

Spudknocker is there. Say hi to him for us! “As always…” 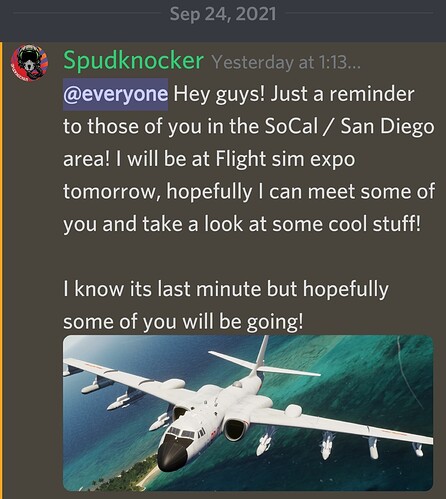 That was interesting, that tomcat reveal was awful. But the rest is very intriguing.
Does it all look a bit “rushed” (without wanting to sound negative)

The Good:
Times look good if you’re an aspiring heavy driver! Thrustmaster had a really interesting Boeing yoke and throttle combination, along with an Airbus inspired side stick and throttle combo. Quality felt fine. Not as nice as the metal Warthog and Hornet. They had those on display too, just the sticks, I don’t remember seeing the throttle. I mention it only to suggest that those product lines are going strong.

Honeycomb Aeronautical had their Bravo on display, and there was a Turtle Beach display with their new kit. Quality looked great on both.

There were a few other well known brands that cater to the civilian aircraft market. No military simulation presence, which was disappointing.

Yaw2 Motion Simulator had two of their setups on display, which was cool. Nice to see the gear in person! Unfortunately, they were having some hardware difficulties setting up, and with a five year old patiently in tow, I didn’t have the time to wait for them to get it sorted out and start doing demos. It looked pretty slick and compact, or as compact as it can possibly be while still swinging your feet around in a 360 degree circle! They said they’re taking pre-orders, but I don’t know if they’ve started shipping any sets out yet, even to the kickstarter backers.*

There was another fellow demo’ing a full motion rig. Basically, a walk-in bowl mounted on ball bearings with an arm that moves the bowl around. Pretty large, so overkill for the typical simmer. Looked like he was catering to the professional market.

Redbird had a very nice setup on display, with instrument panel and very nice light civil throttle quadrant. Cool to look at, but as an almost exclusively VR simmer, not my market any more.

The Bad:
Unfortunately, I was a bit underwhelmed, in all honesty. I know COVID really put a damper on the number of vendors and participants, but I was also a bit disappointed in the exhibitors (but this might have been organization related). Expo started Friday. Floor opened for attendees around 0900 on Saturday, I think, and we walked in around 1000. I’d say 50% or more of the exhibitors were still setting up. Some of them still hadn’t finished by the time we walked out. With the exception of hands-on the new Thrustmaster products and seeing the Yaw2 kit in person, there wasn’t a lot to see that you couldn’t just find on the internet.

No military simulation presence other than the Thrustmaster folks running DCS in their demos.

The Other:
There was a strong civilian flight training presence. Lots of vendors were marketing to that audience. There were a lot of 15-20 old attendees who looked to be interested in learning to fly or careers in aviation. As much as I love simming, I wonder how many of them will just take the plunge and get actual lessons. I’ve spent far more on my sim rigs in both time and money than it costs to get a private pilot license!

*At some point, I want to get some quality time in a full motion rig with VR. I’m extremely curious how well these setups can trick your vestibular system into thinking you’re actually flying. For example, using software to translate the aircraft movement into motion simulator movement that deliberately instigates ‘the leans’ in order to trick your brain into thinking you’re in a loop, without having to actually fling you upside down, or using a bit of pitch-up and down to give the feeling of acceleration. Gs are still out of the question (or at least, I can’t think of a good way to truly simulate those)!

At some point, I want to get some quality time in a full motion rig with VR. I’m extremely curious how well these setups can trick your vestibular system into thinking you’re actually flying. For example, using software to translate the aircraft movement into motion simulator movement that deliberately instigates ‘the leans’ in order to trick your brain into thinking you’re in a loop,

Full motion is overrated. It’s great for airliners but really only in the up/down axis. Up for acceleration, down for deceleration. Yaw axis is OK for engine failures. Everything else is way off because it has to be. For upset training (aerobatics) we turn the motion off. One, it’s potentially damaging but also it is just a terrible physical representation of how such maneuvers would feel in real life.

ALSO, the XP12 video above is well worth watching. There are details to be learned there that I haven’t seen mentioned elsewhere.

Honeycomb Aeronautical had their Bravo on display

Other folks I know who were there were showing off other Honeycomb gear, including their new Charlie rudder pedals, a gaming chair, and their answer to the Thrustmaster T.1600- did you get a chance to see those as well? 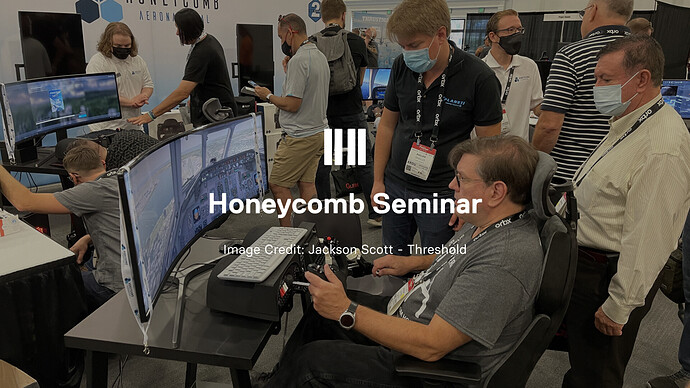 On Friday, Honeycomb Aeronautical has unveiled an accoutrement of new products from flighsim chairs to new yokes and controls to their lineup of products ahead of Sat - Threshold: Question the Answers.

I think I saw them in passing but they didn’t blow me away, mostly because they looked geared for the console market. Not that that is a bad thing! Always good to get more people in to the genre, and I remember when even having a separate throttle seemed extravagant to me, let alone rudder pedals!