Bohemia is announcing something about ARMA on May 17th, as announced on their social media channels.

Hopefully, it’ll be A4 news and not another cDLC announcement. 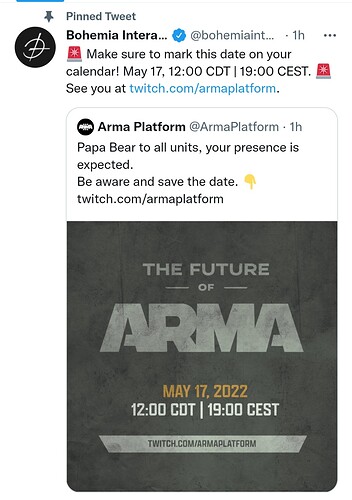 and when they announce they are still using the same engine, I want everyone to riot like they did when DCS 2.5 still had the same engine at it’s core. … lol

I foresee a passage to Unreal engine.

Not sure about unreal engine, the house made Enfusion engine seems to be the vehicle of choice.

There also was a screenshot on a re-made Everon within Enfusion lately: 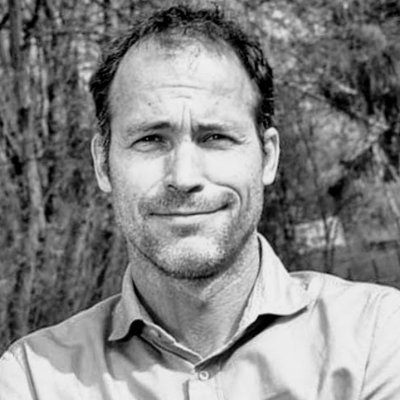 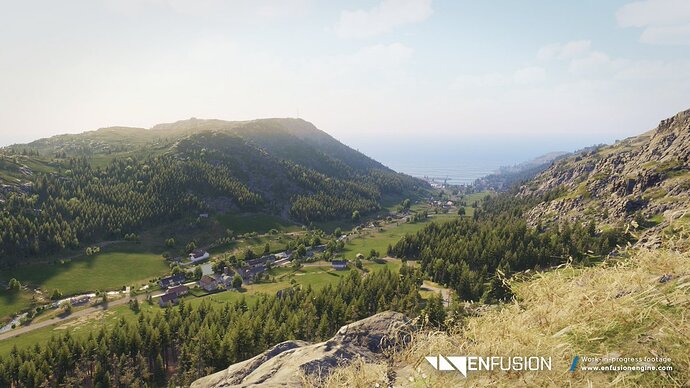 The third part of our documentary series Bohemia Interactive History is out! 🔥 In this episode, our CEO Marek Španěl will dig into the development and release of the successful Operation Flashpoint/ARMA: Cold War Assault. Read more at 👉 https://t.co/rKctfuWs76 https://t.co/bwadAcaA4r
2 Likes
komemiute May 13, 2022, 7:01am #5

Unsurprisingly. I was wrong.

It was speculated on Reddit that maybe ARMA is going the DCS route and being a platform. You can see in the twitch link ARMAPlatform. I’m not sure how I would feel about that. As a consumer, I would prefer prefer as-is. Maybe Bohemia just wants to do the engine development and let 3rd party developers actually develop content.

So would you have to buy the AR15 module or the frag grenade module… would this even be down to the 5.56mm or 7.62mm modules

So how many people still play Arma 3?

While I played every title from OFP through Arma 3 and the first few DLCs, this was never a DCS World or even Il-2 type situation. They never improved the base game meaningfully. It was obvious they had not switched to that model, they were still on a “you’ll see better stuff in next release” model…but then they never released an Arma 4. It’s been over 9 years now.

I hope they do and it has a next-gen engine that doesn’t need to be Unreal 5-level (although I wish it was) but at least Unreal 4. Their awful animation system needs to die.

I’m tired of mods. Sure, an Apache or M60 or something that wasn’t in the base game is fine, but not messing with the interface and changing the healing mechanics and all that crap. I don’t have time for that anymore. I hesitate to use the term “lazy” for Bohemia because I’m sure they didn’t work 5 hr weeks and goof off the rest of the time, but it rather seemed to be a lack of ambition. They didn’t shoot for the stars and fall short, they didn’t aim for the treetops and barely make it, they aimed for the lower branches and did a good job of making it there without falling.

They may not want to try a moonshot for Arma 4, but they at least need to try to leave the ground behind for the first time since OFP in 2001.

I hope not unreal 4 engine, its the most overhyped engine. Every game made with it, have very unreal over light global light, bad performance (comparing with other engines) and disgusting and immersive killer popups and low distance shadows, that when you move, you see that around you have shadows and when you move you see the too much lighted world being darked shadowed in a hard limit. Its really ugly when for example you are driving a train or a bus and enter in a dark lengthy tunnel, between you and 50m in front its dark and after 50m its like day and while you drive you are darking the lighted area, its so bad…
it not have a smooth transition of shadowing and have bad LOD transitions.
For example if you see any shooter or simulator with unreal 4 vs for exmple the impressive hunter call of the wild you will see that exist much much much better engines.

I also hate mods because what you mentioned, but 80% of the commercial success of arma is also because its mods, its like what happens in civil flight sims. Also you are not obligated to install any mod.
Its why since 20 years ago i stopped to install free mods to any game or simulator with only very very very rare exceptions. Usually if even a paid company do mistakes and bugs, imagine what the free side can do when they not have any quality control or obligations with them…

There’s no indication of ArmA 4. Expect ArmA Reforger to be its own project, possibly another cDLC or even another expansion.

as far as content. its already that way pretry much.

but if tneu want to do land air and sea.
maps are too small for air and too big for land… lol

Yes, I forgot about ARMA Reforger. I thought the rumors were BS, but all the Enfusion screenshots appear to be from Everon, sooo, updated OFP. And Marek Spangel just teased another item on Twitter. Last year ARMA Reforger was allegedly supposed to be released in June 2021 on the 20th Anniversary of OFP. It allegedly delayed. Marek’s post indicated 17+5 = 22 June 22, 2001 was OFP’s release date. Perhaps we will get Reforger on June 22, 2022? Any bets?

I think it’s as reasonably safe bet as any. My concern is that it’s supposedly MP only.

In case people haven’t popped in over at r/Arma over at Reddit, apparently the marketing details for ARMA Reforger have leaked.

https://www.reddit.com/r/arma/comments/upgink/arma_reforger_marketing_and_brand_guide_leak/ There is a file to download that has quite a bit of information.

Apparently the purpose of ARMA Reforger introduce Arma to a new (console-oriented) audience.

I’m a bit concerned about the Game Master scenario editor. Hopefully they don’t dumb it down and only do a Zeus type of thing. To make this viable, we would need the proper scenario editor to make proper missions.

It’s good to see that modding and workshop is available. Maybe a lot of mod makers can port over A3 material.

They indicated that this is a ‘premium’ product. I wonder how much ‘premium’ will cost, considering only a ~55km2 island and small assortment of vehicles/weapons.

That first campaign was really good.

The only real way they can fumble this is if they make the PC version an Epic exclusive or something.

a remaster of OFP

Never before been so immersed in a FPS, or since.

I’m going to ■■■■ off all the PC elitist by saying… hope it’s coming to CONSOLE!!! Just Saying. lol