Once upon a time we had the magnificent Chatbox that could annoy Fearless Frog and bring us so much enjoyment in quick banter and mostly random words interspersed with interesting questions.

And now I have questions, but no long ones. Just small, tiny ones where I’d love to get the input from the community on them. So this thread is all about questions you want to ask or things you want to say that do not deserve their own thread!

Let me kick it off. I’ve been building building my own checklist from a few different sources for a 737-200. Some sources suggest starting with engine 2. Do any of our pilot brethren can explain this, and not in the technical sense but in the procedural sense? What would be a good motivation to start with 2 as opposed to 1(or however many engines you have).

In some aircraft, it is suggested to start the engine with the shorter cable run to the battery. Of course, with an APU…that is a moot point… (And I’m just parroting what I was told…no idea if there is a significant amperage drop over an extra 10’ or more of cabling…)

There’s some drop, but that shouldn’t matter that much unless you fear for your battery. A longer cable has a increased resistance and amperage is a factor of volts divided by resistance. So a higher resistance means a lower flow of electrons.

I’ve read safety considerations, starting with the engine you can’t see as pilot. But that makes not a lot of sense to me since most 2 engined aircraft also require 2 pilots, does this sound plausible to you?

Not a question just had an idea

Well I have to get technical but it’s easy. There are three sources for bleed air. The APU and No.1 engine supply the left duct and the No. 2 engine supplies the right. Separating the two sides is an isolation valve that can be opened so that a single source can (if able) supply both packs or crossbleed start the other engine. So, to answer your question, there is no hard reason to start No. 2 first unless you are planning a single engine taxi AND wish to keep things as comfy as possible in the cabin. In which case the No.2 can supply the right pack and, with the isolation valve closed, the APU can feed the left pack and start the left engine when desired. Since that is such a common configuration it’s just easier for consistency to always crank 2 first.

Now you might ask, why not just start 1 first and run both packs with either the left bleed or the APU with the isolation valve open? Because doing so is stupid! No, really because there is a limitation on old generation 737s for running both backs from a single source on the ground. And, baring that, neither the APU nor a single bleed is anywhere near strong enough to usefully source both packs. With the new gens we can but it works much better the old way. The only time I ever crank No.1 first is if we expect late bags after pushback.

Interesting, I’ve considered that but given that I had this from a -200 manual with the ol’ JT-8D15 variant, that requires a minimum of 5 minutes engine run time at taxi power before take-off. So it seemed a bit, tricky. Note that this requirement kicks in if the engine has been off for 2 hours or more. I’d presume it is to get the fluids up to temperature.

But that makes not a lot of sense to me since most 2 engined aircraft also require 2 pilots, does this sound plausible to you?

Well, I’m not sure on the statistics, but there are a lot of twin engine aircraft that don’t require two pilots. Even the Citations I fly can be certified for single pilot operations…and probably most King Air operators use a single pilot. Almost all piston twins are single pilot.

Some aircraft have certain accessories that can only be run from one engine or the other - for instance, the King Air B200 has the air conditioning compressor mounted to the right engine, so you’d want to run that one if you are interested in cooling the aircraft.

Re cable run - I think it was mostly for piston twins that do require a lot of oomph to get those pistons turning over. I seem to recall the Cessna 402 had a recommendation to start the engine on the side where the battery was mounted between the nacelle and the fuselage…or maybe that was the Baron, I can’t honestly remember that far back.

Re cable run - I think it was mostly for piston twins that do require a lot of oomph to get those pistons turning over. I seem to recall the Cessna 402 had a recommendation to start the engine on the side where the battery was mounted between the nacelle and the fuselage…or maybe that was the Baron, I can’t honestly remember that far back

Voltage drop is the real culprit, as wire will naturally act like a resistor, the more the longer the run.

For a piston engine with an electric motor as a stater, current can have some serious implications with respect to the large initial I rush currents you get from starting a motor - that can reduce the life of the starter motor or damage the insulation in the power wiring, in really bad cases.

I was not aware these planes could be flown single pilot, very interesting!

Yep, getting that first crank going on a piston does require quite a bit of oomph. Gas turbines do still have a insta-kill voltage on the igniter/exciter though, those are always some of the beefiest cables that run through the engine.

I’ve suddenly found myself very interested in celestial navigation. Are there any X-plane aircraft out there that support it?

Another thing to consider for other aircraft engine start order is what’s powered by that motor. What I fly, you start the right first because that supplies hydraulic pressure to fairly important things like, you know, brakes.

Right, that’s my first thought too, but when everything has been done with a double redundant system then that reason kind of disappears. I suppose that’s definitely a good reason on certain types though.

@Navynuke99, I call upon your salty wisdom.

I’ve managed to find a resource that lists which air wings (and their tenant squadrons) deployed on which carrier for each cruise dating back to the 1950s. You happen to know if anything similar exists for the surface escorts? This is useful info for mission design.

Yikes, that’s a tall order. This would be where I would start:
http://www.navsource.org/

For the iPad/iPhone inclined among us: 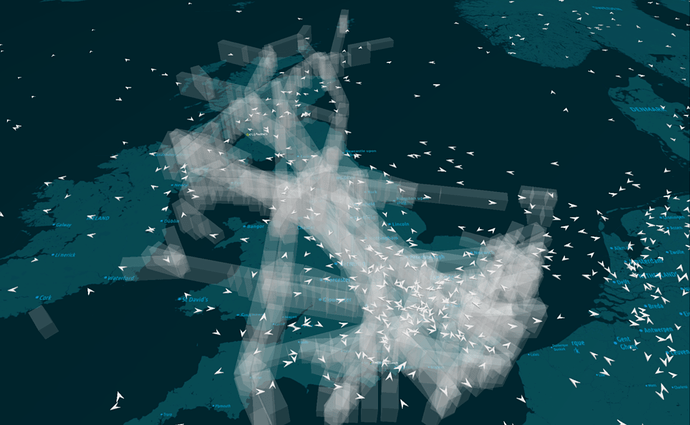 Earlier today we announced the launch of our beta flight tracking app, Airspace Explorer and I wanted to share with you some of my favourite features.

Something you could loose hour with

Once upon a time we had the magnificent Chatbox that could annoy Fearless Frog and bring us so much enjoyment in quick banter and mostly random words interspersed with interesting questions.

It got moved to here, but I can’t remember if a memo was sent out. Anyway, it lives on (go to Categories, go to Hangar Flying, look up), kinda:

I’ll try to update some stuff here next weekend, and can switch the wee ‘megaphone’ thing back on if the bugs that bust it are fixed (I think they are but haven’t had time to try it). 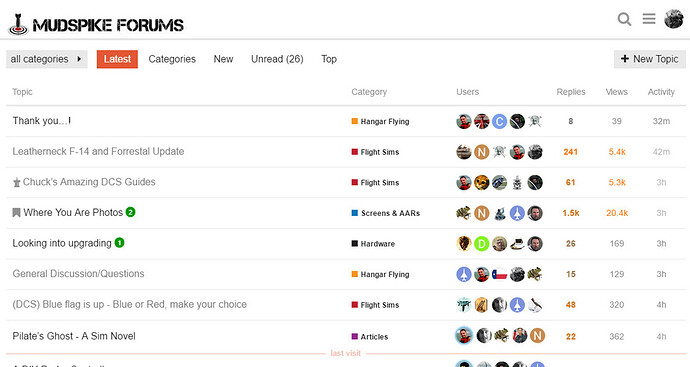 Minor suggestion, is there a way it can be added to the all categories page as well?

Ah, that’s why I missed it! I am on the same page as NB is since that got changed to default.

I’ll take a look, but the guy that did the chat sort of thought that there would be a ‘chat per category’ (as in we just have the #hangar-flying chat ‘channel’ going, but in theory we could have a ‘channel per category’), so putting it on ‘all’ sort of goes against that thinking. I agree the discoverability is awful, but now we all know I guess we just tell people

Ok, a quick hack - I’ve added a bullhorn icon up top, it’ll link to the chat page so that people can actually find it now. The chat is still pretty buggy though, so definitely worth what you paid for it…