GOTHQ Get Out The Hangar Queens AJS-37 Viggen

Gentlemen, this month we fly the Viggen, a remarkable aircraft and an impressive feat of Swedish engineering and commitment: it says something about the aircraft that during the 1960’s the Viggen accounted for 10% of all Swedish R&D funding.

The Viggen version we have the privilege to fly has a number of remarkable features unique in the DCS context - ground radar, ELINT capabilities and advanced anti-ship munitions, to name a few.

I don’t need to tell you that reading Chuck’s Viggen guide front to back and back to front will be the natural first step on this journey - but as you find other useful resources, please share them here.

As is tradition (can we say that on month 3 of GOTHQ? I think we can), please share your journey here and let’s all make @Troll proud (or distressed by the number of burning Saab wreckages - but I hope a glass half full approach applies here).

I’ve been learning to fly the Viggen for the past week. Just finished reading the manual cover to cover, and now working on Chuck’s guide. Having an absolute blast with this plane, the design philosophy is so completely Swedish than anything else I’ve ever touched.

Excellent - good to have you onboard @warpig!

First comment: sorry @Troll .I thought I had the thrust reversed. I didn’t. 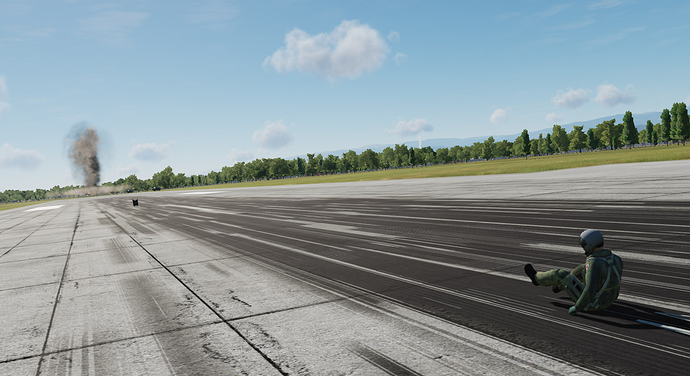 Second observation…wow. This thing goes like the clappers. I can’t even begin to describe how far behind the aircraft my brain was. Hitting M1.2 at treetop level after flying around in the Hip for a month topping out at 300kph…I have a bit of brushing up to do

I thought I had the thrust reversed

JFC! If the crutch handle is in, it’s not in reverse! How hard can it be?

how far behind the aircraft my brain was

You must think in swedish…

If there is one thing I have found the Viggen does exceedingly well, that surely would be Fassssttttttt ! Thing is a bolt of lightning and will leave you well behind the curve if you give it half a chance.

In its early years I am sure it performed well as a Multi Role fighter. Yet later on the Strike Fighter role seems to fit it better from what I have been able to pick up in my time with it.

How hard can it be?

Well, in my significant experience in this aircraft, the first thing to do is not to mistake the autothrottle handle as the thrust reverser handle - that makes a big difference in how well she slows down!

not to mistake the autothrottle handle as the thrust reverser handle

Ehm… The only thing those two handles have in common is that they are both situated on the left side of the cockpit.
Other than that they are a meter apart… The Rev handle is on the instrument panel and the autothrottle, or Automatisk Fart Kontroll, handle is behind the pilot, close to the gear handle.
If you’re mixing these two, we need to have a talk about your flightstatus… I’ll personally buy the DCS: Desk module for you to fly if you don’t shape up, Fänrik (2nd Lt.)!

One thing I did was try the English cockpit mod but I had learnt so much in Swedish I got totally lost. Others may find it helpful though. Also I learned from xxjohnxx videos. I will link them later

Oh I also saw a cool grim reapers video on a mass attack by viggens from different directions using the tot function. I will link it also because I hope at the end of the month we could organise a mass attack on a convoy

Imho, one of the best Viggen short movie is Nordic Fire.

Hey! No stealing my screen shots!

Just running the cold start training now. Lots of stuff we can skip but even so it’s not too bad

sorry @Troll .I thought I had the thrust reversed. I didn’t. 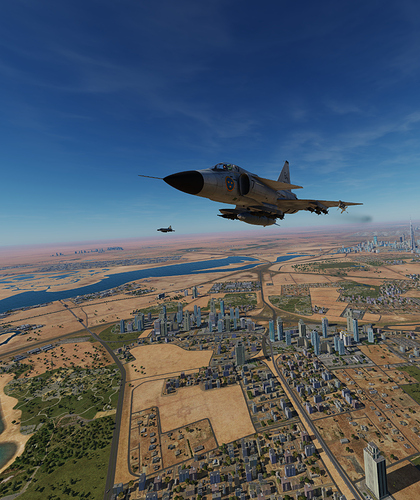 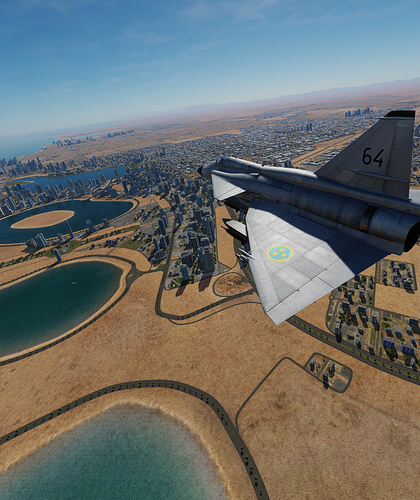 I had a go bombing a runway today. I got the bombs off but only sedtroyed about 30% I need to work on the bomb spacings. Great module, glad it is module of the month

I did a round of the training missions last night. They were nice and short, which allowed me to go through most of them in a few hours. IMHO there could be more depth into them, but it was a nice quick glance through the aircraft and what it can do.

Very early days of learning for me but I’m starting to get a feel of the user interface logic - and I like it a lot. The HUD is very different but the features I’ve learned so far are actually very intuitive. The HUD is clearly designed for the specific purpose - flying low and fast, do the pre-planned mission and get back home. The altitude poles are cool.

I was slightly apprehensive about having to punch in heaps of waypoints manually if I want to play the Viggen on the public MP servers…but it turns out you can use the F10 map markers for the purpose. Very neat! I’ve only read about it in Chuck’s guide so far, but presumably it works.

I also probably didn’t quite appreciate how fast she really is. I reckon you can get in and out of target areas in MP quite well - certainly a lot easier than in the Harrier, which can go quite fast if required but obviously can’t punch supersonic.

No one has ever been able to read this without a snicker (guilty).

I reckon you can get in and out of target areas in MP quite well - certainly a lot easier than in the Harrier, which can go quite fast if required but obviously can’t punch supersonic.

The biggest issue I’ve ever had is that if you are truly coming in cold-war-gone-hot low (ie about 1m above the top of the average tree, and dodging the tall ones), you have maybe 3-5 seconds to spot the target and engage before it’s time to be down on the deck sucking birds nests into the intake and heading for home. That’s what I’m going to be spending some time on this month is getting better about being able to popup, spot, engage, and get out, rather than loitering about.

Alright went through all the tutorials again. I hadn’t forgotten too much, which was nice. Getting comfortable with the radar again is going to take some work. And lets not even talk about ELINT and A2A.

Spent about an hour doing range work, rolling in with guns, rockets, and then bombs in a series of strikes and hot rearmings. My dive bombing actually looked okay, but I probably still spent too long in the pullup and rollout phase. Probably start the Mjolnir campaign tomorrow, haven’t played that one in a quite a while.

Nice! I’m just doing a first skim-read of the manual.

I think I’m going to create some simple navigation exercises (setting WPs in the mission editor etc.)…get comfortable with the navigation systems and T/O’s and landings before adding targets to hit.

I’m just reading about the fuel calculator and the logic…that’s pretty cool stuff. It looks like it will help you ride the max possible speed (in terms of fuel consumption) through the critical phases of the mission and still have enough fuel to come home. Neat.

And lets not even talk about ELINT

After that I may try a RECCE mission–what we in the USN call SSC (Sea Surveillance and Control) that will lead to a naval strike mission.