We might end up having to send an expedition to Jupiter… 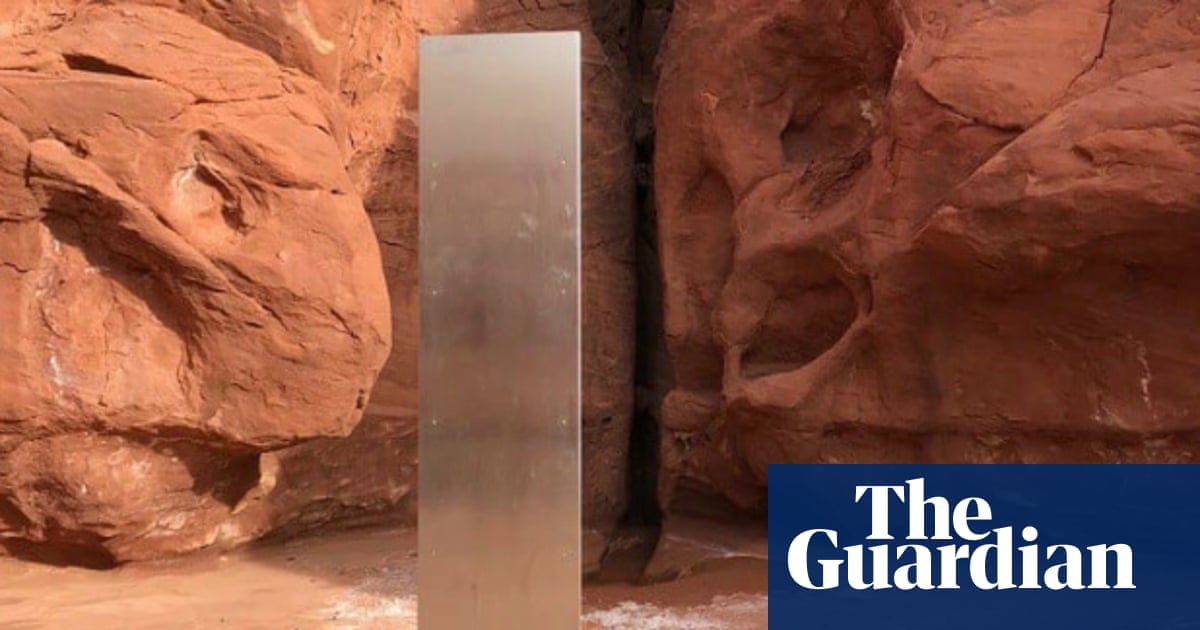 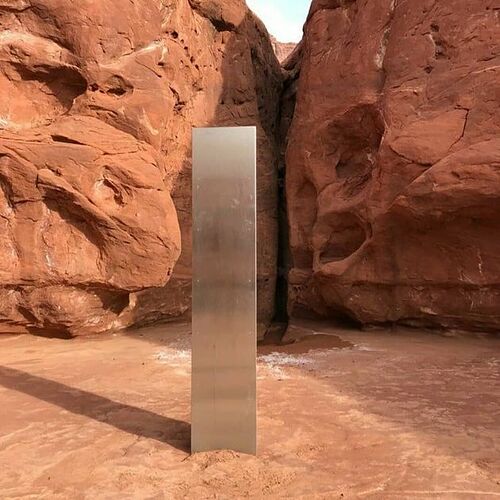 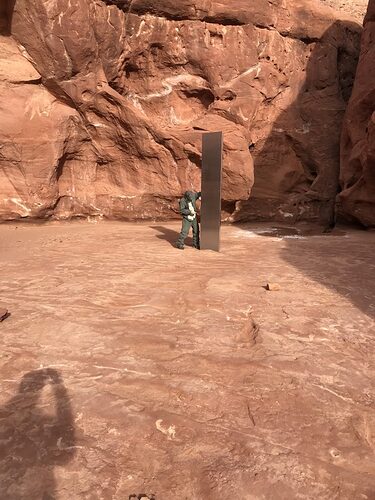 but is it art? 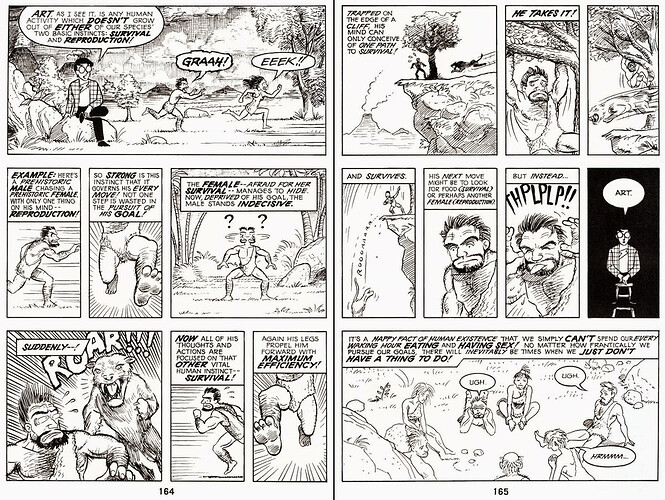 That’s quite an interesting definition of art.

While it is a funny comic I don’t necessarily agree though.
Example: If someone makes a pretty painting specifically to get into a woman’s (or man’s) pants, then it is still art even though the goal might be sex.
And by this definition most sports are also arts I guess, which I disagree with.

Absolutely understandable, that’s why it’s his definition of art and not the best or the most inclusive.
I do agree with him, but that’s beside the point.

The art professor whom I quoted would be overjoyed with and oh so proud of this philosophical discussion on the nature of art.

To me art is the pursuit of the easthethical. Those experiences that elevate beyond the everyday worries of survival and reproduction. In that sense I agree with the cartoon.

However, to dismiss art as the idle twiddling of bored thumbs does not do it justice. For the pursuit of the easthethical elevates us. It is what makes us human. It is our highest calling.

In that sense a moonshot is not only about science but mostly art. It makes us feel amazement and wonder and unity, all experiences that can only be had in that way by the performance of the men and women who thought up, designed, built and flew the rocket.

The random slab of shiny metal in the desert has the same objective. To make you wonder, to make you think and to make you feel. 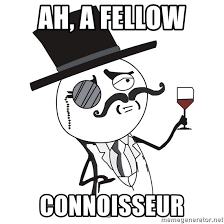 It is also a tool, but being a tool and an objet d’art are not mutually exclusive.

I have discussed this before on here. Art makes no sense to me whatsoever. I just do not get it. I don’t begrudge anyone else enjoying it and its not like there arent things that are aesthetically pleasing to me. But ill never grasp how it works

Tell you what, if you see me on Discord - call me and I’d love to chat about it.
Not to educate or anything, just chat- like friends in a bar with a beer in hand.

I’d like that bud. I am an open book and I have an open mind

But ill never grasp how it works

Oh but you do. I have seen you wax poetical of several iconic bits of 20th century industrial design such as the Victor K2 tanker aircraft or the Mi-24 helicopter gunship. You see a shape, hear a sound and it speaks to you. You don’t understand what it says even as you are raptly taking it in. Does that describe you when face to face with the Victor in the museum you pictured last year?

Of course hanging a harrier nose down after sandblasting it is just bonkers and artsy fartsy attention-whoring. It’s also kind of pretty, isn’t it? 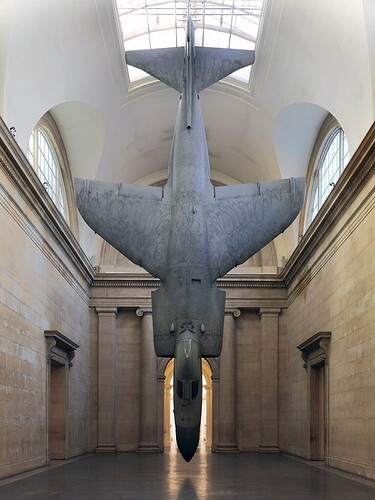 I have an open mind

That you do mate, and I love you for it.

You see a shape, hear a sound and it speaks to you

I completely agree. I see “objects and function” as a thing of beauty. I see evocative scenes like the Dambusters painting and 'the big push and get an emotional reaction to it. So yes, I absolutely agree with you.
Where I get lost with art is its value and my understanding of the piece itself.
Now, I’m not being rude. I don’t want to offend but let’s take “mona lisa” I can understand its value as it was painted by a FAMOUS artist. However objectively that is an awful looking painting. It holds no beauty to me. I don’t understand how it became what it is because its not actually a painting that has any “technical proficiency” I’ve seen a lot better by less Well known artists that are valued at next to nothing. It makes no sense to me.
Why are some paintings that can be objectively called complete nonsensical rubbish hold value?
I’m not knocking people FOR paying mega money for art. But I do not see any value in it myself.
Give me 50 million pounds and I’d buy a harrier and hang it on the wall before I bought a 50 million quid painting.

The value of a painting like Da Vinci’s Mona Lisa is like that of some overhyped bitcoin. In and of itself it has indeed little value. Just another portrait of a lady, right? But because lots of people believe those who say they did not waste their millions buying it or its ilk, it is worth millions. The monetary value of most art is a shared illusion (as is the monetary value of anything but labour, but I digress)

Now the other sort of value, esthetic value is another kettle of fish. This is part purely subjective. What does it do to you when you see it. Very little.

This might be modified a bit by putting it in its historical and cultural context. Knowing the story of when and why and how it was painted can make it more interesting. Just as Vulcan nr XM607 is more interesting because the black buck missions, and the story of the V force in general.

Or not. Truly great art shouldn’t need a story right? Or maybe that’s a matter of taste as well? Next time you see art, try and leave the moneymaking side out of it. Whether it’s worth the asking price is the least interesting question you can pose of an objet d’art.

Look at these dudes: 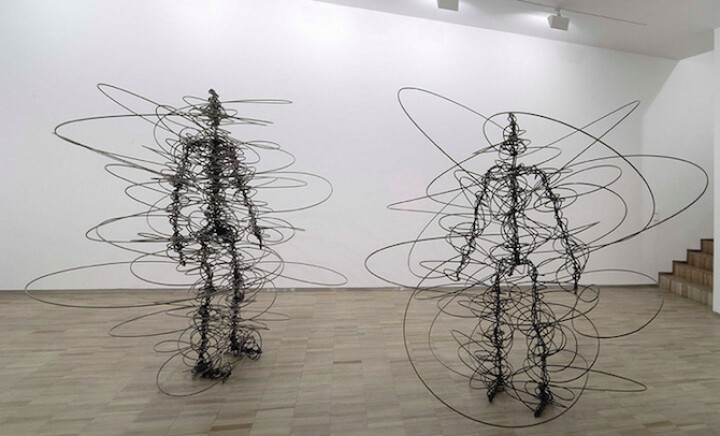 image720×436 79.8 KB
Pretty weird eh? On the one hand they are almost like the doodles of an idle hand. They are also marvels of metalworking. It must have taken the person who made these ages to get those loops right. And why would you think did that dude make all that effort to get them exactly like this? What are they trying to say? Are they trying to convey a feeling? A philosophy? I don’t know, but the sculptures sure do tickle my brain.
3 Likes
Victork2 November 24, 2020, 7:03pm #19

Ok. That was a pretty effective way of explaining your point. I see what you mean.
BTW those sculptures are amazing.

Every single point I’m typing out and deleting again has to do with money and monetary value. That’s fascinating enough in and of itself. This is a hard topic for me. I want to understand why I can’t understand it. Maybe the pointlessness of it (in my eye) IS the point?
Maybe because I have had to work so hard in my life (again, not saying I’m the only hard worker, everyone works hard) I can’t slow down enough to appreciate certain things.
This has turned into a weird introspection that I wasn’t expecting.
So now a discussion about art has made me stop and consider points that I hadn’t slowed to consider before, kind of proving your point.
Whoa.

Maybe because I have had to work so hard in my life (again, not saying I’m the only hard worker, everyone works hard) I can’t slow down enough to appreciate certain things.

Luckily I can tell you this is evidently not true. You are a connoisseur of two pretty different but pretty conventionally recognized genres of art: Computer games and Industrial design.

I have seen you give articulated opinions on the (non-monetary) value of games and machines. Admit it, working class hero, you too appreciate art!

You already do it all of the time.
See, games are art. Simulation games are works of art. Therefore, this very forum is a motherlovin’ art appreciation society!

Of course as a cultural thing, art often is a snobby, haughty, anti-working-class affair that fully deserves the disdain it so often gets. Even from the artists themselves! 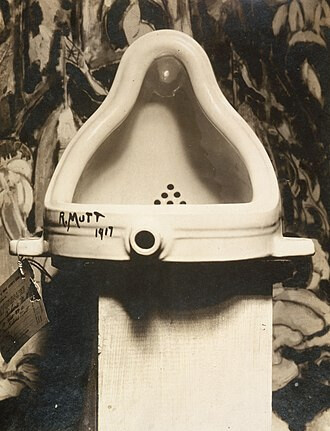 There’s a tradition of putting pissers in art galleries to take the ■■■■. I kid you not. Stupid rich folk keep buyin’ em too!