I have just realized I might harbor a serious gaming flaw within me. I discovered it when I was about five hours into Red Dead Redemption 2 and hit a wall. I felt like I was at work. I was becoming stressed and unhappy. In the game I had multiple “jobs” in my queue and loads of people I was expected to meet. Existing within that world were limitless possibilities branching out from each new experience. I could change my ammo, my horses, my hair, my clothes. I could kill a bear and have a coat made by some guy in the woods. I could mix a bunch of weeds over a campfire and make…god knows what. Its like a game within a game within a game. And I, little ole me, had near total control ovef my experience. To millions of gamers this must be nirvana. To me it has become hell!

I similarly discovered a hatred of Elite Dangerous a couple of years ago. And I thought then that the reason for the hate was the grind. But that wasn’t it. It was the crafting: the building and buying and upgrading of ships; the skills accessed through engineers. It again became work. The worst kind of work: drudgery with a deadline.

I am not whining just to whine. I want to know are there others out there like me? Am I just too stupid to appreciate the rich gameplay all these options allow? Am I showing signs of autism in being stressed about options that no one is forcing me to use? Or am I just old and harking back to a simpler time when Grand Theft Auto was asking only that you shoot people and run from cops, not search for special weeds to cure your horse’s stomach flu?

No I see where you are coming from. Sometimes crafting scratches that itch to collect and make something better than I could afford or find. Sometimes it just fills my inventory with useless items that I am never going to look at again. In my mind there has to be some reward that justifies the investment of time into crafting, something that makes it not a grind.

That being said, there are others who enjoy it, and I can’t fault them for it, but I tend to fall away from games that turn into a crafting grind.

I used to play the MMO “Age of Conan”, and one day we were chatting on our guild TS3 while playing, and one member asked another “hey, do you have a blacksmith character?” (Every character could have two crafting professions to skill IIRC). He answered “No, I don’t have any professions”.
The first member was puzzled. She asked “you don’t do any crafting?”
He just replied “yeah. Look: If I want to work, I go to work. But I want to play a game now.”

It was way funnier than I tell it now, mainly because of him being a guy with a strong Berlin accent, someone whom we didn’t expect philosophical messages from.
But then we all all paused because you could kinda understand where he came from.

I like crafting myself, but I can totally understand how you can see it as a chore. Some other guy on the net once said “I quit playing WoW when I realized I was basically doing an unpaid second job”, and there is also some truth to that.

If you play a game, play one that is fun for you. Otherwise it is a waste of your time.

I’m in an agreement also… and I play all those games that are big into it… even the new Far Cry New Dawn, which too my surprise was actually a good game and story, no stupid drug trips in this one… just a true, yet over the top, example on exactly how anarchy would work, that this kids love the idea so much… any way, back on target, since it’s AFTER a nuclear disaster, you have to find, harvest, build all your weapons… in all of these games, I find myself finding and crafting the basic weapons I need, then sticking with them all game.

I like and understand the game play mechanic if it fits the game and purpose, but not really a fan of the labor.

Only exception was Ultima Online where you could actually have proper professions and make a living in an immersive setting without having several characters.

Horizon Zero Dawn drove me nuts with the crafting thing. An otherwise beautiful game with engaging storytelling ruined by the feeling that I had to work. The Division had the right balance of crafting and action.

Is it wrong that I thought this was about a different kind of crafting?

Tell us about the “crafting” you were expecting! I am intrigued. 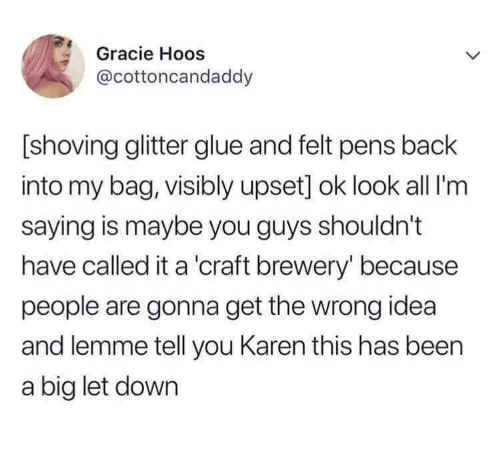 Yeah, games like Fallout can IMO go overboard with it. Then you’re affixing gems to swords and runes to leather armor in Elder Scrolls…

I mean, I did build a bunch of homes in Skyrim and so on, but it was more for the novelty and not because I really liked it.

Until you’ve replaced the dragons with ponies or trains with faces, installed an armor mod, and added an anime follower, you’ve yet to experience Skyrim.

Crafting … in my mind, the perfect amount of crafting in a game would be somewhere in between ES IV Oblivion and STALKER COP.

The first time I played through Oblivion, I didn’t craft enough…hardly made any poisons or potions, no homemade enchanted weapons, etc. The second time through (almost all the way) I overdid it. I ended up buying a house just about everywhere just to hold my ingredients and “bottles”. Did I really need something that infli five points of fire damage, drained endurance, and gave elves a rash? (The answer is no)

This time I’m moderating my crafting.

In COP I would like to see a bit more crafting, especially in terms of weapons mods. The current upgrade trees are good…could be better.

I don’t like MMO crafting at all, but a little gem of a game called Subnautica is pretty much all about crafting a home out of a hostile but very pretty environment and I loved that to death.

So yeah. I dunno. Crafting, sure. As long as I don’t have to “craft” mavericks to hang on my hawg.

As long as I don’t have to “craft” mavericks to hang on my hawg.

You must destroy 20 TV stations to collect enough parts to make a single TV seeker. Hammer in 50 Sidewinder missile seekers to make a IIR Maverick seeker. Craft 20 2.75" rocket motors to make a Maverick missile motor. And sacrifice a Mk82 bomb on the Altar of Shaped Charges to get a warhead.

Calm down there RUST

it depends on the game…

Oblivion and skyrim. I did a fair amount but the novelty wore off quickly however my wife loves this aspect of it.
Day Z standalone was what killed it for me. Bad game. Bad mechanics. Bad. thats 250 hours of my life gone. although i do know the map of chernarus very well…on foot.

My wife has a horrendous amount of time in skyrim and i’d say 75% of it was her changing things or building houses. if it keeps her quiet and me flying on the laptop im all for it. after all i dont have to do it.
fallout 3 and NV i never did any of it and had a blast. but i think thats why I hated fallout 4. it kind of railroads you into it by armor and weapon upgrades.

I don’t like MMO crafting at all, but a little gem of a game called Subnautica is pretty much all about crafting a home out of a hostile but very pretty environment and I loved that to death.