My reply is no

A few from the Japanese perspective. 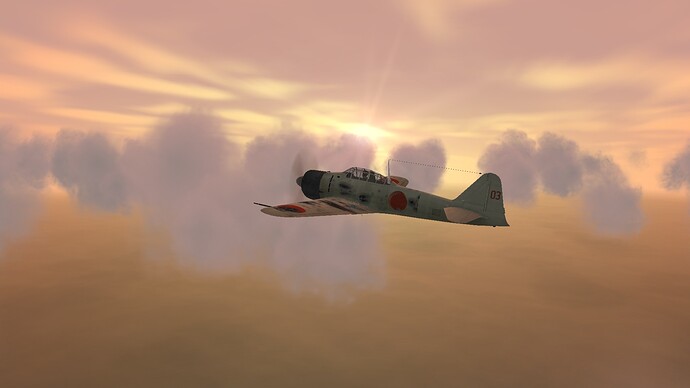 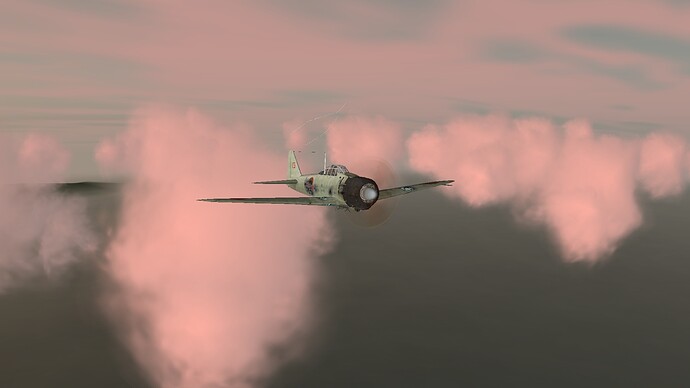 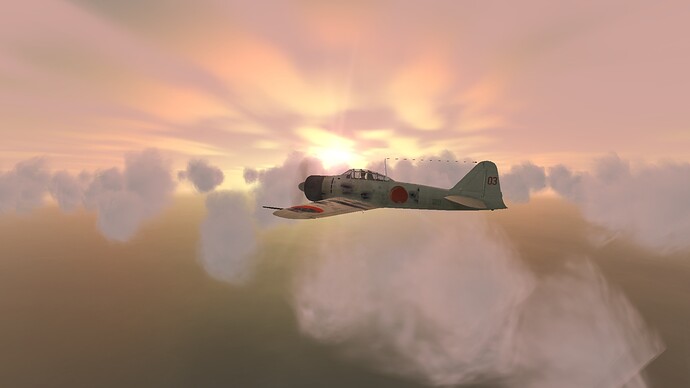 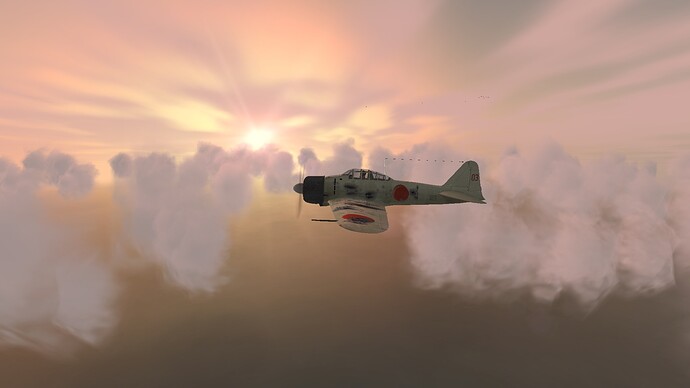 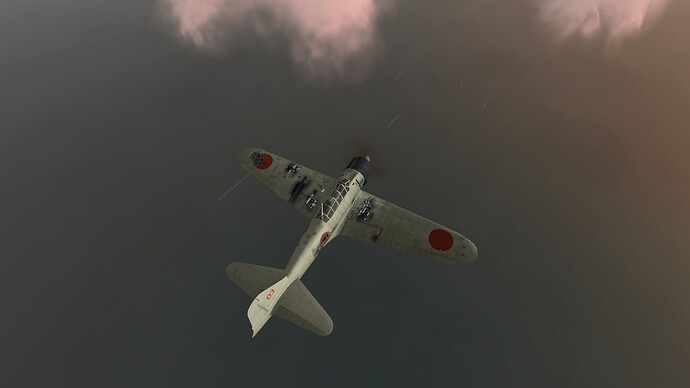 I have very fond memories of going after IJN carriers in the Dauntless, only to have a very long swim RTB due to the aircraft in your screenshot.

Now that I want the screenshot it is going to play hard to get… The one I want to find shows the view of the Dauntless tail gunner, me, looking out the back while inverted just above the water. An A6M had damaged my Dauntless AND killed my pilot before I could jump back into that seat. I had enough altitude to bail but the game never allowed the Player in the Gunner position to bail out of a stricken aircraft.

Here is one from the What if column. F-86 flyby of the Japanese fleet. They did not see each other in combat but it sure was fun flying the F-86 at full throttle through the Japanese fleet at low level. I am fairly certain this screenshot was from a QMB for the Midway map while I was making the templates for the DT patch. 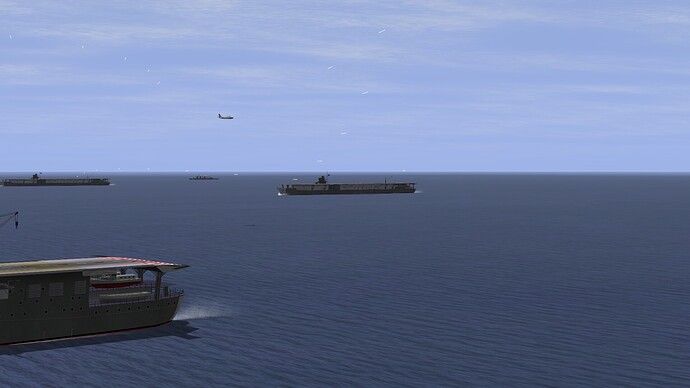 Not bad for one sortie. 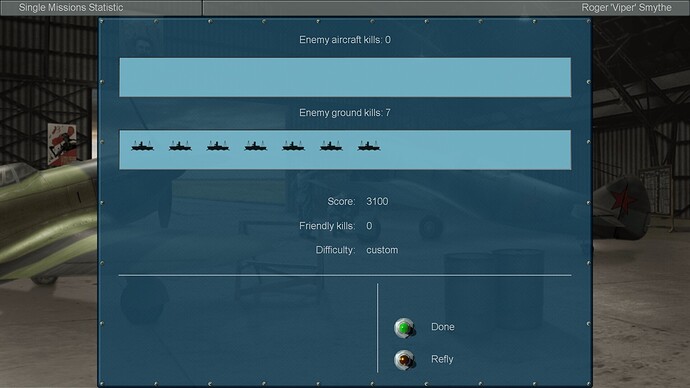 Back when I had time to belong to a squad, we used to have a regular meetings with another squad, which was a spin-off of our original fighter group. They were a bunch of guys who like flying Axis, and we liked being Allied, so it worked well. The original group started in WW2 Online, then moved to a new IL-2 squad not long after it came out. The funny thing is that Jason of 777 fame, was our first CO. Anyway, when Pacific Fighters add-on was released, the two squads naturally continued with their Allied/Axis delegation, and so the Germans became the Japanese. We had like a year of just doing Pacific War ops and it was really fun. Coral Sea, Midway, Solomon Islands, Iwo, and Okinawa scenarios played out every week.

When it began, I was not that familiar with the Pacific air war, more so the ETO, so had a lot to learn, including the campaign’s historical progression and blue water ops. When we got to Midway, I found myself being an SBD pilot hunfing IJN carriers, that were usually capped by Zeros of course. I remember one of the first times that, using the clouds for cover, we were able to make it unscathed to the pitch over point on a carrier, and coming down what Kevin Miller named his latest novel for, The Silver Waterfall, in the middle of a flight of Dauntlesses, all with their red dive brakes out, bombsight full of wooden deck and big red meatball, through a tunnel of flack. Well, it was a thrilling experience especially if you managed to get a hit, even with that mid 2000s graphics technology.

I can only imagine how good it could be in a modern sim in VR.

I imagine it would be terrifying in VR! I’d buy that game in a heartbeat

The funny thing is that Jason of 777 fame, was our first CO.

What gave you that idea? 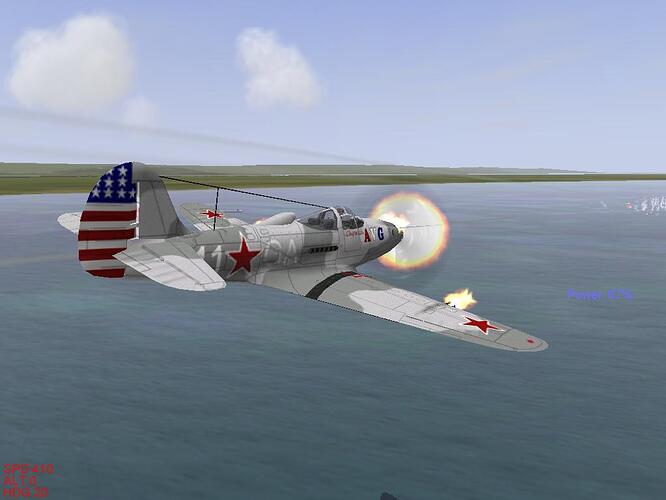 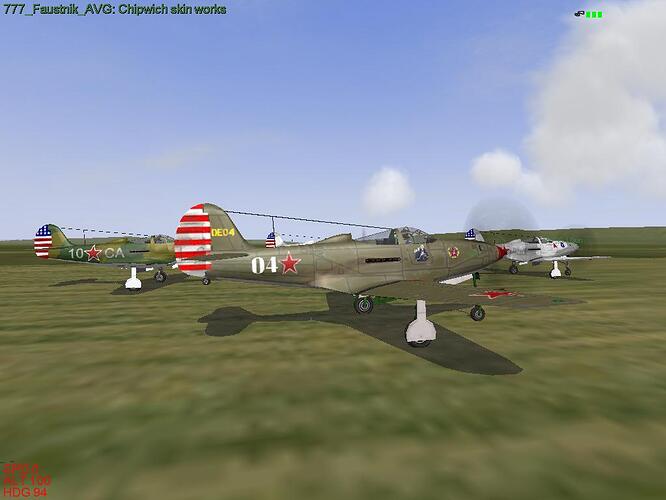 Lazy day flying over Bodney in my Gladiator. 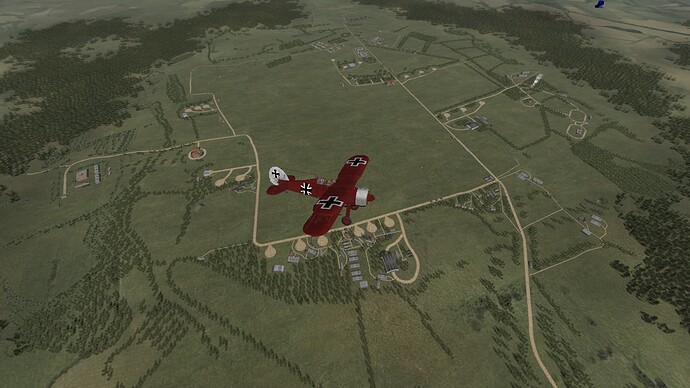 You get a funny screenshot when you use the Taxi to Takeoff option and forget to reset the default spawn distance of 20 meters for an aircraft that has a wingspan larger than 20 meters. 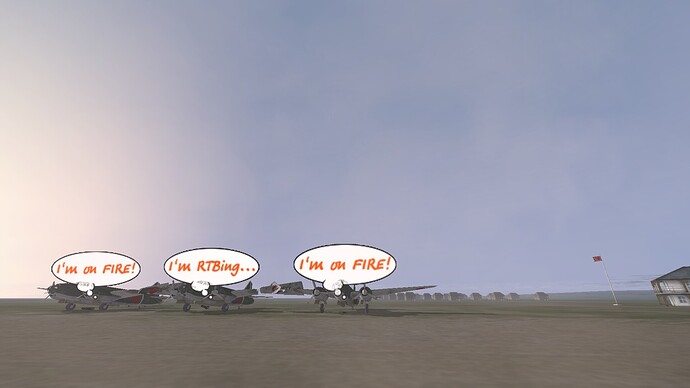 The Japanese AI were particularly vicious during this mission. 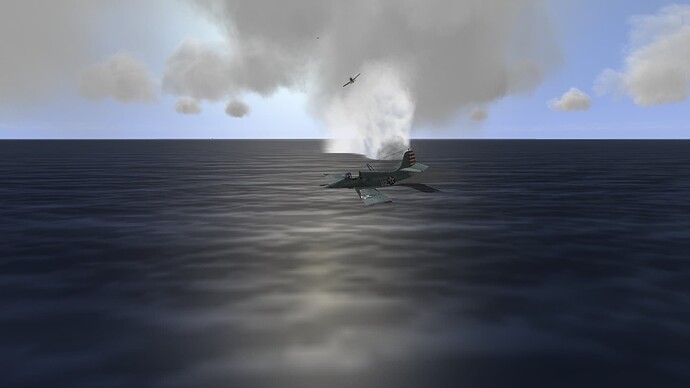 grab77021920×1080 48.3 KB
The Zero doing the strafing was my aircraft on autopilot. It was the first time in all my years of playing the sim that my aircraft strafed a ditched aircraft. I almost missed getting the shot because I was not recording when I first noticed that my plane was going to do it. Lol, I was so shocked that I forgot I could pause the game and have all the time in the world to start a track. Had it taken another 5 seconds for the AI pilot of the Wildcat to despawn it would have looked like my plane was strafing him too.

The look on your face when you are building a mission and you see your in game self go by in a ball of flames. 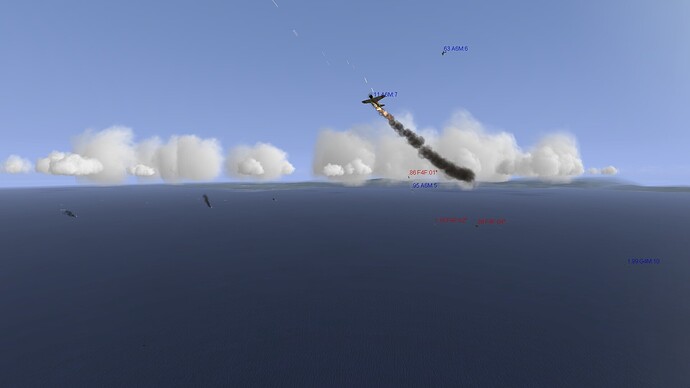 grab77761920×1080 111 KB
That flaming ball of fire is my Player self during that particular mission. I am in autopilot mode watching the action against the ships and the next thing I know I see that Roman candle of myself go shooting across my field of view. Naturally all the enemy AI planes had teed off on me and completely ignored the Torpedo Bomber planes they were assigned to attack and even the other fighters that were attacking them.

Posted in the AI thread also.

Imo the screenshot below is a perfect example of AI frustrations. [grab7776] That flaming ball of fire is my Player self during that particular mission. I am in autopilot mode watching the action against the ships and the next thing I know I see that Roman candle of myself go shooting across my field of view. Naturally all the enemy AI planes had teed off on me and completely ignored the Torpedo Bomber planes they were assigned to attack and even the other fighters that were attacking them. I… 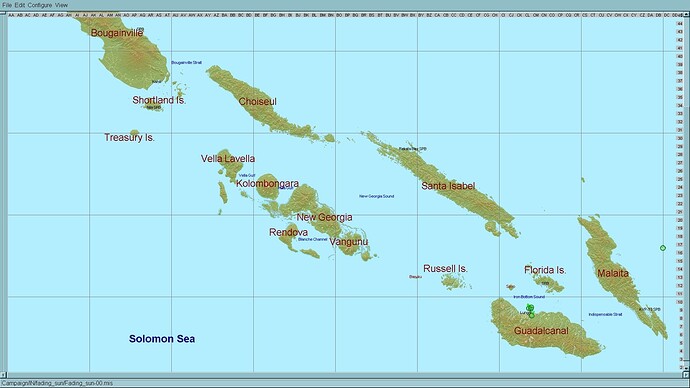 I flew from Kahili airfield on Bouganville to just off Lunga point to score this shot! 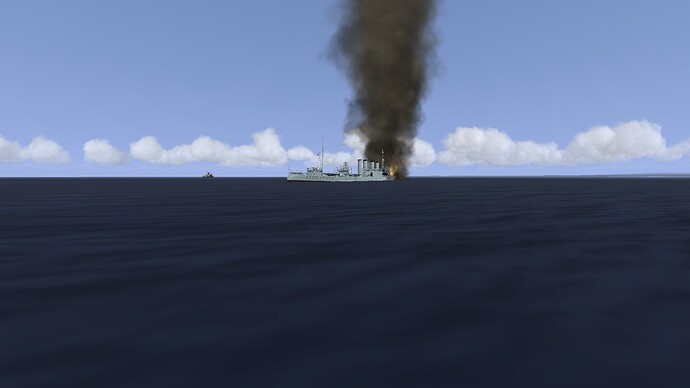 Then came the real chore!! Getting home before the sun set in that blazing fast crate. 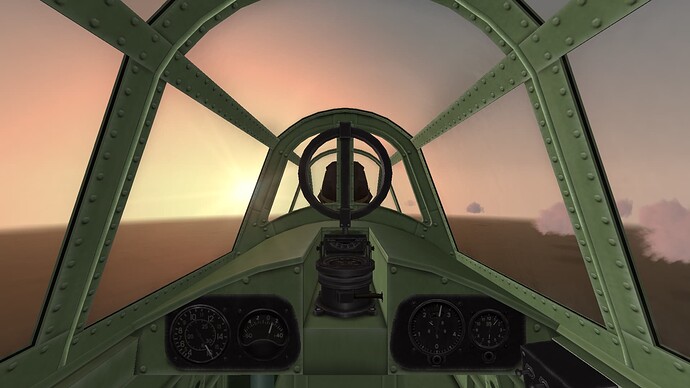 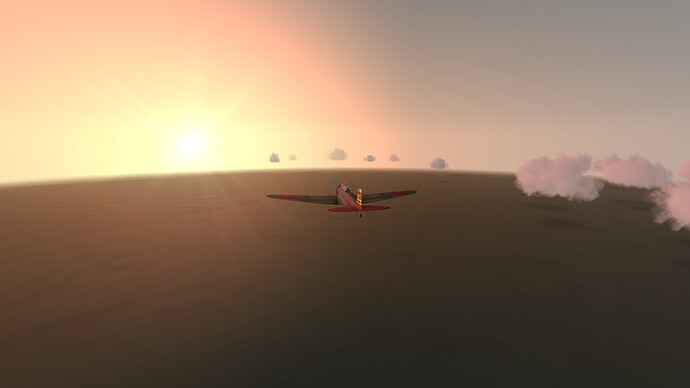 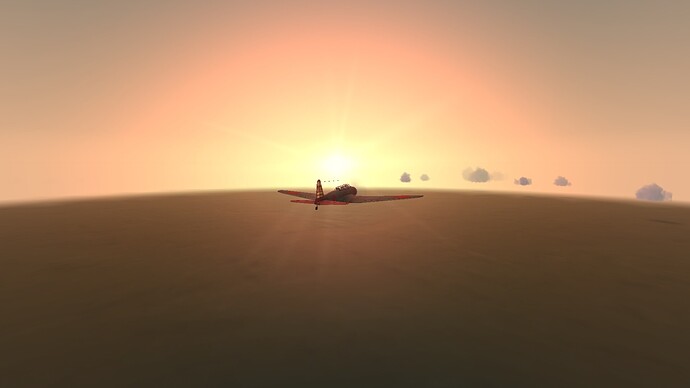 Seeing the mouth of Dragon Island (my name for it) in grid AU 35 let me know that my navigation was on the mark and there was still a chance I might get down before the sun completely disappeared. 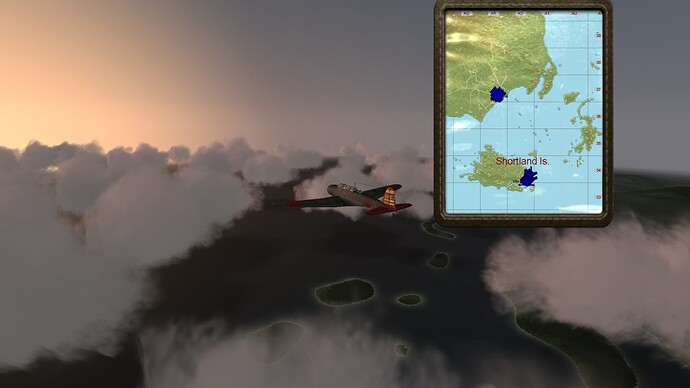 WooHoo runway in sight, I think?? 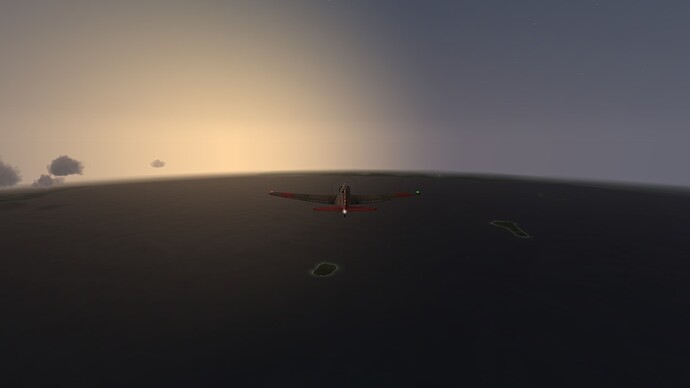 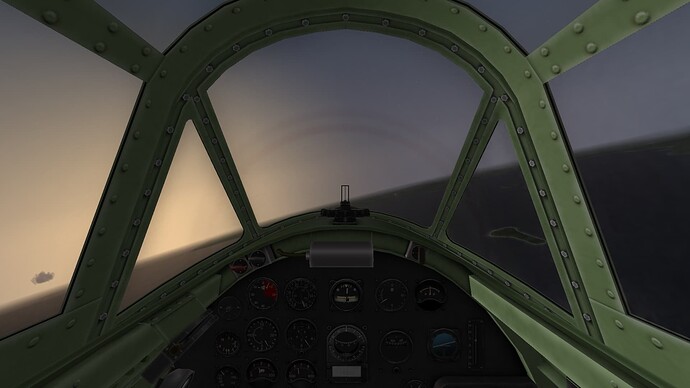 Down safe and sound. 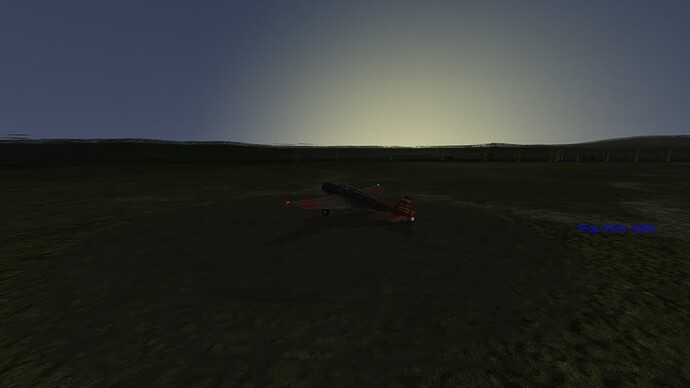 And the final tally for those 4 hours. 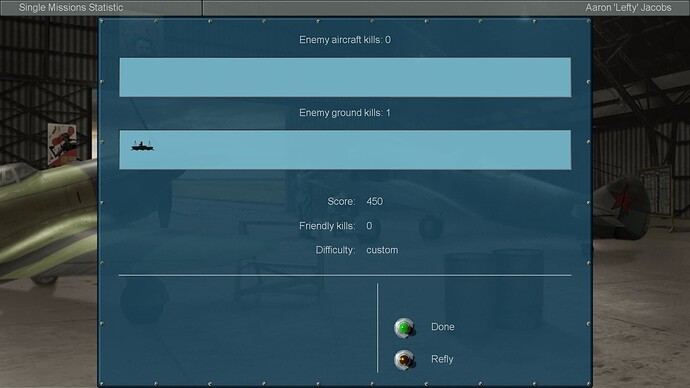 Do you like the AAR of my flight in the B5N2 (Kate) Discobot?

Do you like the AAR of my flight in the B5N2 (Kate) Discobot?

I’m impressed you did that mission without waypoints!

I’m mostly impressed people can have 4 hours of uninterrupted gaming!