IL-2 Cliffs of Dover Really Is Unrecognizable From Release

One of those that is in my library…but I haven’t really gotten around to messing with. You’ll probably find it hard to believe, but I’ll bet I have less than 5 hours of total stick time in the entire IL-2 series! A shameful thing for sure…

Team Fusion has done an amazing job with Cliffs of Dover. It’s too bad that so many folks in the community got so worked against the possibility of the game ever being successful that they probably refuse to even check out the great work TF has done.

Amazing. Looks nothing like the sim I bought 4 years ago.

For me CloD was not that much about a prettier, more FPS-friendly experience as it was about the folks of the community. Nothing beats the sheer excitement when you have 20 guys flying in tight formation, each flight lead communicating with each other. Some people fly like real pros

guys consider to make article about new DesasterSoft campaign released November last year. I dont think there is much awareness in the community about it. 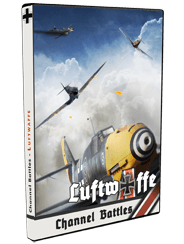 guys consider to make article about new DesasterSoft campaign released November last year. I dont think there is much awareness in the community about it.

How dynamic is the campaign system in Cliffs of Dover?

How dynamic is the campaign system in Cliffs of Dover?

Undynamic, or rather the missions it came with are just linear. Some were kind of glitched as well, so difficult to finish on a bad day.

There was a couple of attempts at a campaign engine I think, plus some commercial ones too, e.g. http://www.desastersoft.com/

Hi guys, I was directed here by Nevo from the Storm of War (“SoW”) Website (www.stormfowar.org)

SoW runs a persistent 24-hour multiplayer/online campaign. The single Player campaign Feature on Cliffs is a bit lame, but the core of the game itself is incredibly complex, which allows (with the right coding) for some pretty damned nice multiplayer elements.

Essentially, we have a persistent online Environment. Each “Mission” runs for 4 hours and the damage done to targets and aircraft is contuniued accross each mission (missions are morning, midday and evening).
We have dynamically generated targets and A.I. bomber raids which are determined based on aircraft avaialbility also.

Players are encouraged to join virtual squadrons. Each squadron is allocated an airfield to operate from, with ist own supply of aircraft which has to be maintained via the central pool.

We have “semi-historical” RADAR (chain home) System in place for the RAF as well as a map-integrated pip-squeak running. We also make use of Team-speak based Groun control Teams to Co-ordinate the RAF defence with the help of web-based Output from the in-game chain home RADAR.

Both sides also have reconnaisance functions. A successful recon flight of a target must be taken before the Server will recosngise that target as a possible option for a raid.

The style of the map (large) and the presence of AI means that it is entirely possible on SoW to fly meaningful missions without getting located by other hman player if that’s what you want - which makes it essentially like playing a single player type campaign. On the other hand, there are enough huamns playewrs online also to provide the PvP element.

We also have a stats system htat tracks players accroding to the pilot life, or career. When you die, or a recaptured, the stats will start a new careeer for your pilot.
We also agglomerate stats for players who are members of virtual squadrons, to show off the recrod of their entire unit.

Anyway, I hope that provides a geenral flavour of what SoW is doing with Cliffs of Dover. At the moment, we haven’t even exploited all of the functions and features that are hidden inside the game. So SoW plans to continue developing the online environment in the direction of high-immersion 24 hour persistency.

Here are some various YoutTube vidoes about SoW:

Anyway, I hope that provides a geenral flavour of what SoW is doing with Cliffs of Dover. At the moment, we haven’t even exploited all of the functions and features that are hidden inside the game. So SoW plans to continue developing the online environment in the direction of high-immersion 24 hour persistency.

@Philstyle - That’s a great summary and I’m watching the videos right now… Really good stuff, and amazing when compared with all the initial reviews and controversy upon release…

Agreed … the release of this title has been well discussed and needs no repeat. It’s unsurprising that the SP campaign was limited.

This is where the il2 CLoD MultiPlayer servers come into action.

There are a number of multiplayer servers now and something for all kinds of player.

There is fun PvP with quick respawns on one side and deeper simulation with realism elements and fewer shortcuts on the other… and everything in between. Something for everyone.

Long predicted as dying [or even written off], this title have plenty of life in it still.

See you in the skies.

CloD is still for me the best online sim experiance by far, noting beat it yet.
This is how it looks in 4K

Finally got my CLOD Steam all updated and its quite a fun now playable sim! I wouldn’t go as far as to call it a BOB simulator but as a 1940’s Dogfight sim its pretty damn awesome and even the offline AI is fun enough to tangle with.

Have you try ATAG server Madaboutsims?

no not yet, I’m more a single player guy these days. But I hear from friends that online can be great fun.

I always was more incline to SP also. I don’t know why but with CloD there was someting i don’t know, something chaotic, messy, but organized and fun in the same time. Be Storm of War or ATAG both worted a try

Back before the mrs and the kids I did have an online life, I was in v242Sqn for il2 days taking part in many 3rd party total war online campaigns and some of my best MP experience is flying in formation with these guys in SBD’s across vast areas of Ocean looking for the target island and the nightmere of trying to get a crippled aircraft back to the carrier and trying to use all my high school maths to work out the rough area where it might be given its speed and how long the mission had been, sweaty palms and total immersion great stuff!

I agreed. I think it is so wonderful that people voluntarily put in so much time to modify a game to this extent. I havent really played it a lot, but it felt crazy realistic, and to be honest I was overwhelmed by the complexity in the engine management in particular. Also the complexity of huge battles (without tags). Really shows how much of a hell had to be for pilots on both sides during the BoB.

PS: The TF team even went so far as to port the game over to dx11 and has fuctional Rift support