IL-2 Sturmovik: Great Battles is a historically based game. It is the next generation of the legendary Sturmovik series of WWII flight-sim games 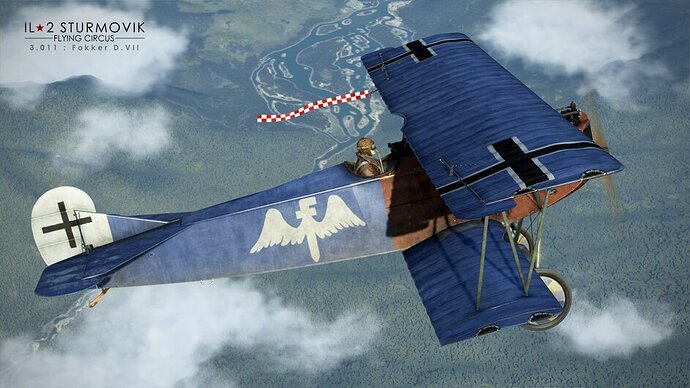 Looks very good but if I’m reading this correctly they still have not yet released a WW1 era map for these aircraft to play on. That is what I’m waiting for personally.

No, the Arras map is not yet ready. Ugra Media, who did the DCS Normandy map, is making the FC Arras sector map for FC.

They posted some shots of it in the last dev blog.

Just flew the D.VII.
Such an awesome kite!

I ate a bunch of those in a Sopwith Dolphin. Either the AI can’t fly for **** or the dolphin outclasses the DVII by a wide margin.

The DVII in ROF spits out Dolphins while still having morning tea. The DVII was mentioned in the treaty of Versailles specifically because it was so good. The Dolphin is only known to big WWI air combat fans because it made such a minor mark on history.

I’m sure it’s just a case of the AI needing tuning for these slower planes.

That could be either the engine DM is too fragile or the AI is too good at aiming for the engine.

Only way to know is have 2 humans dogfight and see how easily the DVII engine goes out. If it seems normal, then the AI is doing the Terminator thing and precisely landing engine hits too often.

Jedi let’s do it. Name a time and place.

Hmmm. That is a good question!

Ah, I’m Eastern time, which is UTC -5 until Saturday night, when it becomes UTC -4.
So we’re 6 hours apart, and I’m talking about Sat afternoon my time, between lunch and dinner, which would be Sat evening/night yours.

The DVII is so good. In VR I really loved it. The Ai is crap. Its only good to familiarize yourself with your airplane. The Dr1 was cool too. I had a really nice feeling about this today. I felt shockingly exposed after flying jets

Yes, Flying Circus in VR is pretty much my flightsim wishes coming true!

Mine too…almost. I wish the simple WWI pits were clickable so that I could fly and fight using the VR controllers. That’s where all this is going; 777 just doesn’t know it yet.

I could not beleive the feeling of being in a WW1 bird. I was completely outside. The bird is so manuverable. Its just amazing.

You are absolutely right!
This sim would be perfect for VR controller flying.
Also, imagine pulling out your sidearm, to shoot at your enemy, using the VR controllers!

Ok, that time should be good for me. My Saturdays can be unpredictable, though, so no guarantees!

It’s pretty straightforward. Go to MP, choose coop/DF, either join a server or create one, pick a mission or several (assuming you have any beyond the default), start it up. It’s the way it should be.

I have many for the WWII birds but as of yet have not found any WWI MP missions. The mission builder is about as opaque as they come so I’ve got zero idea how to make my own.