Talking about the ‘elitists equipment’

As many of you know, we have been working on integrating and making quality-of-life improvements to the entire Saitek range since the acquisition in September 2016. The X56 has had particular attention, with some improvements having been implemented...

X56 HOTAS
As many of you know, we have been working on integrating and making quality-of-life improvements to the entire Saitek range since the acquisition in September 2016. The X56 has had particular attention, with some improvements having been implemented in production to the point where we have already seen a steady reduction in issues. These mostly involved manufacturing processes, such as better control over the damping grease for the throttle to prevent the problem where some people experienced excessive friction in the throttle movement, even when at the lightest setting.

Some issues still persisted, though, and through analysis of forums, online reviews and support tickets we were able to determine that the original X56 can be susceptible to Electrostatic Discharge (ESD). This update to the X56 takes multiple steps to further protect against ESD with the result that it is now in line with Logitech’s standards (and well above standard compliance requirements). This should prevent the axis/button failures that some people have experienced.

There are other improvements, the main points being:

Lastly, we would like to express our appreciation for your patience and support as we have worked through defining and addressing these issues. It is not always a quick or straightforward process to arrive at a clear root cause and solution. We will continue on an ongoing basis to monitor the performance of X56 (and the rest of our product lines) and address any further issues as they appear.

Q. Are all original X56 units compliant with relevant safety standards?
Yes. The original X56 passes all compliance requirements for any territory in which it is sold by Logitech.

The new version is already available through our website in certain regions and will be available from other retailers shortly.

It’s good Logitech is at least carrying on the brand.

The Saitek stuff wasn’t hugely consistent quality-wise (heh) so better QC and manufacturing their end is good news. Mind you, it sort of throws existing owners under the bus a bit, as most of the improvements sort of reinforce why the ‘old’ stuff was not good.

When it is bad it is bad, nothing will change that I guess.

People maybe could read/watch reviews/other people experiences before buying things. At least some of these bad experiences hopefuly taught people to do so.

It is not always easy to be the early adopter

Am I reading things right here, but is it “VR” simply cause you don’t have to take your hands off it?

I guess. Just a bit of buzzwording. VR has people that love it and people that hate it, so plopping it in there will at least get a reaction.

I mean, it is easier with any HOTAS in VR rather than chicken pecking through a nose gap on a keyboard, but it’s not exactly a feature explicit to the X56…

I always felt that the X-56 was marketing towards the Elite-D crowd, thus the focus on VR. If a player doesn’t yet have it but plans to get it in the future, then the “VR Ready” marketing might work. I passed on the x-56 the first time around because it looked stupid. The update looks ok. I am in the market but probably too late to get a read on how well it lives up to “LOGIRich’s” promisses.

marketing towards the Elite-D crowd, thus the focus on VR.

I can’t remember if it was Elite or Star Citizen, but didn’t one of them do a HOTAS that would appear the same as in the game, sort of a special edition or something?

It’s sort of like you see the controls the same in VR as they are in real life, which is sort of ‘inception neat’…

Yeah the pilot in Elite has a saitek X52 set. I prefer seeing my big metal hog in the DCS A-10C cockpit tho

If we think outside the box maybe and with a little corporate synergy maybe we can sound like we’re still on the bleeding edge. If we can get them to buy our core competency is regular controls then we can give a deliverable VR controller without actually impacting our bottom line…

Anyway, that’s what i thought, wanted to make sure they didn’t sneak in any of that keyboard tech they were working on or something like that.

I once sat next to someone that in all seriousness used the term ‘leveraging levers’ in a meeting. I sort of died a bit inside that day.

That Logitech Bridge VR keyboards stuff is funky, so yeah, I think they are on the hype words train… 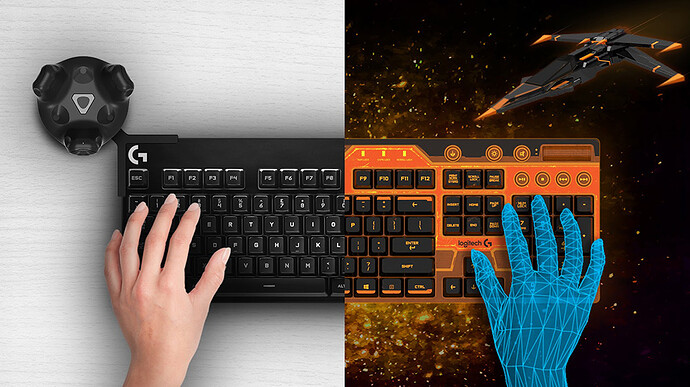 Oh, I know that coast! It’s on Mandelbrot Island.

My Logi G940 is getting long in the tooth, but there doesn’t seem to be any replacement in kind for it.
I got a programmable FFB stick, throttle, and pedals in one set.

Despite severe reservations I made the purchase. After a 2 hour jaunt in X-plane using the twist for a rudder it seems to work nicely. A few little Q^2 issues but nothing worth mentioning yet.

Is there anywhere full specification of the HOTAS? Like what is what, buton, rotary, slider, hat, thumb stick etc.?

If I have time I will write about it after a month or two of use. The logitech website has a function breakdown I believe. All I can say now is that it has a BUNCH of buttons, dials, mini-sticks and POV hats. None of them are really in places I would choose. But I will learn them eventually and make do. My initial complaints are that the throttle is still a little stiff for my taste. Apparently that was a big problem with the previous version. I never touched it so I cannot compare. But I am normally a complainer and this is not a problem for me. So I think they have addressed the issue but maybe fully to everyone’s standards. The thumb dial is smooth in one direction and stiff and a little “crunchy” in the other. With use it seems to be getting better. ALL axes are the most precise of any sticks I have ever used.

Whelp, dusting off this thread. I have a simple Logitech Extreme 3D joystick and it’s serviceable enough, but I want a HOTAS of some sort.

I don’t fly a lot, so I don’t need something expensive and extravagant. I’m taking a look at the X56? Anybody have a recent version of it that can render an opinion?

First be sure it is the new Logitech X56 and not the Saitek X56. Logitech did update it.

@smokinhole definitely has one ( covered in dust I guess). Plus @Mace recently got one.

I have older X55 and it works quite well. Sensitive stick sensor with very good resolution and no dead-zone.
Enough buttons and switches.

I really like it. I had the X55 years ago and is pretty much the same except they added a mouse stick to the thumb position on the stick and changed the graphics and fixed issues that plagued some.

The throttle is great, a little stiff but eases of each time you use it, and has lots of buttons and rotaries and even a 3 mode selector if you want to programme different modes to switch between. The stick is sensitive and has a little wobble at the centre but adding some deadzone sorts this, it’s accurate in it’s movement and again lots of buttons.

I can recommend it.

Best joystick setup I’ve ever owned. No significant issues after 2 years of hard use.

I will never do this

Same here. I also don’t do curves. All they do is multiply the suffering to a different area of the stick’s throw. There is a exception; and this is also where the X-56 shines. IL2 Flying Circus lacks Rise of Flight’s excellent joystick properties that are set up plane-by-plan, if the player so wishes. So when flying a plane without trim like the Camel for instance, you have to hold constant forward pressure. The X-56 lets you set up an asymmetrical curve almost on the fly so that you can relax your hand. The real men flying those machines had no such luxury.