I am beyond the planning phase and have started buying parts for my all-AMD Future PC. Birthday present to myself! 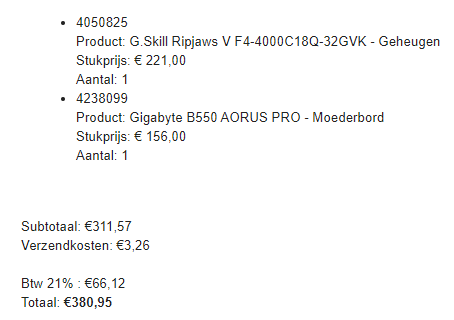 I found it hard not to get an X570 MoBo, but couldn’t justify the expense (and risk of a tiny noisy fan) for just the extra PCI-E 4.0 lane that I probably wouldn’t use.
I found this RAM set, which is by far the cheapest DDR4 you can get in the Netherlands, and figured I’d buy the MoBo and RAM before everybody and their dog start building Ryzen 5000 systems.

I am going to be replacing a reference MSI GTX 980Ti, and the i5-4690K + Z97-K Mobo + 16GB of DDR3 Corsair Vengeance RAM.
The GPU will probably go to family, and I hope I can sell the CPU+MoBo+RAM as parts, otherwise I’ll just get a cheap PSU and sell it as a full PC with the case and one of the SSDs, then I’ll have an excuse to get a new 1TB NVMe SSD. But I’d rather keep the case, as I broke a tiny part of it, causing the fan-filter to misalign slightly. I don’t care, but it looks bad to a buyer.

I know the general advice is to wait for reviews, and I’ve never been one to get the newest just released parts, but I’m taking some weeks of leave from work soon, and I like AMD as a company much better, so even if the GPUs turn out to be slightly less than Nvidia performance, I’d still prefer my first expensive new-bought GPU to be from them. (Up until now I’ve never paid more than 250 euros for a GPU).

I expect that there will be supply problems and delays on the RX 6800 orders as well, but I do hope that I can get one before I take my holidays.

EDIT:
The final build ended up slightly differently: I ended up passing one my 250GB SATA SSD’s along to my brother, with the Seasonic PSU, MoBo+CPU+RAM and Corsair 450D case. The other one went to my girlfriend’s new build, which is not yet finished due to some setbacks. (That deserves its own thread though)
I got a GTX 1080Ti Xtreme Edition because of limited availability of RX6800 cards and rationality kicking in about buying parts before reviews are out.

Furthermore, I was apparently so fed up with the noisy GTX 980 Ti reference card I have been using for the past years, that I splurged on an all-Noctua cooled build. 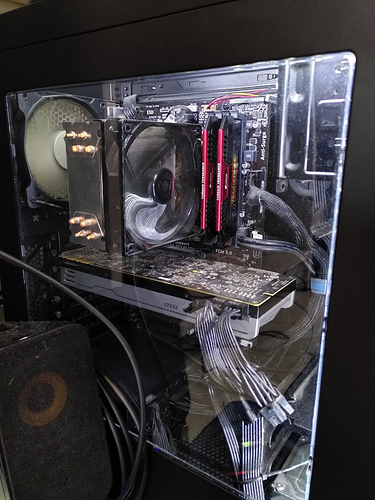 The SSDs are behind the motherboard in this case.
I installed a white LED strip myself, none of the parts have coloured LEDs! A requirement I have already had to give up on when getting the new MoBo. 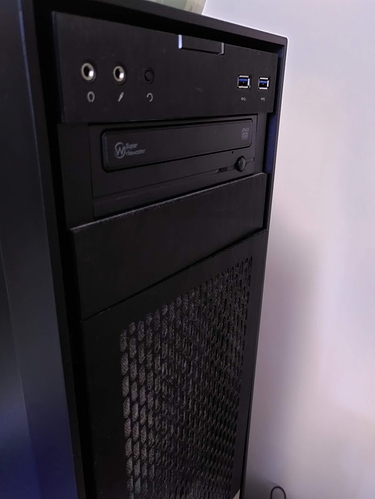 And this is the ugly crack. Lesson learned from last build (5.5 years ago now): do not apply even remotely similar force to the case parts as you do to the RAM sticks and the MoBo power plug.

big doubts on ram…
heard rumors of 4000hz support for ryzen 5000series but not sure. then don’t know if to buy xmp or try overckloging it (not much experience here)
size 90% 32gb.
i’m tempted for 64 but fast kits get super expensive!

Nice! Yes, the fan is on all X570 units, seems unavoidable with the higher power usage of X570 chipset (15W). But hey, you do have an additional PCI-E 4.0 lane. I guess that means you could use an additional NVMe drive, while I would need to sacrifice some SATA connections to use a second M.2 drive.

Yes, RAM amount is always a gamble, especially for us DCS players.

The RAM set I bought is significantly cheaper (220 vs 300) than 2x16GB sticks here. Of course, not as upgradeable, but that’s a risk I’m willing to take for 80 euros less. I’m also not planning on using a huge CPU cooler (just a simple Hyper 212 Evo), otherwise that would be another good reason to not want 4 RAM sticks

You can‘t hear the fan. It‘s not one of those small agressive ones that used to be on older hardware. Not a reason to skip a x570 and all the future goodies it will bring.

Makes sense, about the fan. What future goodies are you speaking of? The ones that use PCI-E 4.0? Or is there something else I am missing (such as more CPU compatibility)?

I know, but it’s supposed to also work with B550. Otherwise I wouldn’t have ordered the B550. Please do continue talking though, as I can still cancel the order

I just checked again, and this is what it says on the official AMD site: 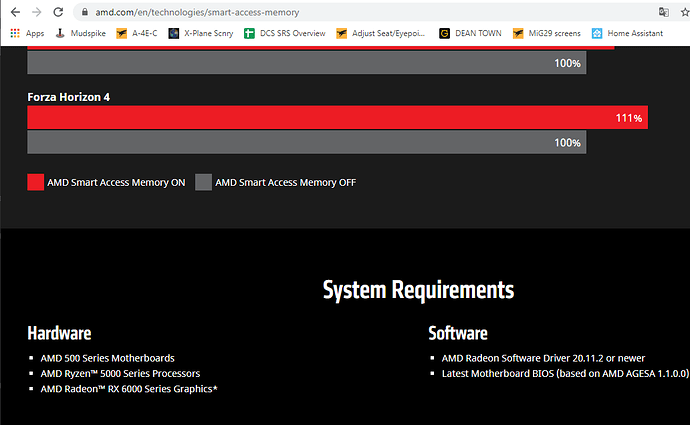 According to some articles, B550 was explicitly mentioned but I can’t find official sources now

Ah nice. Sorry I had bad information from some news site I usually do not read.

I noticed there is some contradictory info about this on the web, no need to apologize, glad I double checked now!

Trying to POST, I messed up the BIOS flashing (FAT instead FAT32 formatting on the USB drive). Got DRAM and VGA leds.
Had to remove the (on old BIOS still unsupported) CPU to be able to flash the BIOS again. I also removed all 4 RAM sticks.
Then after that, I put the CPU back (which was a mess because of insane amounts of thermal paste on the standard cooler) and put a single RAM stick in the wrong socket.

After I fixed that, I am still not getting to the BIOS screen and seeing the VGA led come up, even though my GTX 980 Ti and all the power cables are connected.

Going to try to reset CMOS then remove and insert the battery in the MoBo tomorrow. Wish me luck!

On the upgrade trail too with AMD in mind this time, done some fair research as well.

Board is an MSI Tomahawk X570, bought this a month or so ago and got so anxious it might be DoA ordered a second hand AMD AM4 2600 CPU from Ebay just to plug in and test, its working fine, this will get sold on once my new AMD CPU arrives though.

Ordered a 5950X yesterday morning and I’ve to wait … ah well, there were a lot more 5600X’s available I guess, its a fantastic looking CPU.

Got the ram, 2 x 32 GB kits for total of 64 GB, over the top I know, but its good ram, 3600 MHz and good for 3800 MHz overclocking, contrary to popular belief and what I initially read too, these new AMD boards and CPU’s are not that fussy, do choose well though, my ram has good tight timings, pretty sure i chose well here, testing it in my Intel board just now and its rock solid at all stressing.

Brought a new cooler too, but pretty much every thing else I can re-use, its still not that old, PSU is a Super Flower 1000 Watt, its the new GPU I’m looking at now.

Freak … just reading some stuff you are posting again here.

I may have this wrong, so please fact check me on this please anyone if so, wont be offended if I’m wrong.

Went for X570 here as its more up to date for the new CPU, dont mind fans at all.

I’m new to AMD as well after well over a decade of using Intel only, still learning the new ropes too.

Yes I got the specific BIOS version that is meant for Ryzen 5000, thanks for thinking along though!

Best of luck with the 5950x wait. Will be a beast when you get it though, I read it set a number of world records: 6.35 GHz among other things (on LN2 of course, but still)

So I promised to keep you POSTed

No luck, even after a CMOS reset and trying the other PCI-E slot. Still no display, still the red VGA LED.

Called the store where I bought the parts just now (azerty), and the guy I talked to was impressed at all of the troubleshooting I did. Told me to ship them the assembled MoBo + CPU + stock cooler so they can test which part is broken and/or fix the BIOS if that’s the issue.

I’m expecting this will be part of standard warranty and hoping to get a replacement before the new AMD GPU’s launch. But if I’m really unlucky some of the thermal paste may have broken the cpu and it’ll be my fault.

Still, at this point I’m just glad it’s out of my hands and I can stop worrying.

How did you get on with this Freak? hope you got a positive result, have had defective parts before and thats never good news.

With all the tech launches and the high demand situation, the store’s tech support is slower than normal. Can’t really blame them, and they warned me beforehand.

Last week they told me they ordered a replacement motherboard, which arrived at the end of the week. They think they will wrap it up this coming week, which would be just in time for my vacation in the first week of december.

But I’m not in too much of a hurry, since I already upgraded my GPU from an old and very noisy GTX 980 Ti reference model (blower fan) to a slightly less old, buut much less noisy Gigabyte GTX 1080 Ti Aorus Xtreme Edition. It was offered second hand literally 2 blocks from me.

Ideally I wanted a new AMD card, but chances of getting one before my vacation were getting slimmer, so now I have a card that is much better already. The middle of the 3 fans spins in the other direction than the others, for minimal turbulence where the blades overlap, and it has a ton of copper. It really works well. I think I’ll keep it until after I’ve seen tests of the RX 6800XT in DCS VR.

90 fps in DCS in low intensity situations or low settings, 45 fps easily with SHADOWS ON in VR. And it’s so quiet! I am very much enjoying myself with this new GPU.

It’s mostly my girlfriend who is getting impatient, because once my motherboard and CPU are back, I have all the parts and will pass my old pc to my brother, and his parts will pass to her with which she will build her first desktop pc to replace a very old laptop (GT750M). Then she will finally be able to enjoy her 27" 1440p FreeSync screen in full glory. We already got her the GPU for it: an RX580, which has been tested in my system as well. So now my pc has had 3 different GPUs in the span of a week. I’ve run a lot of Display Driver Uninstaller.

Good news finally!
I received the MoBo CPU combo back last night, apparently they replaced the motherboard.
Mounted the RAM, M.2 SSD and Noctua cooler and I got into the BIOS!

Weirdly I had to mount the CPU cooler on the AM2/3 spacers, as the AM4 ones were too low.

Today I will assemble the rest, install Windows and move my stuff over