I absolutely loved the first Doorkicker game… police themed. Of course my character was in it…so I might be blinded. The second one is out today on Steam, via early access. 20 bucks. More soldier themed this time. SP or up to 4 player co-op.

(screens are too big even thou reporting at 0 kb/s. error?)

(screens are too big even thou reporting at 0 kb/s. error?)

Hi @Magnum50. Uploads are off till about tomorrow, as we’re currently doing a server update and moving stuff around, but I left it open to at least post topics.

EDIT: Image uploads disabled, please don’t try. Migrating files but can keep forum running till ready tomorrow. The forum site will be down today (3rd Nov) for some hardware changes. It’ll be mainly read-only or off while we move the stuff around. It is likely to back on the 4th or a 4th. Apologies for short notice, but November 3rd is a good day for it, as I’m sure you’re all aware, it’s Micronesia’s Independence Day, so most people will be celebrating that. Cheers.

What are you talking about? Not sure if your serious or joking here.

NO… this is a small development team that use to be members and friends of SimHQ. They came out with Doorkickers years ago and it was awesome, winning a lot of awards. This is there new game.

I think he may of meant early access @Magnum50. I had to check as well

Ahh ya… makes sense, I didn’t notice the connection. On me.

EA - Early Access.
ofc this one is a big more trusted by their other previous successful release, but I’m already full of so many EA games.
The eternal “beta”…

By the way, if someone like the genre, i also recommend the Police Stories and if want to coop with me, catch me on steam (nick stavka5)

Man…how did I not know that? That is really cool…kudos to them for such a great success!

Yep… I remember when Dan first mentioned it on the SimHQ forums, just a idea at the time. I didn’t say it out loud but I was like “no one wants to play a cop in a video game unless it’s a FPS like SWAT.”… He gave me a very early first run, I loved it, gave him some tactical advise, which he implemented and it skyrocketed in sales earning a bunch of awards.

I’m still pissed he never put in dogs like I demanded. And I still remind him to the day. lol

Anyway 20 bucks… if you like the idea, support them if not. OK.

I actually see on my iPad that I own that version of it (the first version)…but it sits there next the Arma Tactics and Faster Than Light icons wishing for a day to be played. Haha…maybe if we buy a Gulfstream I’ll finally have enroute time.

this is a small development team that use to be members and friends of SimHQ. They came out with Doorkickers years ago and it was awesome, winning a lot of awards.

Yep, kind of the same as @Magnum50, I saw a thread sent a few PM’s regarding RL tactics and one thing led to another. I actually like where they are headed with this one even better, don’t get me wrong DK1 is a great game, but it’s not particularly authentic to it’s subject matter. The nature and flow of the gameplay make much more sense in a military context then the civilian western SWAT operations. Definitely going to have to pick this one up and try it out.

Loved the first game. Thanks for bringing this up on my radar, would’ve otherwise missed it.

Haven’t broadcast gameplay in a very long time… pretty much lost all my followers and desire when I left SimHQ, lol… but anyway…

Tonight, 2/25 at 2030 Eastern I will be broadcasting Doorkickers 2 SP Basics on Twitch (gotyoursixgaming). Tomorrow, 1300 Eastern co-op with a friend. Teamwork and Tactics. Watch live or later if interested. Twitch
Still in early access but coming along great. 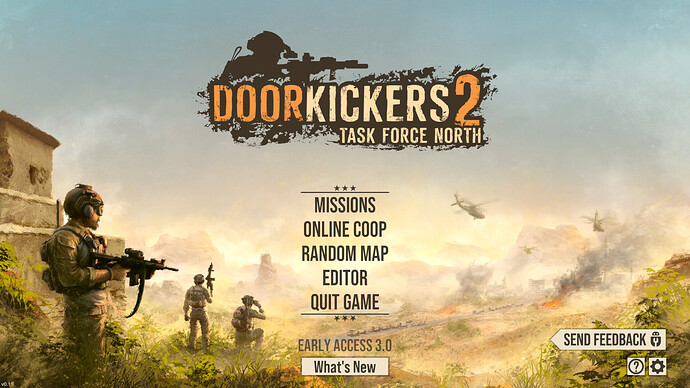 The first one was a great iPad game for layovers, can’t wait to check out the new one! Thanks for letting me know.

Ha…that sniper laser thing is pretty cool… An interesting game mechanic for sure!

Doorkickers 2 The Basics… Just a 30 min broadcast I did showing the basics of the game for those interested or those who are new to the series. This is still a early access game, a work in progress but still as awesome as the first.

That was not the style of gameplay I was expecting at all. That looks great!! I was expecting a sort of cheap rainbow 6 knockoff in 1st person.
I’m glad I watched your video @Magnum50 I’m going to grab this ASAP.

DK2 looks really good! It might be cool I think also in 3D (not FPS style 3D).
I really liked Jagged Alliance 2 back then. Never played the 3D sequel though. Played a bit of Alfa Antiterror (demo or something, it was released in 2005). And it was in 3D and quite good iirc.

My lord I spent some time getting my butt handed to me in that game. I never finished it but sunk some serious time into it and had a blast. I’ve got it on GOG but I haven’t gone back to it.