It would also show its mettle in the hands of the Finnish Air Force.

Yes! I’d need to refresh my memory as it has been a decade or more since I read a few of the books by Keskinen (I think) about the Finnish Air Force in WW2 but the Fokkers definitely played their part and played it well. Fitted with skis, the Fokkers operated from frozen lake beds with camouflaged hangars. Finland is known as the land of thousands of lakes so this was a very effective way to hide.

So cool! That instrument panel is in dutch too! Love that little fokker

Did you also find the G-1? That’s a great bit of Dutch history too. Might be slightly out of timeframe for this perhaps.

That gunsight looks like it’s combined with a radio antenna.

The trek across the Outback continues… I decided to route via Longreach, which is a little over half way and has a NDB and an airport. I figured I could stop there if I felt like it, but I decided to continue to Charleville.

Coming up on Winton, using my razor sharp IFR (I Follow Roads) skills.

A prominent river system, so far so good.

Eventually the Longreach NDB comes in. I follow that to the town of Longreach. Deciding not to stop, I turned onto a 143° heading and push on towards Charleville.

Leaving Longreach behind us…

Some time later, I pass over a dry lake bed. There is a larger one off to my right…

There is nothing on the SkyVector chart, but Google Earth shows two dry lakes close to the planned course.

Shortly after passing the dry lake bed, the Charleville NDB came in…

Shut down at Charleville. Melborne is getting closer!

Albury is a little out of the way, but it played an important role in the Uiver story. At 1:20am on the 24th October 1934, Uiver landed at the Albury racecourse, with the help of the town’s inhabitants. The aircraft got stuck in the mud, and had to be pulled out next morning. Amazingly, they were able to continue on the Melborne. More details on the story here.

The weather started to turn as I got closer to Albury. I dialed in the NDB at Corowa as Albury doesn’t have one. I started my descent when Corowa was on a bearing of 220°. When I broke out below the layer, Albury was below me.

I passed right over the end of the runway, still in broken cloud. I descended a bit further and then made an impromptu left circuit onto final.

Just one more leg to go!

For the last time on this trip, we go forth into the wide blue yonder…although it’s somewhat cloudy and grey.

Goodbye Albury, and thaks for all your help!

The cloud layer thickened up. I was hoping for a nice, easy and picturesque final leg, but it was not to be. I climbed up to 10000 to try and get above the cloud, but I didn’t break out on top.

My plan was to overfly the NDB at Mansfield, but I guess it was broken (aka missing from the X-Plane nav database)… I was able to determine when I was past the missing NDB by tuning in to the Sheparton beacon and taking a bearing off that. I then made my planned turn towards Melborne and looked for another NDB on the map.

I managed to pick up the Melbourne-Moorabin NDB, and so proceeded in that direction. Looking at the chart, the NDB is situated at an airport on the coast, just South of Melbourne. My plan was to fly over the NDB and descend in a holding pattern anchored at the beacon. It worked like a charm and then I headed North towards the city…

Although we are going to be landing at the Melbourne International Airport for our trek, the real race ended at the Flemington Racecourse. The default X-Plane scenery just shows an area of mostly empty scub where the racecourse is located, but I flew right over it as it seemed like the appropriate thing to do…

From the racecourse, it is a very short distance to Essondon Fields airport, and beyond that, the large International Airport comes into view…

I started my landing preparations,

On second thoughts, I think it’s time for a flyby…

It had to be done!

After the fun and games, time to land for the final time…

Shut down next to some old hangars…where’s the beer?

Thanks Chris… that was a long trek! Now I’m hoping the rest of you make it. I can’t guarantee that there will be any beer left if I am stuck down here alone for any length of time

@PaulRix A winner is you! 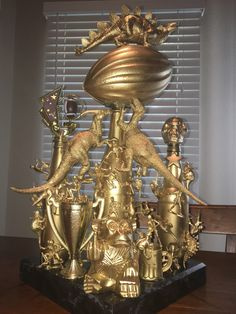 It was an interesting journey, and the second long trek I have completed exclusively in the VSkyLabs DC3/C47. I think I got my money’s worth with that aircraft!

I woke up to the thump of mortars I think it was.

That was 1:48 of flying. I was just about at Bhopal. Would it be a terrible concession to ask for if I was given credit for making Bhopal?

Oh yes, I would allow this. CTD’s are frustrating enough

I just love that Gee Bee!

Going to try to churn through some reports. Sorry if these seem fast and loose

Internet failure removed my ability to create a map via FSFlyingSchool/Google.

Weather was clear for this leg. Straight forward flight plan as well, down along the coast an in to VYYY. Nothing diverting expected on the flight.

Other Media and Notes:

This was a pretty straight forward leg. MO0re haze at the starting airfield and X-Plane traffic was … confused, I guess.

Looking good and clear once I vacated the airspace over the field. Must be the fumes from all of those stuck aircraft

Visual landmarks appeared as expected. I did lose my internet connection at (or around) this point, so the weather stayed clear the rest of the way.

Unexpected, though, was the white spec off my right side. Obviously had the strobe/nav lights of another aircraft but this is the first one that I have ran into in the air.

At the destination airport and it was good to see it was alive. Made tuning in to the tower and ground frequencies more important to make note of what was happening and work around it. 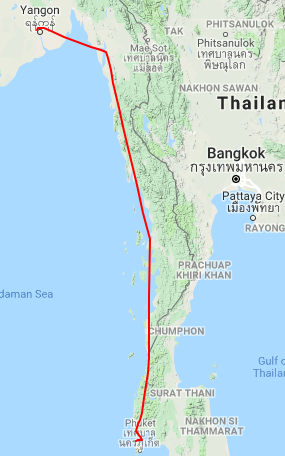 Relatively clear weather down the coast but approaching the … checks notes … Phuket Airport and I will run into some decent cloud coverage. Plan is to stay near the coast so that I can descend without worry and go blow the clod cover if I need to. NDBs almost all the way with some quiet spots but no real navigation challenges, other than getting to the target airfield: Phucket, where no one wanted to install an NDB… If cloud cover gets too crazy, I plan to divert east to VTSG which does have NDB coverage.

The craziness at the bottom is the plan to monitor the KB NDB, after passing the RN NDB, in case I have to divert.

Other Media and Notes:

Weather started off in the usual haze. Not sure if it is ActiveSky or Ultimate Weather. X-Plane Ai flights are getting bottled up due to a ‘heavy’ that can’t get it’s flight plan loaded into the computers. Amateurs

Haze is annoying but the scenery below looked nice.

Shortly after it cleared and the visible landmarks were easy to spot.

I am getting some issues with draw distance that I think is related to UltraWeather cloud shadows.

Ran into some more AI traffic. Here, off the right bow of the dash, tiny red light in the water. I was able to keep an eye on it as it passed below my nose inbound for a nearby airfield.

At this point, because of the weather, I am going to use the timer on the yoke. My next leg, at 120 knots, should take an hour. I am going faster than that so after 50 minutes I will have to make a decision to divert east it I want to catch the NDB.

But I am able to see the coast pretty well through the cloud breaks and I can spot that crazy lake pretty clearly.

Sometimes it was too covered by cloud …

But spotting the coast was fairly reliable and I was able to find good features to accurately understand where I was. Soon enough I was heading out toward the beach to begin my descent into Phuket.

I crossed back to come in on the active runway, as reported by ATIS.

Off my left I picked up a shadow … well a Nav/Strobe light of another aircraft descending along with me into VTSP (can’t keep saying Phuket here). I am going to have to keep an eye on them as they are talking to the tower on an IFR flight plan and I am winging it VFR. They are the red dot on the horizon off my wingtip.

All lined up and I hear the tower give them permission to land. They are somewhere behind me so I will have to be quick about it. And of course, someone flicks the haze switch and we are in the soup again

But again, pretty good airport scenery. I am able to choose my airports well via Little Navmap as, zooming in, if I can see parking spots, then I am fairly confident that there is some effort put into that airfield. Phuket. If you forgot

Always when I start XPlane I hope for easy flight in regards to weather, navigation and reporting. Once in a while I have a luck.

Such flight was from Rangoon to Bangkok. But right the next flight was perfect opposite

Ready to stay over night in Bangkok

And what happened next day ? Finaly I got lost on my way from Bangkok to Alor Star

Everything went fine. There was crosswind from the right and I compensated for it. Hit my refueling port VTSF Nakhon Si Thammarat without issues. But the next leg I totaly forgot about the right crosswind and went just straight for my next stop.

So I thought I crossed Thailand from North coast to South coast but in fact ended up in Malaysia. Wasnt able to fix myself at that point as I was looking too much North in the map

Finaly I found some bay and decided to positively identify my position as I was already short on fuel. Followed the bay inland just to realize that it is river. Quickly fixing my position I decided to go for the closest airport on Pangkor island. Approaching the island from South the airport was hidden behind hill tops. What a relief it was to found out that the airport is part of the XP scenery

And lets try to not kill my self now

Down in one piece