I have just ordered the parts for this.

I changed my mind about stuff looking like this. See later reply.

From my current setup I will use:
GTX 1070 8GB
GTX 970 4GB (Keeping that in my old system)
HDD docking station
Cardreader
The external hardware.

64GB ram is because I do video editing, 3D modeling and are beginning to dip my toes in 3D animation.

I am going from 32GB and a FX8350, mostly because the I5 7500 offers hardware support for my chosen video editor. CUDA support was lost when Nvidia deprecated NCUVID.

I was considering going separate Win 8.1 and Win 10 machines, but with all of my external hardware it would be another 400 to 600 US$ for switch boxes.
So I will continue with a dualboot system and save that dough for later upgrades.

And further on, a better graphics card and a VR headset.

Now to settle in and wait.

I only use mine for gaming and occasional surfing, so that’s where I focus my investments. Video stuff is a whole different slant.

I almost have enough parts left over for a 2nd PC myself, I’d just need a case and PSU I think, I have a spare 16GB, DVD ROM, non-SSD drives, my old GTX 1070…but I don’t have the room on my desk and I’d also need switching hardware. Besides, everyone else in my house has a laptop and i dont need a server or anything.

I used to have a 2nd PC a decade ago, but it was ignored and i had more luck selling my old parts. Haven’t been able to do that in years now, though.

I was intending to do backups and transfer both Win 8.1 and Win 10 to the new system, but that is going to take a Sxxtload of hours. So I am going to keep Win 8.1 on my old system and move the 8.1 stuff to 1 4TB drive and the Win 10 stuff to the other and put that one into the new system.

That will mainly stuff like DCS, P3D, Steam and so forth.

I have ordered this stuff to accommodate my external hardware:

Kabel is cable, aktiv is active, 2 vejs is 2 way, forlænger is extension, netværk is network, intern is internal, kort is card, hun is female and han is male.

This should let me shift the input for my center 32" Panasonic TV and 2 26" Medion screen’s and other hardware.

Ohh yeah! Old PC hardware. I used to have lots of that, but now I have thrown it all out.

If I had not been stupid and give away my full up SoundBlaster AWE 32 with signal processor and extra ram, I would have still have had my DOS 6.22/Win 98 combo PC.

The AWE drivers messed up Win 98 when I upgraded from Win 95 and at the time I was not connected to the internet and was not aware of the possibility to download new drivers.
I have really regreted giving it away.

The one thing that DosBox is missing is to me full AWE 32 with signal processor and extra ram support. TIE Fighter is just not the same without that sound.

Well. A lot of mainboards support at least 2 graphics cards and have been doing for quite a while.

My new mainboard is like this and my old one have the same capacities with 2 PCIe 2.0 slots.

But both only supports 4 displays at the same time.

Currently I am running the 32" Panasonic TV + 2x 26" Medion on the GTX 1070 and the 2x 8" Eyoyo on the GTX 970. I am just running the standard Nvidia drivers and have set up windows to use multiple monitors. Since Windows really messes up icon placements when changing resolutions and it is a hasle to change screen placement I use Actual Window Manager for that. I think that the 50 bucks is well worth it. It is also taking care of the one 8" that are upside down.

My tripple/2 with center as primary and setup 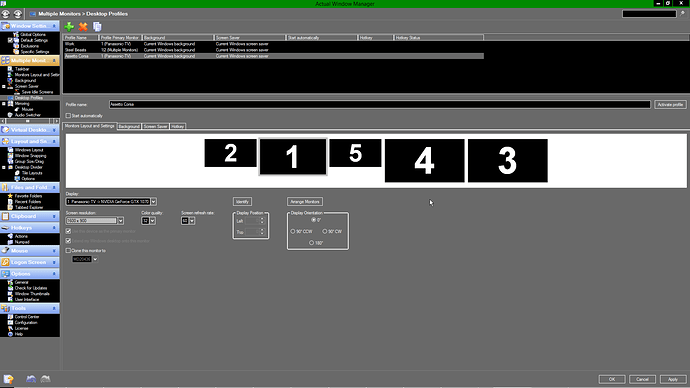 My tripple/2 with left as primary setup

3 and 4 are the 8" screens and i will use them for telemetry and MFD displays and in the case of Asetto Corsa 3 as all of the onscreen controls and apps are turned on and off on a scrollbar on the right edge of the screen. I am still playing around with this, so the resolutions are not yet set.

The GTX 970 will stay in the old one running the tripples.

As for the CPU at this time, I have already spent more than planned so it will have to wait.
I will probably wait until I have decided upon a VR system and based on that chose if it is going to be a I7 7700 or a I7 7700K. I don’t really intend to do any overclocking, at least I have kept away from it until now. Gues that I think that it will last longer without overclocking.

When I was doing my research my specific needs for inbuilt GPU in the CPU and support for 64GB ram raised the pricetag with something like 220 to 300 $ for an 8 or 9 gen system.

I am also not one for being at the cutting edge of technology. A fair number of years as unemployed or on low income, has taught me that I can wait until the price drops.

With this I will get hardware rendering for my videos and maybe get FSXSE to run again. It has not done that since I added the GTX1070 to my system.

I am also not one for being at the cutting edge of technology. A fair number of years as unemployed or on low income, has taught me that I can wait until the price drops.

That makes a ton of sense.

Speaking of cutting edge tech, the safety pins on the chair covering should be a featured write up!!

Ohh, those. That was just the fastest way to keep the sun lounger blanket, where I want it.

Easier to clean than the chair. Pull off, remove before wash pins, dump in washer, dryer, reattach pins and remount. Easy peasy!

I got it for my dedicated gaming chair as protection/easy wash cover and because my thighs tended to stick to the leather.

I have stopped using that chair as it was perfect for gaming, but it became slightly claustrophobic and hot when doing ordinary work. I usually sit with my legs farther apart than the gamer chair allows.

Now, hows that for writeup?

Oh what a bummer.

I have just been notified that my second set of 32GB ram is delayed from the supplier and first expected at my vendor at 12/5-2020.
I am a little miffed (Okay Very!) that they are keeping the rest of my order of 2 SSD’s and a BD writer until it arrives. It is not their policy to split orders and no flexibility and yes I have asked them if they Could/would send them.

There is no reason to start the build until I have the SSD’s and now I will have to wait until 14/5 instead of having my build up and running this weekend and add the ram when they arrive.

Blargh! And it was the same with my last order from them. It is very lightly that I will not be using them again as I consider that rubbish customer service.

Sorry for the rant, but come on!

Yeah, that stinks when things get delayed. I manage to alleviate that by piecemeal upgrading. A video card here, an SSD there, RAM later. About the only thing I ever bundle is CPU and mobo, and that’s more because the amount of time between upgrades usually means a chipset/socket shift that won’t allow me to keep a mobo for 2 generations.

That’s what I will have ahead of me next, sigh.

Next round will be CPU, mobo, RAM and probably a new bigger case (although that I could do now).

Over time I’ve upgraded the GPU, overlocked and watercooled the CPU, added all the RAM the mobo can take, got a better power supply…but soon I’m going to have to bite the bullet and pretty much only take the GPU, power supply and SSDs/HDD to an otherwise new rig.

Just powered up my new build for the first time . No loud noises , no smoke and no boot problems ! This proves beyond a shadow of a doubt that any idiot can build a pc

Tomorrow i’ll be copying extra stuff to the ssd i’ll use temporarily for transferring , and installing the old 1070 into the new build .
Waiting on Ampere and RDNA 2…

I’m leaning towards this on my next upgrade; thinking the only real issue is cooling; need to research if I can re-use my water-cooler on the new one. Though maybe best not to mess with that as it will be a 4 year old unit by then. Ugh.

Word i have is AIO’s are good for 6 yrs max . Being old school (and well…just old) i could not bring myself to mix water and very expensive electronics . We’ll see if a Noctua NH-D15S can cut the mustard with a 9700k at 5.0 ghz .

I overclocked in the old days, but the last I did was pushing my 2600k to 4GHz, which was a modest one. I did it with the stock cooler.
My 6700k I didn’t bother, and I doubt I will with the 9700k either. The built in turbo core mechanism now gives you pretty much what you can get. While an OC can give boosts to benchmarks, and certain apps, I’ve not noticed any benefit in my games, which is what I would be doing it for.

To spend a lot of time, and money on a better cooler, just to see a 1-2 fps increase when I’m already at 60 or above in everything? The value isn’t there.

I have to agree. Most games are single core loads and these 9th gen processors can turbo 4.5ghz or more for a single core, some multiple. Overclocking so you guarantee those speeds on all cores won’t really help much other than pushing that single loaded core a bit further or holding it’s turbo speed all the time. Intel has been reworking Turbo boost to make it so people don’t have to OC, bringing the performance to all users without technical skill.

Still like the giant AIO though, low fan RPMs for CPU cooling is nice.

It is time. I will be away for a while.

GTX 1070 along with a 4TB HDD will be pulled out of the old girl and the GTX 970 will take over main graphics duties.

I am not looking forward to setting up the cablelling for 2 multiscreen PC’s, 9 controllers, mouse, 2 USB keyboards, a PS2 keyboard (If bios don’t see the USB’s) and a trackball.

I foresee the Cable Jungle.

I foresee the Cable Jungle.

Ya made me look…I have a problem (the first step towards recover):