MRE or Rations you tried

I was reading “One bullet away” and they were talking about MRE.
I had to relate to the fact that during my Military Service we were “encouraged” to have a couple of days of only K rations (our MRE back in the day- year 2000).

I basically had a nice time eating that- it wasn’t dramatically bad. It was just… canned stuff. Yeah it tasted poorly but never really too horrible- with one glaring exception: 1 tin can of poultry meat.

Holy ■■■■. That stuff was really horrible.
Now, I tried all sorta food in my life and the only thing I didn’t have the stomach to eat was a Goat’s brain that was cracked open from its skull in front of me. Jeeze, the smell.

Now, If I had the choice between that Tin can of poultry cooked and all and that brain RAW, I’d go for the brain.

I used to get MRE’s for when I went on long canoe trips. I always found that they were way better then the civvie freeze dried, just ad water stuff. There was one Canadian one that I had that had salmon. It was pretty tasty.

Ohhh, The MRE… I was ARMY so I got the full experience. I ate a lot of that between Desert Storm, and the end of that Century. Spaghetti with meat balls, Chicken ala king, Ham Slices and who can forget the breakfast omelet. The Omelet was like drawing the short straw. You were to make coffee and eat a Oatmeal Bar with it. Of course, it was not until after Desert Storm that they got us the Chemical Heaters. It was basically a bag you put the meal in, add water and the whole meal was hot. In Saudi, you just threw the meal on top of your vehicle and waited ten minutes… it was piping Hot. Afterwards, you would walk over to that piece of camouflage you had erected over a hole in the ground. Two fuel cans with a piece of 2x4 between them was the toilet. A bottle of water every other day was your shower. But I was young and strong and I thought this was the ultimate camping trip.

Pizza every day does get tiring!

In their defence, they ought to be well rested and really. Not much reason to deprive yourself of the most basic amenities if you aren’t moving around anyway!

You really don’t want to know what the guys floating in the Gulf were eating.

And you forget- for the Air Force guy it was probably, “filet mignon, again?”

Haha, good times for me back then!

So, I did have my fair share of MRE during my military service, and I am one of the lucky ones who really didn’t mind.

As far as I remember ours contained

Many of that stuff has mock names most soldiers know. Most are either word plays or joking alternative uses, like the bread for example which is called “Kupplungsscheibe” (coupling discs) and the crackers were called “Panzerplatten” (armor plates)

LOL there’s a Wiki article about it. There are actually more meals now:

I have one or two funny anecdotes involving the MREs, but no time right now to tell them. I will post them later.

I can never get upset about italian food in MRE!

Plus with a German wife and “Parents-in-law” ( I even have three!) there’s so much funn stuff about food going on!

I had one with chicken and rice one time… wasn’t bad at all.

Just remembered that a lot of guys tried to get chummy with the Brits because they had really nice canned food.
U.S. Army food was… Interesting.

One or two MRE’s is not bad. Living on them is… Awful

One or two MRE’s is not bad. Living on them is… Awful

Well, they weren’t made for sustained use. Two weeks, maybe three. And that still with integration of fresh-er stuff.

One day or two are totally fine. More thatn that and they get you a tad constipated.

Ham and Shrimp Jambalaya. Best ever, but no longer part of the rotation. Came with raspberry applesauce, wheat snack bread, jalapeno squeeze cheese, a Gatorade packet and Skittles. Only thing missing was the lemon pound cake, but that would have made it the MRE of the Gods.

Best part was that a lot of people hated it so it was an easy trade!

Ok, so here’s one of my stories about MRE use:

During some exercise my unit was camping in a forest, doing military stuff. Once a day the Kompaniefeldwebel (company sergeant major) and his guys brought ammo, water and/or tea and something proper to eat (like fried chicken, always a good day!). For the rest we had MREs.
It was pretty fun actually.

Anyway, as we were sitting around the fire one evening, eating MREs, I noticed some kind of bug had landed in my lentil soup. I tried to fish it out using my fork, but it was too dark to really see it.
…so I ate the meal anyway, saying: “Well, mine got more protein”. A few of my mates were a bit shocked.

And it became a running gag, almost a ritual. Before eating everyone looked into their meals saying: “No extra protein here.”

…so I ate the meal anyway, saying: “Well, mine got more protein”

Like free bugs that smash into your mouth when biking! Free energy refill!

When I was in Pensacola for recruiting school, the AF folks down there were actually getting extra per diem to compensate for the “substandard quality” of the food. I mean, the galley there wasn’t as good as in Charleston (NNPTC galley was pretty much amazing), but it was better than literally every restaurant in Fayetteville.

Trivia: when I went through basic in 1976, we were issued M16 (before they were rebranded as AR-15/M-4). They still had the triangular handguards and used the 20 round magazine, that we were trained to download to 18 rounds to prevent jamming. Anyway, one day on the range the drill sargents yelled “Blake”. I was the only one named that in a company of 150 guys, so I came running, expecting that I had screwed up big time. One of the drills took my rifle away from me and proceeded to snap the wires around a pallet of C rations. Unfortuantely, I was also the only one in the company with the older 3 prong flash surpressor, so had to always be present when a ration pallet showed up. The newer rifles had the bird cage type which couldn’t be used to snap the packing wire.

I was concerned about what it would do to accuracy, but didn’t have much of a vote in the matter. If memory serves, the Chicken A La King was the only one reasonably eatable, and that we had small packs of cigerattes in each ration. I didn’t smoke, but we learned that a smoldering cigarette stuck in the sand would keep the mosquitos out of your tent for a few hours.

the only one in the company with the older 3 prong flash surpressor, so had to always be present when a ration pallet showed up.

Seriously?
Wow. When I enlisted I had the decency of getting me a proper Leatherman.

I’m pretty sure that was pre-Leatherman, but regardless, all of our cadre were Vietnam vets and had their way of doing things. There was probably a pair of pliers around, but that would have taken too much time.

I’m pretty sure that was pre-Leatherman, but regardless, all of our cadre were Vietnam vets and had their way of doing things. There was probably a pair of pliers around, but that would have taken too much time. The P-38, developed in 1942, is a small can opener that was issued in the canned field rations of the United States Armed Forces from World War II to the 1980s. Originally designed for and distributed in the K-ration, it was later included in the C-ration. As of 2017, it is still in production and sold on a worldwide market. The P-38 is known as a "John Wayne" by the United States Marine Corps, either because of its toughness and dependability, or because of an unsubstantiated story that the ac...

Yeah, P-38 will open cans, but not the thick wires wrapping the C ration pack. This is what they looked like. 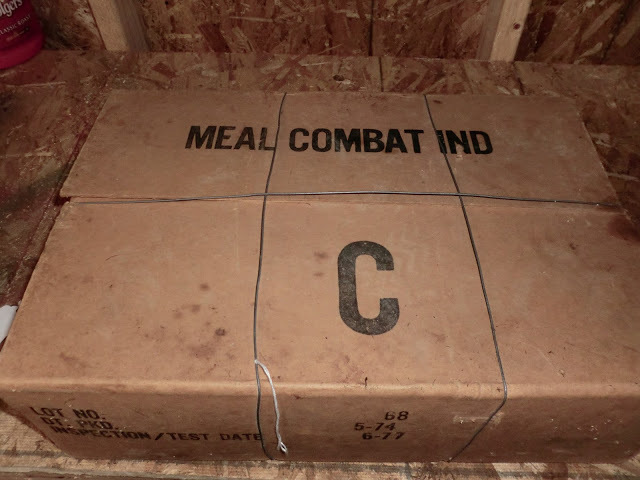 Example of Vietnam era M16 with 3 prong flash suppressor. I honestly can’t remember if it had a forward assist handle, because I don’t remember being trained to use it in an immediate action drill. Could have though. That was a long time ago.