Just got my Quest 2 today, and still experimenting. I wouldn’t mind one for the wireless, to play games where I leap around a bit, especially if I can get a wifi6 in a big space and then wire it up to my PC on another floor. They’ve been cracking down on fake facebook accounts (the spice must flow, prole) but I’ve still got a couple that might work.

This really is an eye opener coming from my Rift S.

Colors better, resolution apparently much higher, no discernable screen-door affect, and even the fov seems much better. The inside of my ship and interior and exterior of stations never seemed larger or clearer.

Plus, sitting downstairs in the Livingroom happily playing Elite Dangerous wirelessly is quite a trip!

And if anything, its even smoother than my Rift S.

can get a wifi6 in a big space and then wire it up to my PC on another floor.

You could walk around the X-Plane VR hangar in real space…!

I don’t understand how the resolution appears to be so much higher in the Quest 2 than in my Rift S, while at the same time the framerate is also higher.

Sitting in the A320 and being able to easily read almost everything in the cockpit without needing to practically push my face into the instruments feels like Vr finally reaching its true potential after 3 generations.

That Air Link First Impressions video looks jumpy as heck! Interesting stuff though. I’m only interested in PC VR with the link cable though and the reviews I’ve seen make the Quest 2 look like a pretty good upgrade over the Rift S plus the Quest 2 with an authentic Link cable would work out to be $400 CDN less than the HP G2!

I’m real close to pulling the trigger … change my mind.

I’m real close to pulling the trigger … change my mind.

No, as the Mudspike Mantra is ‘Hit the Checkout Button now!’.

It’s a really good value headset, and if you’re ok with the facebook account stuff then it’s a really solid product.

The tech comparison is

Not sure if that helps or hurts. The Reverb is very (very) clear but it’s not a general VR headset, it’s really just for sims and even then it’s on the edge of what most sims can push pixel wise (IMHO). I love my Reverb, but I can see the wisdom in the Quest 2 for sure.

Thanks @fearlessfrog! I don’t have a Facebook account (never have) so that might work to my advantage. If Oculus/Facebook wants to sell me a VR headset at cost just so that they can get information from a BS account that I’m going to set up, more power to them!

I hear they sell the Quest 2 to the private sector (no FB account needed) for $799!

If Oculus/Facebook wants to sell me a VR headset at cost just so that they can get information from a BS account that I’m going to set up, more power to them!

Do be careful on the fake account. It will need a real phone number to verify and a realistic name. Also if you don’t post on it now and again there are reports of people getting locked accounts, so you do need to make it semi-active, fill in a bit of profile that looks real etc. Even if you don’t have an account on Facebook there is likely a shadow account already created for you from other people’s photos and posts, and they’ll try to match it up with one of those.

If the FB accounts gets disabled then the Quest 2 is a brick, and the review process to get it turned back on can be lengthy. The safest way is just do a real account, real name, real photo and then just ignore it.

@Elby slowly lifts his finger off the trigger.

Remember folks, if you hate the thing, it can always be returned…

Which is what I would have done if this thing had proved to be only a mild step sideways from my perfectly working Rift S.

Instead, I find the colors more saturated, the graphics clearer, (how?!) and the framerates actually higher.

To be honest, in my Rift S, unless I turned AA to nearly 200, graphics in MSFS were simply “fuzzy” and I’d pretty much decided that it was because MSFS was just not quite ready for primetime in vr yet.

Then when I got the airlink supposedly working, it was choppy as heck with a black border, and I was thinking, am I gonna hafta’ send this thing back?

Then I read online about opening the Oculus debug tool and making sure certain Link related settings were at zero. (They were not, because I had been fiddling in there long ago regarding another issue and forgotten)

Still not quite kosher on all fronts because of a slight jitter, but then I saw that the Oculus tray tool had some preset internal numbers available for the Quest, based on your system specs.

I tried that, and BAM!! perfection and in every way better than my Rift S, even when sitting downstairs in the Livingroom and flying wirelessly.

So… Yeah, this thing is staying! (And its miraculous in Aerofly)

EDIT: By the way, if you had a Rift S and prescription lens inserts, they will fit and work fine in the Quest2 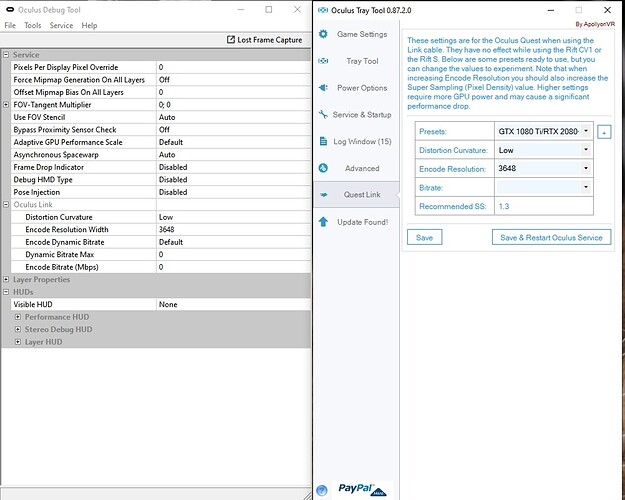 That’s extremely helpful. Between toys, whirlybird lessons and acro fuel, I just don’t feel much inclination to spend the money needed to get back into the sim fast lane. But ask me again when the weather sucks for weeks on end. If I open my wallet it will be for a used 2080 and Quest 2 or whatever Oculus brings next.

I grabbed mine from Walmart.com

Interestingly enough, I was about to just splurge and buy it flat out, but Walmart gave me an offer called “affirm”

So I was curious, clicked on Affirm at checkout and that gave me offers to make up to 12 monthly payments on the item.

I choose three months autopay, and that was that. Product arrived two days later, rather than the projected 5 days.

So I got the Oculus Quest 2 (thanks for the tips @HiFlyer).

I’m plugging it into a USB C 3.2 port on my motherboard (not the video card) for PCVR and I’m still scratching my chin as to how it’s still using my 3080 video card if it has it’s own GPU and is not plugged into my video card? (@fearlessfrog ?) I’m confounded. I see my 3080 GPU usage and GPU memory getting up there but the video card is staying pretty cool!

It’s just a data stream, so USB-C will do it. The GPU is still being rendered to and doing the work for the game, it’s just the Oculus software is grabbing the result and squirrelling it down the USB-C as data to be uncompressed on the Q2 end and then shown. Some monitors just use USB-C (a few on the OSX side of things) so it’s all good.

Thanks and it’s friggin’ amazing but you can see where I’m coming from after all these years … you USUALLY plug graphics devices into the graphics card LOL! I guess since the Quest 2 is a standalone device with its own GPU, its just rendering the data its getting from the stream.

I still think it needs to be plugged into my graphics card LOL!

I guess I’m seeing the power of graphics cards from the perspective of Cryptocurrency miners now.

you USUALLY plug graphics devices into the graphics card LOL! I guess since the Quest 2 is a standalone device with its own GPU, its just rendering the data its getting from the stream.

Absolutely know what you mean, the funny thing is that HDMI offers far less bandwidth than USB-C now, and that sounds weird to say out loud. The Quest 2 has a decent mobile phone graphics card (a chipset called Snapdragon that high end Samsung’s use) in it, so stand-alone it runs a variant of Android customized to be more efficient. That local GPU is really just being used to decompress the data-stream that your real graphics card provides - think of it as a kind of ‘remote desktop’ type of thing. The data is two way, as the headset is providing positioning info for your head/controllers tracking back to the game. The onboard batteries of the Q2 then get topped up with the USB power line. It’s neat tech.

One last question … how does the Link Cable work? They say its fiber optic but I thought you needed a light source for that!

how does the Link Cable work? They say its fiber optic but I thought you needed a light source for that!

Things like USB are serial (the ‘S’) so they have hardware within them that encodes signals as a sequence, to be decoded the other end. An optic cable has a very small LED laser emitter/detector (they tend to be built into a single unit both ends) that literally flashes light as part of the encoded signal. Rather than a ±5V drop, you have light pulses doing the data, the light strands are also in parallel, so it’s not just a single light but a matrix read/written either end. Optic can be good as even in a heavily error corrected serial line thin wires are susceptible to interference, especially when getting so fast and so small. I’m going to get @chipwich teasing me about being a wikifrog now.

I’ve had quite an adventure with Oculus link, as the Quest refuses to recognize anything but my 2080ti’s built in USB-C as a valid 3.0 connection.

Its also quite particular about the link cable, and really demands a good one (not necessarily the expensive Oculus version) to get the best data throughput.

A bad choice of cable will result in dropouts, stutters and all manner of unpleasantness, and its pretty much required to run the Oculus cable test to get an idea of what you have to work with.

My regular cables cannot even complete the test.

My new cable can reach a steady 3Gbps, which is still below the theoretical 5Gps of the bespoke Oculus cable, but should be good enough for government work, especially as most people are reporting only 1 to 2 Gbps or less. Plus it has enough Ummmph to successfully charge the headset as you play, which is not a given, with some cables.