@apollon01 suggested to do some soaring together in MSFS2020, to try out the newest version of Kinetic Assistant in multiplayer and have some fun, including flying towing planes and the like.

This thread will be used to organize meetings for that.

I prefer TS as I don’t want to make a Discord account but in a pinch I could try and create one (again. Last time I tried they refused my email-adress).

However next week will be a problem on week days as I will not be at home.
So if we want to try it in the next few days, for me it would have to be Sat or Sun. In coming weeks weekdays should be fine.

Shall we give it a try tomorrow evening? I can be ready from 20:00 UTC earliest.

As for the comms:

Shall we give it a try tomorrow evening? I can be ready from 20:00 UTC earliest.

Sure!
Let’s try 20:00h UTC then, I have a bit of time until the Super Bowl coverage on German TV starts.

But I suppose we need to run a server…?

There are some free servers around that I sometimes use. I’ll just post a link if I cannot get that discord thing to work.

I have ridge-soared so far only around LOWZ and LOIJ but I am happy to discover new location if you suggest some (EDTB sounds fine too).

Discord is really easy to use. Just join a room, set it to voice actuated and shoot the breeze.

WTF I must have been drunk earlier. The Super Bowl is next week of course.

@Aginor, I was wondering if you’ve noticed this behavior with the DG-808S? …

I noticed a strange behavior. After 15/20 minutes of flight I systematically get a gradual drop in performance until it becomes unplayable (from a smooth 30fps to less than 2fps in 10 minutes time).

I haven’t yet installed the DG808S because it seems like a bit of a kludged MSFS2020 install to me and I’m hoping I don’t have to worry about a drop in fps.

I’ve done several flights of 40+ minutes with it and I haven’t noticed anything like that.

@apollon01 flew the Piper and towed me up, then winch launched himself from Füssen (EDGD), we flew over Castle Neuschwanstein and then east through the Alps, to Ohlstadt. We passed that field though and continued to Benediktbeuren (EDDA).

@Elby joined us there and we did a bit of flying, testing both winch and aerotow starts in multiplayer.

Sadly my sim crashed on me after two hours, just as I was about to make my last landing in Ohlstadt, and we did encounter some problems on the way (such as me inadvertendly disabling my wind which caused a rough out landing. Also @Elby seeing me as a different plane) but nevertheless it was a lot of fun! 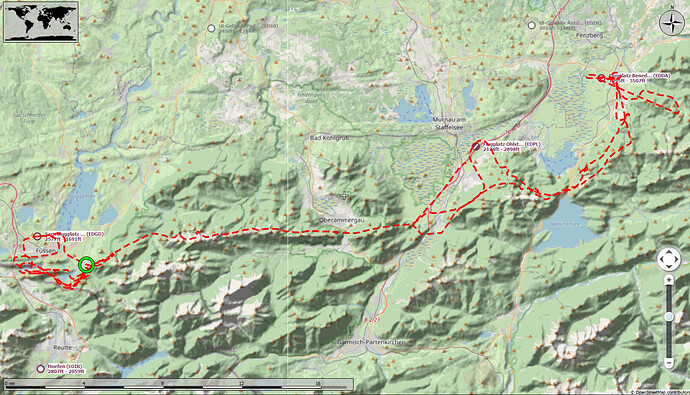 Getting towed and flying formation with the tow plane afterwards. 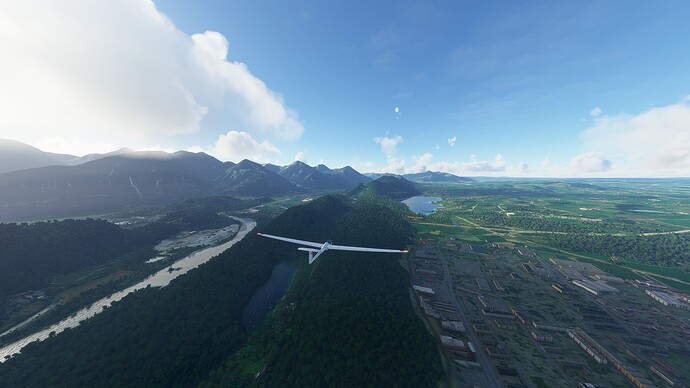 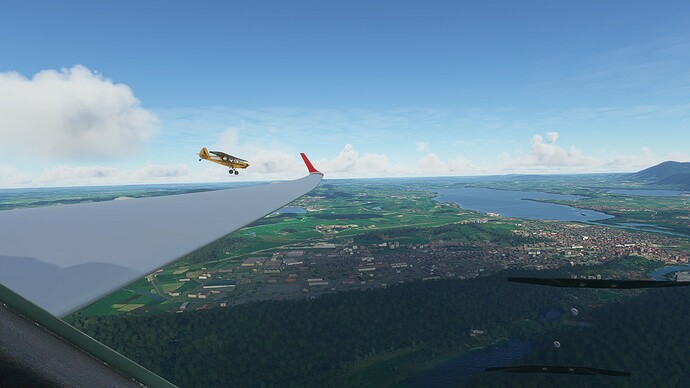 Castle Neuschwanstein to the left, @apollon01 on the right.
Pro tip for multiplayer soaring: Tell your wingmen about your flap settings. 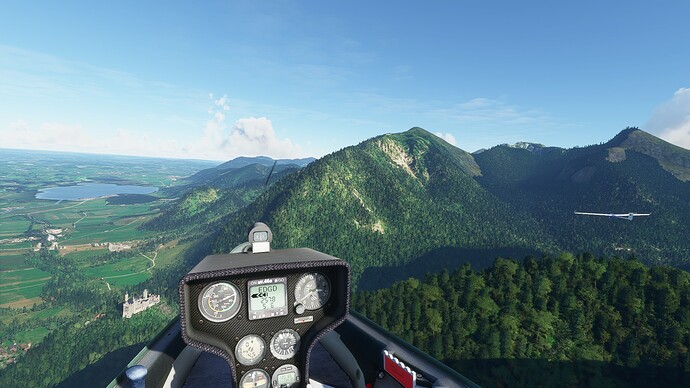 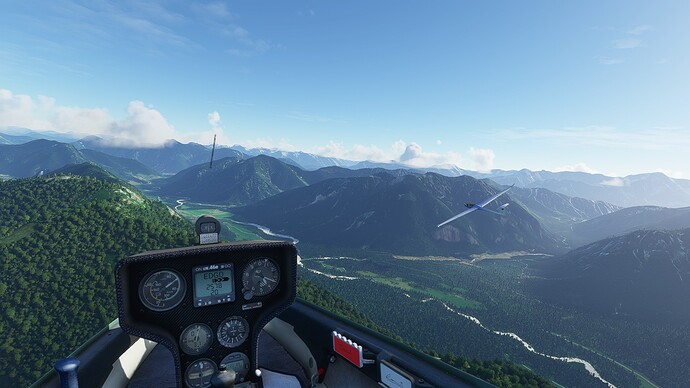 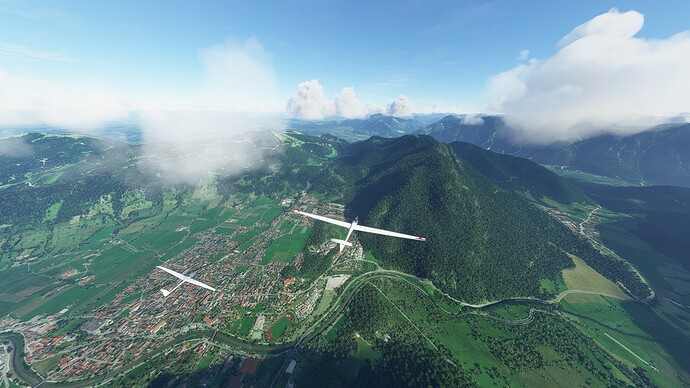 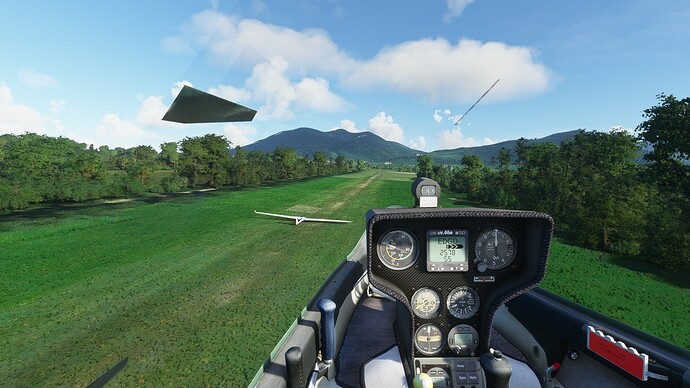 @Elby joining us in the second Piper 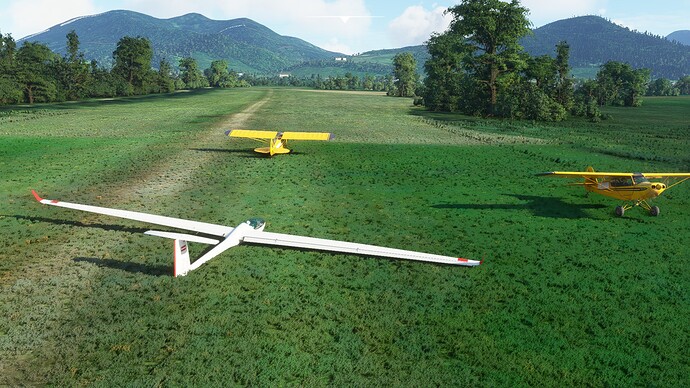 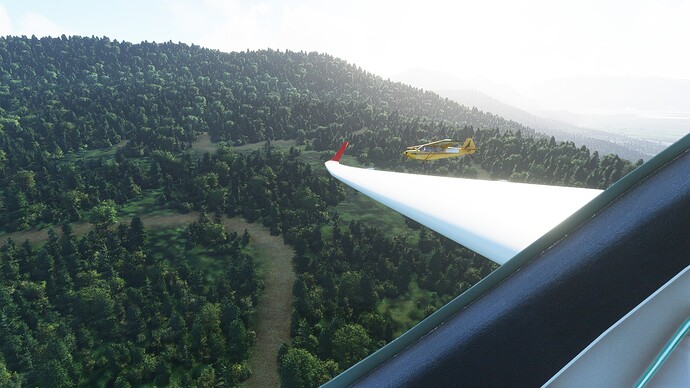 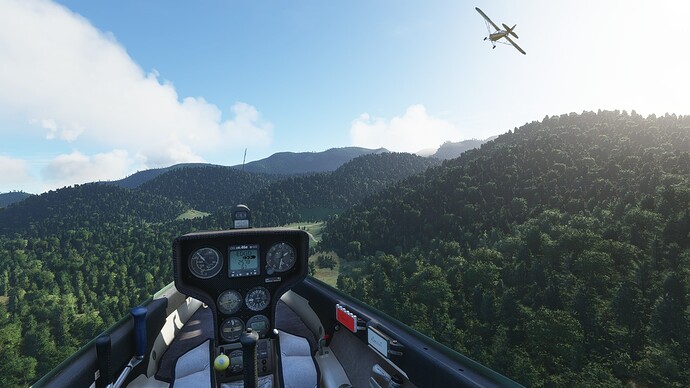 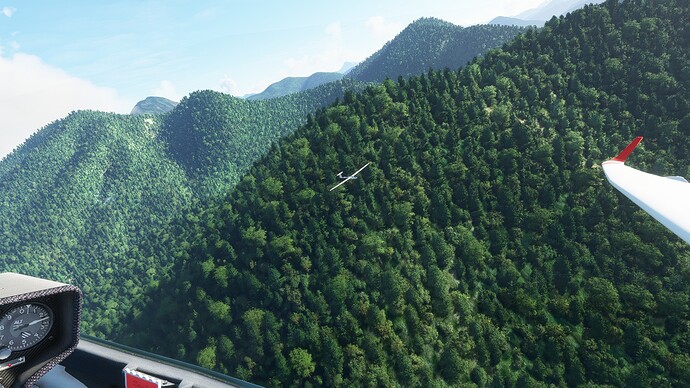 @Elby in the glider 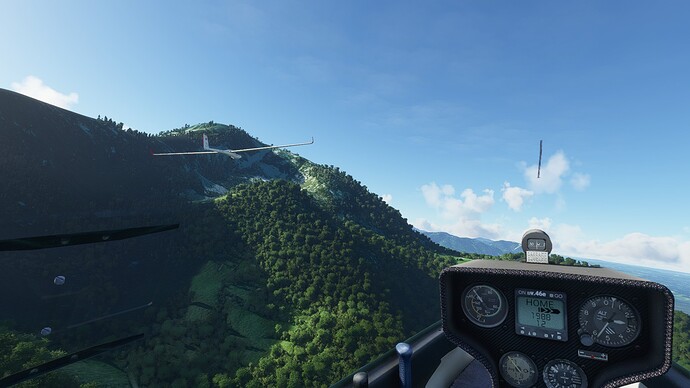 @apollon01 taking some screens flying something that actually has thrust. Makes life easier. 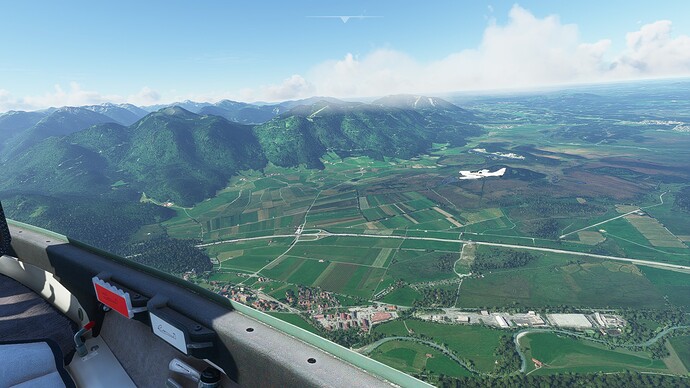 Few shots from my side (excuse lower res as I was in VR). 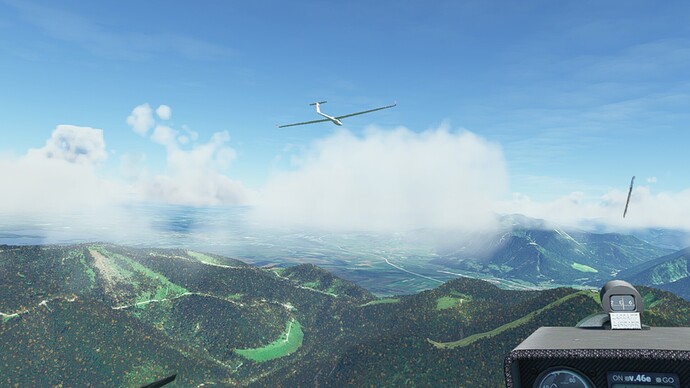 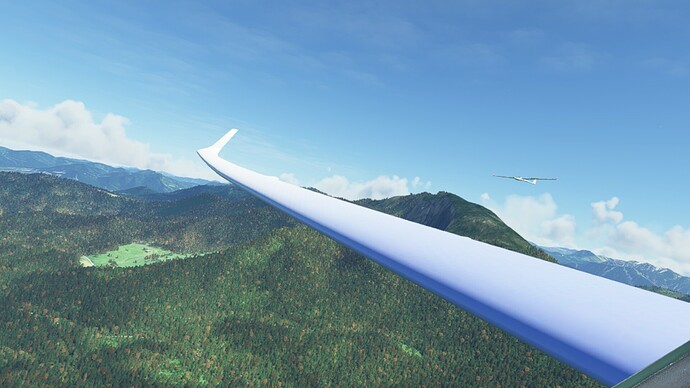 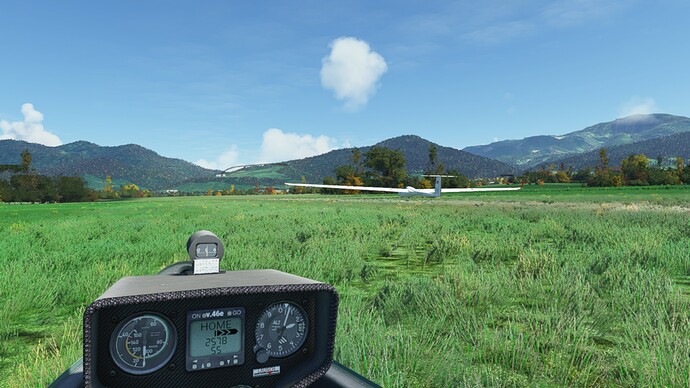 Getting ready for another tow with Elby joining the party 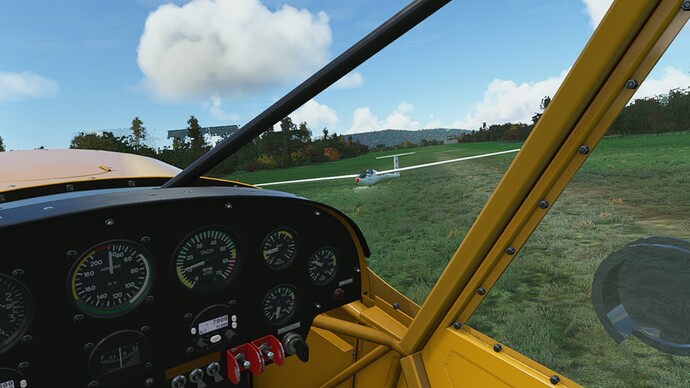 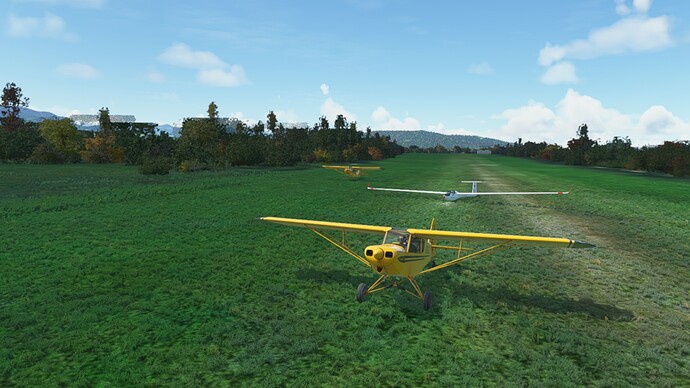 Hard life of a tow pilot 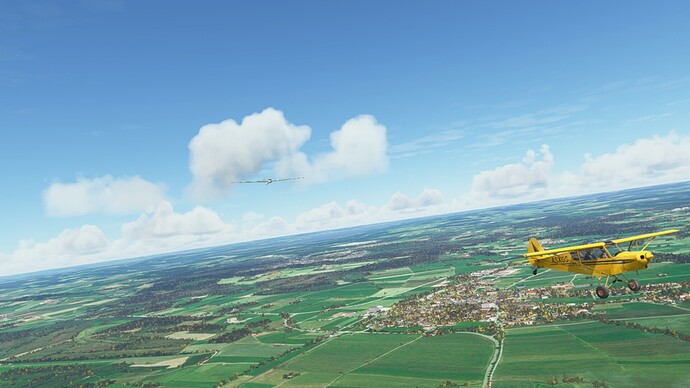 There’s no trigger on that stick! (and no guns for that matter) 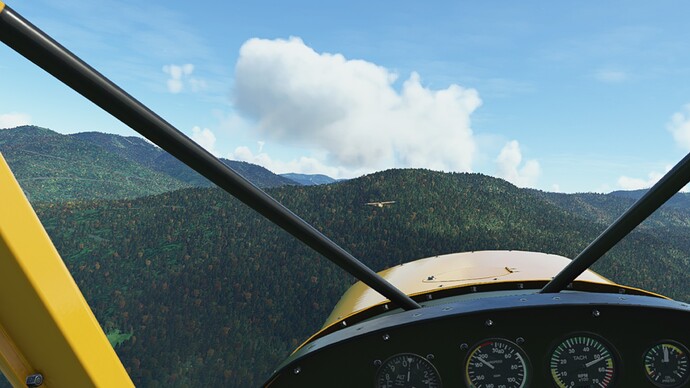 Having fun in the sky 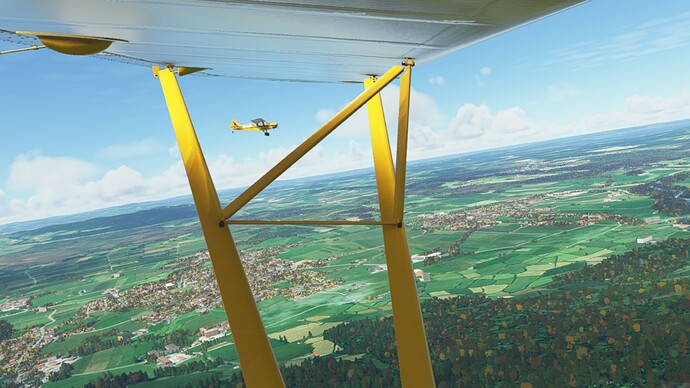 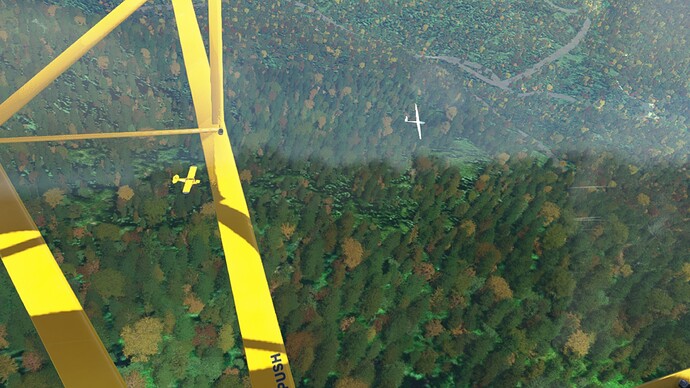 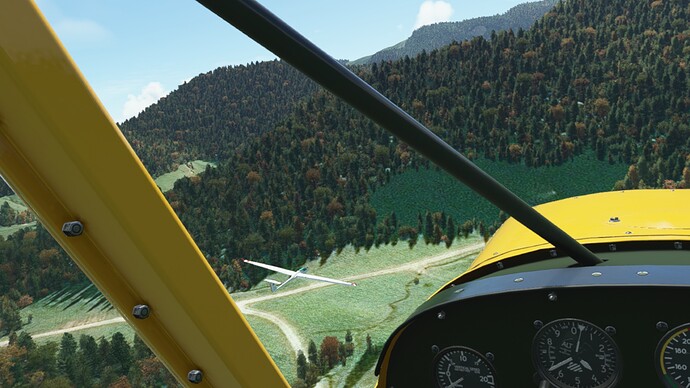 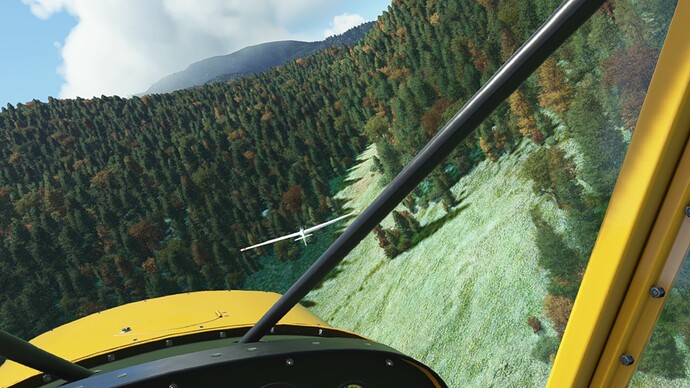 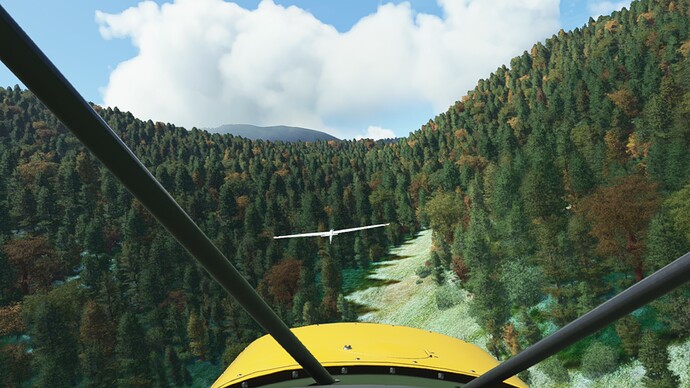 Hopefully we can repeat soon

Btw., I hope that my accent wasn’t too thick.
It tends to become worse when I don’t speak English for some time.
I write a lot but I rarely speak. And I am a bit self-conscious about it. I sometimes wish I was Austrian so I could sound like the Terminator (@sobek kinda does that a bit).

Honestly, I tend to have understanding issues rather with accents of native speakers

I was more concerned with my Canadian accent eh!

Alright, I can assure both of you that you were absolutely fine to understand as well.

@sobek kinda does that a bit

I do live very close to where Schwarzenegger was born (not originally from here though), so i might as well embrace it.

Nah, it isn’t nearly as bad.

The most noticeable thing is the Austrian-typical elongated vowels that apparently carry over to other languages.

So guys which settings you use for thermals? I tryed some like 0,5 0,2 but they were much too strong because I had 8/ms + permanantly and so it wasn´t challenging.

Are you a real world glider pilot?

Asking because most people I saw found the thermals too weak and not too strong.

But yeah, I usually use something between 0.2 and 0.5 as well, and they feel a bit too strong at times. But it could just be that the planes are actually too good and the thermals alright.

What works for me to make it challenging (probably because I am a terrible glider pilot) is to make them smaller instead of weaker.
You still get some good lift if you circle them just right, but finding the center is the challenge.

I make mine no bigger than half a mile.