As some of you know, I’m in the process of upgrading to commander. 2 weeks of ground school is complete. Now awaits 5 sim lessons and a skilltest. After 17 years as a first officer, of which 12 are on type, I feel I am as well prepared as I could possibly get.

However, viewing the cockpit from a new angle, and teaching the hands to swap duties takes some effort!

I have made myself a new flightsim, to help me through the training… Hey! Stop laughing! If it’s stupid and it works, it ain’t stupid. 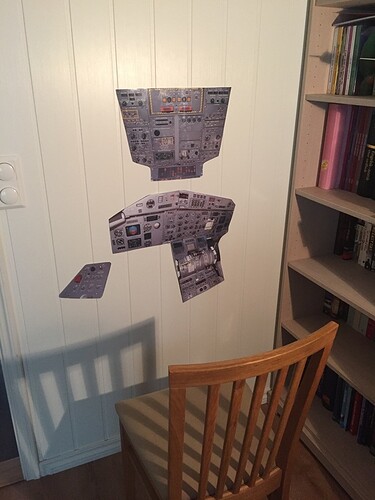 It’s gorgeous and very realistic! I’d love to build something like that at home!

Had you used the bathroom for your flightsim and the toilet for the seat, you could have also introduced turbulence
while developing muscle memory for the controls.

Congratulations on your upgrade @Troll !
On the business/corporate side of flying, at least over here in the US, the airplane is almost always flown from the left seat.

I was never a CFI, so I think I have only made two or three landings from the right seat in a real airplane. We do have to check off a right seat landing in the sim at each training event though (every 6 months).

Congratulations, err - good luck @Troll. What equipment are you on?

Takes considerable skill to build something like this, I can tell you!

while developing muscle memory for the controls.

On the business/corporate side of flying, at least over here in the US, the airplane is almost always flown from the left seat.

I’ve heard that. We fly every other sector. With 8-9 sectors a day, you have to share the load

Also, being commander you have to qualify for both seats. We do a lot of lower rank commander flying due to airfield recency demands.

What equipment are you on?

Thanks for your support, guys!

Takes considerable skill to build something like this, I can tell you!

Speaking of skill, I haven’t congratulated you on finishing the airscrew! Excellent job! It looks gorgeous!

Just to be clear, we do swap legs. It just means that there is a 50/50 chance the guy/gal in the left seat is the SIC on that particular day. In a business/corporate flight department, it is not uncommon for every pilot to be captain qualified. We generally take it in turns to be the PIC on a trip by trip basis.

This was my hotel room paper simulator when I was going through Challenger 604 initial training. I have similar posters for the CE550 Citation II and Global Express. Very useful for learning flows and where everything is! 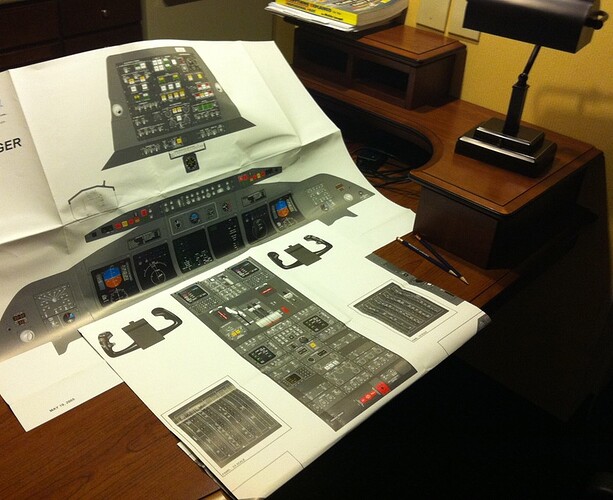 Do you pilots also use the applications that simulate all the instruments?

Do you mean the systems simulations they use in the classroom?

Ah yes that’s what I meant!

That software is a great teaching aid. It is a pity that they won’t let the clients (aka pilots) have personal copies of the package.

I am not much of an Airbus fan, but after watching this preview last night of the upcoming FlightFactor A320, I could be. Wow. Question for you pros - if you had a consumer sim that was modeled accurately enough that it allowed operation of the aircraft by your company’s POH, and you used a VR setup, would that not be sufficient for supplementing your official training? In other words, unless your company has it’s own commercial simulators, there must be some variances in the installed equipment or software if you lease time on one, right?

I haven’t congratulated you on finishing the airscrew! Excellent job! It looks gorgeous!

Thanks! I really should update the thread here at Mudspike as well…

would that not be sufficient for supplementing your official training?

Absolutely!
I used a DHC8 add-on for FS when I did the initial course, 12 years ago.
I would’ve loved to have a VR compatible cockpit to work with! I actually bought a 360 camera to take a pic from the left hand seat, to use with my phone and a cardboard VR box. Alas, the resolution of the camera wasn’t good enough.
In a few years though, this will be how we train. At least as a supplement.

In my company we have a Flight Training Device with basic outside visuals. No motion, but still nice to simulate the flight phases as you practise the procedures.
The CAA approved training has to be performed in a full flightsim though.

Very useful for learning flows and where everything is!

Invaluable!
I did think about ordering DHC8 posters, but decided against it as we have a lot of company specific modifications. So I took pics that I printed and did some old fashion cut&paste.

An excellent idea @Troll, and good luck on the commander position.

I wonder if a series of close up photos and a simple 3d model would make a great static cockpit photogrammetry set-up in VR?, i.e. SteamVR/Environments/Photogrammetry - Valve Developer Community

Actually, ignore that and make sure you ace the real sim lessons and skilltest, I don’t want to be responsible for a huge side-tracking thing that puts you off.

a huge side-tracking thing that puts you off.

I did toy with the idea, briefly, before landing on your conclusion