This is a rewrite of my previous T16000m threads.

All the buttons on the base still works.

I would strongly recommend to collect the needed parts first,plan ahead, drill all holes before any assembly.

I would also very strongly recommend to have longer wire ends in the handle than I had.
Some of them where close to claustrofobic to work with.

I have at long last put the finishing touches on my first modded T16000m.

At the time I used these for my 5 way switches.

The grey one is a wheel from the Hasegawa 1/72 US Aerospace Ground Equipment Set.

The green one is a roller from a ROCO Minitanks set. Both drilled to fit.

Most annoying thing about them, is that I had to push on the sides to use Up/Down and Left/Right.

Add something! But What?

A looong time ago, I killed the minijoystick on a TM TWCS throttle, when trying to remove it from the PCB. I’m just saying “Don’t apply to much heat!”

I cut the top off the TWCS thumbstick and from another model replacement thumbstick, I have bought in anticipation of my controller projects

Having cut off the top I cleaned it with Acetone and it got all sticky.

“Hey great, Acetone is the Glue!”

I propped up the stick, so the button surface was as horizontal as possible, dabbed enough Acetone on the gluesurfaces to keep them moist, waited for a bit to let the Acetone work, while keeping to ad small amounts of Acetone to keep moist, then carefully placing the new top on the button and press hard for a while.
The most important thing is to be patient and not move stuff around until the Acetone has evaporated and the bond has set.

Now it is a breeze to flick the 5 ways around.

I just picked up these:

Both will get the buttons on top treatment avoiding the mistakes I did with the first one.

One will be a right hand version, to replace my CH FlightStick Pro and the other one will be a lefty and get an extension, so I can use it as a center stick.

I think that the biggest challenges at this point will be the extension, as I wish to retain the twist and may be making it lockable. The next is the center chairmount, as I have no idea about how I want to do it. I may end up cutting of the sides of base and rearrange the PCB’s in a new box. Well. We will see.

Have you had issues with the twist axis? Mine went crazy. Other than that the stick is great for the price.

I haven’t really used the twist axis that much, so I can’t really say. Yea it is great and fairly easy to mod.

Settle in. You may be here for a while. You may as well get a glass or bottle of your favorite beverage to enjoy.

I have had simwithdrawal for a while. I Broke my T16000m back in the end of may and having had to prioritize other things afterwards.

I have only now found the time for repairing it and have just finished it. I am very happy!

It took me several hours over 2 days.

The cap for the center 5 way switch fell off.
Note to self. Do not try to move any DIY controllers around by grabbing a glued on button.

In trying to put it back on with CA glue, I failed to turn it upside down, so glue got into the switch.
Note to self! Whenever you are using easy flowing glues, turn the objects so it flows away from moving parts!

Back and Center Push was stuck. I managed to loosen the back push, but when pressing center very hard, all 4 direction switches would activate and still no reaction from the center switch.

Time for a replacement.

That went fairly well but there where a couple of snags.
Another note to self! Hotglue is great for keeping stuff in place, but can be a pain when you need to remove it again!

One more note to self! Always be careful with a knife! It can cut you up faster than you can blink when it slips! That ¤%&/&(/ hotglue!

I misaligned the switch so I had to cut it out again.
More note to self! There is a high chance of ruining electronic components when trying to install them with hotglue multiple times or using to much at the wrong place! It still works but 2 of the buttons have a lessened clicky feel.

Fire up the PC and test if it works. Yes it did.

Carefully glue the button top to the switch and let the glue settle.

I couldn’t remember how to route the cabling inside so I fiddled with that for more than an hour. Then I discovered that one of the wires soldered to the switch points on the PCB had snapped. Oh well, soldered back on.

More fiddling including screwdrivers to push wires away from the bodyjoints.

Ahh! Finally assembled! Another test and then slip the piece with the center 5 way into place (That piece was the center switch before the modding.) and test.

Whenever the center press on the new 5 way was activated, button 1 would activate. Carefully prying out the piece and push the wires in the hole around. Okay, now it works so slip it in again.

Turns out that 2 wires connected to one of the ground pins on button 1 where frayed. When the 5 way piece was pushed down, they would rub against one of the live pins and thereby short the switch.

The PCB with button 1 pins (white) and snappy wire (red)

I found the main ground connection on the PCB and after burning of the lacquer I soldered on a wire and connected that to the repaired wires instead.

The wire have snapped of from the switch point again.

There are 23 wires in the handle and not much space for them to fit into. 11 for the original buttons and the twist pot plus the 12 I added for the mod.

Ohh great. That wire have snapped again. Now it is very short.

Self Note! When using hotglue on contact points, don’t use to much as you may need to get it off for repairs.

Time spent. Between 8 to 10 hours over 2 days, most of it spent on assembly fiddling. Those wires just seem to love being snagged between the grip halves.

Sorry, due to frustrations I have not taken any pictures of the repairs. At times I was ready to hurl everything into the wall and attack it with a hammer. Hey! I meant the stick! Not the Wall!

I am happy and relieved that I have it up and running again.

Nice work. The t16000 really is a great stick. All it needs is some of those 12 buttons on the base moved to a more accessible location…

I have been creative

Proff of Concept (There are no electronics in there) 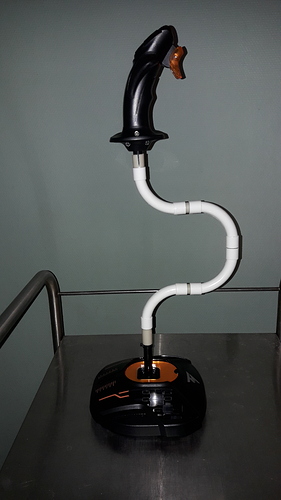 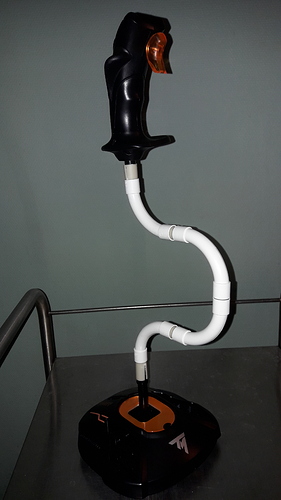 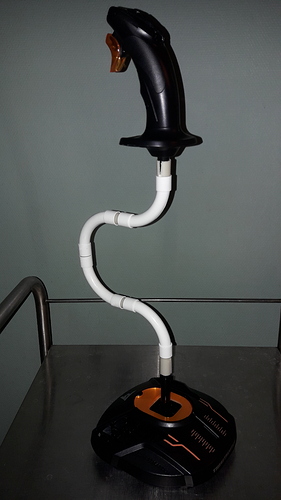 Your joystick., It is drunk!