HNY…What if any New Year’s Fliight Simulator Resolutions are you making this year?
-Learning a New Module
~Spending more time in a New Simulator
-Making Missions or Learning The mission editor

I dream of making better DCS key configuration tool with semi-automatic sharing of configs between aircrafts, devices and possibly even users. Already started the work, let’s see if anything good comes out of it.

That sounds awesome, I dream of your dream coming true!

I’m going to try to actually focus on one module instead of jumping around between them like a crazy person.

I intend to rebuild my PC once more. My CPU is long in the tooth. I hope my crew and me make enough money for me to spend a little on such frippery

focus on one module

thats actually perfect NYs Resolution … the one we wont keep

I wish you well. If you succeed, please resist the temptation to make it bloated to the point of instability. Minimal and reliable will give it long legs and have wide adaption.

Like @speck On the flightsim front, I am going to try and get to grips with one or two airframes and attempt to ‘master’ them rather than get distracted by the next shiny thing. And like @NEVO an aspiration that I probably won’t be able to achieve.

At the moment it will be F-14B and Apache for DCS. I recently bought the Colimata Concorde for X-Plane and I would really like to fly that properly.

Second is checking out F4 BMS in VR.
Have some very fond memories flying the campaign, using F4 SP. However, the learning curve of getting back in to, a now much more advanced, F16 is a bit daunting.
Wish I had as much free play time now, as I had back then.

To fly the Hornet the entire year, with the goal of finally becoming proficient in DCS’s most complex module. Of course there will be diversions for the Phantom and Strike Eagle, but assume that those will take a while to flesh out. And will fly Reflected’s Speed and Angels campaign later in the year, since it will likely take a while debug. That should be quite enough.

I’m only flying tomcat, sabre and Hind this year.

I want to cut down on the chasing my tail.

And tanks. Lots of tanks

I’m only flying tomcat, sabre and Hind this year.

Guess I’ll be shooting down lots of turkeys, eightysixes and humpbacks then

Speaking Of The Turkey…My To Do List in Sims 2023
1.Learn Tomcat LANTIRN Target Pod I have yet to drop a smart bomb in The Tomcat
2.F16 Air to Air Refueling
3.Complete a Campaign I’ve bought many Great Campaign’s but have yet to finish one.
4.Fly Online
5.Spend more time with XPlane 12
6.Finish ED Macey’s "Apache"Book Not really ib Sim Category but I’m sure many here can relate

I will continue my quest to perform a successful aerial refueling without killing myself, or the tanker crew.

In no particular order,

Learn TACAN and ADF nav in the F5

Get better an carrier landings in the F18

Invest more time in the F14.

To fly anything other than the Hornet and Viper on a regular basis. I have flown them 90% of the time in the past year, but I really want to spend more time in the Hind and Apache, not to mention the numerous fixed wing birds I’ve ignored.

I’ll probably keep playing with the DCS Harrier II and the gliders in MSFS, as those are easy entry: no need to put them on the resolutions.

Not flight sims, but related: scale modeling: finish the second Mirage F1 model (a CR), the Belgian Sea King, and one or 2 other jets from the stash

Like speck On the flight sims front, I am going to try to…((Proceeds to make a resolution))

Does this mean you failed your resolution to stop making New Year resolutions?

I’m kinda where I want to be in the sim world. I do OK as a minor contributor with my squad in IL2. I have basic proficiency in the DCS models that interest me. Really it just comes down to performance (as it always has). I want DCS to rock. And that is something it has never done for me. I’ll updade the mobo and cpu once multithreading is incorporated. And there’s BMS! I am still recovering from that high!

Fear the Bones is great fun. Worth learning the Tomcat just to fly it. 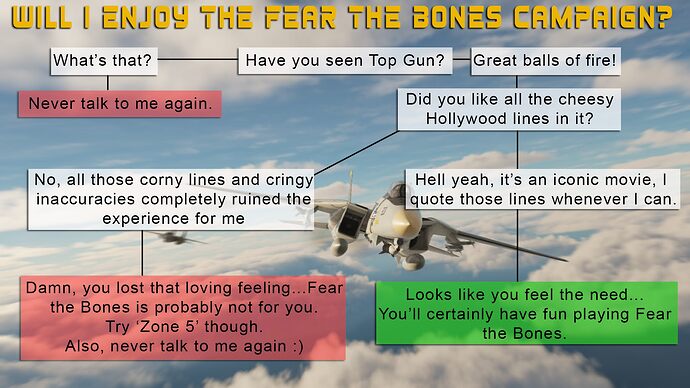 I did say I was crap at New Year resolutions