Got this yesterday on PS4 and only tried a few minutes as a 23Gb patch was downloading and didn’t want to play too much before it was updated. It looks great, like a medieval simulator! No hand holding, difficult combat that apparently is very rewarding once you get the hang of it. Your character can’t read so can’t do alchemy etc until you learn to read (monks teach you). You aren’t a superhero, just a regular person so everything needs to be learnt and then this dominoes onto other skills (ie. the reading/alchemy skills).

Apparently has a lot of bugs but I think I’m going to like this RPG and I can see it getting a cult following and the bugs should be squashed hopefully. Looking forward to trying it properly tonight. Anyone else get it?

Id’ love to… I simply stopped buying games as I literally haev no more free time.

If you’re going to pos tpictures or videos, I’m NOT going to sopt you thought!

It looked amazing from the previews but I’m not sure whether I’ll pick it up. Currently have 20% off at Greenman but that’s still a lot of $$. Games be expensive in Canada now. Will probably wait a long while for a sale.

I Kickstarted that game!
…and haven’t played it since…the second Alpha I think … it looked great though!

Was following this since war of the Vikings went abandoned. How is it ?

I’ve been lucky enough to have a go at it a week early. Pretty impressed overall, really pulls you in. The beginning isn’t the best though and it took a few hours to get to the opening credits, but after that was great. The save system leaves a lot to be desired and there are some other bugs, but nothing I would consider major or get too worked up over. 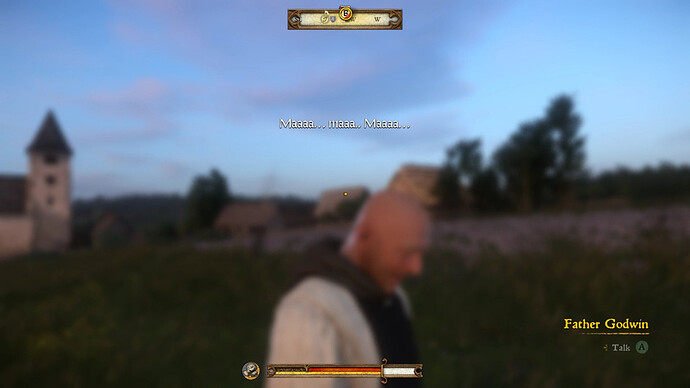 it’s fuzzy cause i’m drunk as a um sheep

Yeah I’ve heard the save system is not ‘real life’ friendly and I think needs a save on exit system. Glad you’re enjoying it

Just in case, there’s a Nexus mod for this game that basically allow to save without getting drunk and without consuming the bottle.

Do keep us posted you early adopters.

I only had chance for an hour last night but I love it already, has a charm about it that clicks with me. Looks really nice on vanilla PS4 and so far no frame rate issues. Only had fist fights (which are tough) and a practice sword fight session with wooden swords but he wasn’t hitting me back but I know the combat will be tough too which is what I like about the game - no hand holding, simplified, spoon fed fare we have these days, like a DCS Medieval if you will lol (if you squint

). I’m hearing lots of complaints from people but they all seem to be about the difficulty and no hand holding so I wouldn’t be too put off if you’re thinking of jumping in.

Anyway, can’t wait to get back to playing it which is always a good sign

Cant play it unfortunately because my Laptop is too weak.

That’s why I went with the PS4 version after trying the beta (ok ‘borrowing’ the beta…) and how bad it ran for me, even though I knew performance would be improved greatly I still had doubts. My PC is running The Witcher 3 at almost full settings though perfectly fine and KCD has the same system requirements but I didn’t want to risk it

Hmmmm I do have a PS4 but…
Of course I selected the PC Version because I always have a fast PC around.
Problem is: my graphics card died and I am kiiinda speculating on a price drop now that the Bitcoin madness is slowing down a bit.

Could someone please explain the correlation between graphics cards and bitcoin? I keep seeing everyone on here mentioning it.

The absolute TL;DR is that the powerful Graphic Cards were used to process demanding software (number crunching) to mine (produce) Bit Coins…

The more graphic cards you could slap together, the more numbers you could crunch, the more you’d get likely to find a CryptoCurrency sometimes worth tens of thousand of real life currency.

…and as there was BIG demand for powerful graphic cards so the prices went throught the roof.

And as the bitcoins, and other coins, are loosing on the value we all hope that the demand will also drop and so do prices… hopefuly soon…

Bitcoins - Or Why Has My Graphics Card Gone Up In Price? Hangar Flying

Disclaimer: I had lunch with someone I hadn’t seen in years last week. For some reason we got to discussing Bitcoins and cryptocurrency in general. I’ve played with these for a while, and find the math really interesting. Unfortunately despite what I thought was putting in some warnings on risk and volatility he msg’d me a couple of days later and said ‘Ok, I have ordered the $5000 of PC parts, what next?’. He is almost certain not to make his money back, but it did show me that explaining somet…

Don’t hold your breath. Nobody is mining bitcoins with graphics cards nowadays, it’s all about altcoins, and those are still profitable.