Anyone tried it yet? 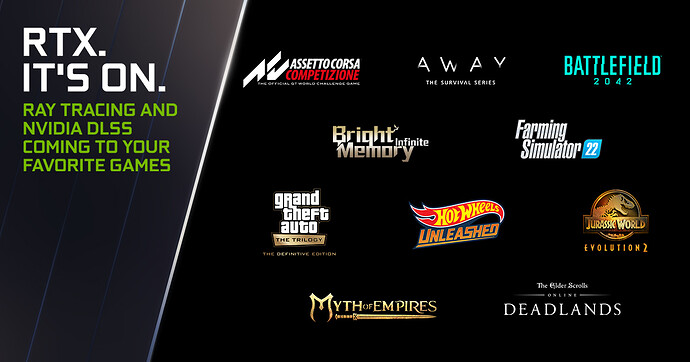 To activate it is pretty simple, and the first title I tried was MSFS in 2D. MSFS works in a fake full screen mode called ‘Borderless Windows’ so I needed to do the following weird things, but most games should be pretty simple and per Nvidia profile. First off: 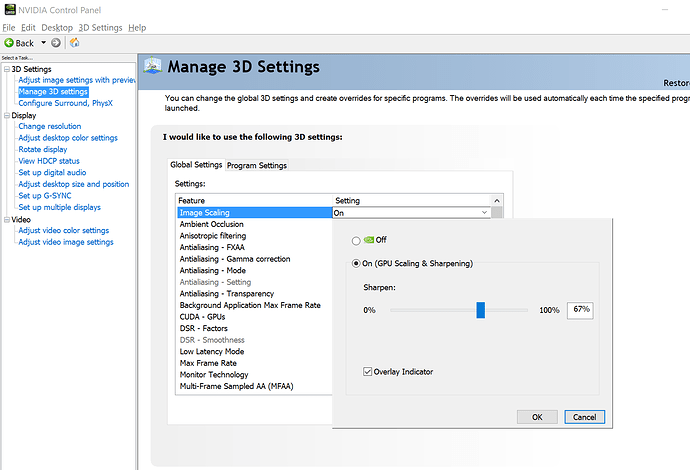 From this handy table we can see that if you have a 4K monitor then you’ll get a new resolution in-game to pick of, say, 2560x1440 (meaning the game is now rendering only 67% of the size from before), but it appears as native 4K on your monitor, just up-scaled and sharpened.

Because MSFS doesn’t use Full Screen DX mode (Borderless Windows) then you can go to Nvidia Control Panel and do this via the ‘Change resolution’ for the desktop and it’ll work ok. e.g.

So a bunch of new ‘Scaling Resolutions’ appear, you pick one, and then start your game and you’re off to the races.

It seems to work pretty well. If you ticked the ‘Overlay Indicator’ in the first option screenshot, then you can also see it is working: 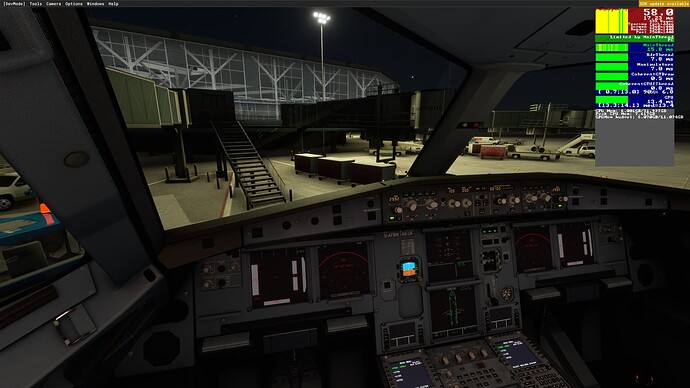 image1920×1080 148 KB
(oh, NIS indicator doesn’t appear in screenshot, plus in this example was the wrong resolution, so you’ll have to trust me - sorry)

Now off to try in VR, although don’t have a clue if it works in that…

I think VR is ignored, as it doesn’t apply it. Shame. One nice bonus is that performance for the driver in general seems improved, forgetting all this new scaler stuff though. MSFS seems much smoother.

A quick test with DCS and it crashed (Black Shark 2 strikes again…), but then I didn’t really need more FPS in 2D DCS with a 3080 Ti so not that upset (VR is another story). The crash might be because I have reshader on already, but not sure.

EDIT: Took out the Reshade bits and DCS seems to work at full screen mode, with the Nvidia upscaler working great so far. As DCS has a ‘Full Screen’ mode you just need to enable it globally without having to change any desktop resolution. With 67% upscale get about 150 fps at 4K, while native 4K is about 100 fps (given I’m using graphics settings that work for me in VR, and this is simple Caucaucaucuauscuauscuasus (sp). I think it doesn’t look as good as true 4K but still looks quite nice.

Anyone tried it yet?

we all knew I was going to try it.

Even I saw that one…

I think VR is ignored

Thanks for the news, @fearlessfrog

As for MSFS in VR, I suppose the combo OpenXR+custom render scaling with the ingame slider actually does the same as this new nvidia magic, right? So the nvidia tech might make sense only if it is actually somehow better than the OpenXR+render scale combo.

It’s similar, but the difference with the Nvidia Scaler (and the AMD FSR used via Reshade) is that you can adjust the sharpening values easily. In VR being able to sharpen in the center is useful, and the setting is fixed in MSFS, so these things help with that. Plus the upscaling algorithms between what MSFS uses and how Nvidia and AMD do it are all different - one isn’t clearly ‘better’ but worth comparing for taste.