OVR Settings plugin for XP11 and the Rift/Rift S

Somehow this slipped under my radar. It makes the VR experience in X-Plane a lot smoother because it allows you to use ASW mode, which normally doesn’t play well with X-Plane. I forced it into the 30fps mode, and it was pretty amazing on my system…pretty much silky smooth. 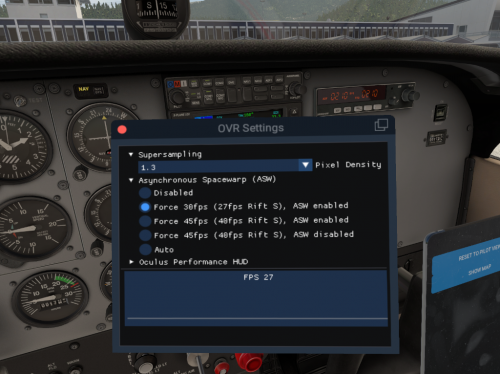 With this Lua script you can easily set Supersampling and Asynchronous Spacewarp (ASW) for the Oculus Rift within X-Plane, including a new ASW Force 30fps mode. Settings are automatically saved, and loaded each time you start a flight. Installation:...

I bet you guys with the Rift/Rift S have been using it for ages!

Probably works well with something like X-Plane which is less twitchy than DCS or a combat flight sim. I’ve generally found 28-30 FPS to be fine for most civil flight sims. Over a long session though…I wonder if it has consequences in VR (headaches or fatigue)…

I think the 30fps is what is presented to ASW. It then does it’s magic and sends a much higher frame rate to your eyes. It was much smoother using this plugin…

I could understand 30 FPS being 1/3 of the 90Hz refresh of the Rift. But for the 80Hz Rift S? Since regular ASW interpolate every other frame, and in this case every third frame, shouldn’t the Rift S do the same? I mean, can ASW interpolate fractions of a frame?

To be honest I don’t know, but it seems to work pretty well for me.

I like to quote Forrest Gump sometimes. “I am not a smart man.” I can relate. Oh, but first: Thank you, @PaulRix! I didn’t use the plug-in because I am scared of adding anything unless I absolutely need it. I’ve been using the “Debug” tool for all of my ASW disabling needs. (And with X-Plane those needs were there). Your post inspired a little searching which led me to “OculusDebugToolCLI” which is in the same folder. The command line interface offers more flexibility than the GUI tool and the line “server:asw.Clock30” results in ASW On @ 30 frames.

I works great so far. And it seems to be far smoother than 30fps even under my moderate load of Quatam River with overcast. The performance is worth a guarded “wow!”. But here’s the real wow. It changes the frequency of the “rotor pass” (like Forrest, I don’t know what to call it. See arrow). With ASW45 or Auto, the “rotor pass” swings in view at a 50% faster rate than 30. Meaning that the rotor visuals are not just a bit of animation. It really is spinning a ~300 rpm! Some of you will say, “well of course it was!” But I am a cynic. I just did not think we were enjoying this level of sophistication. 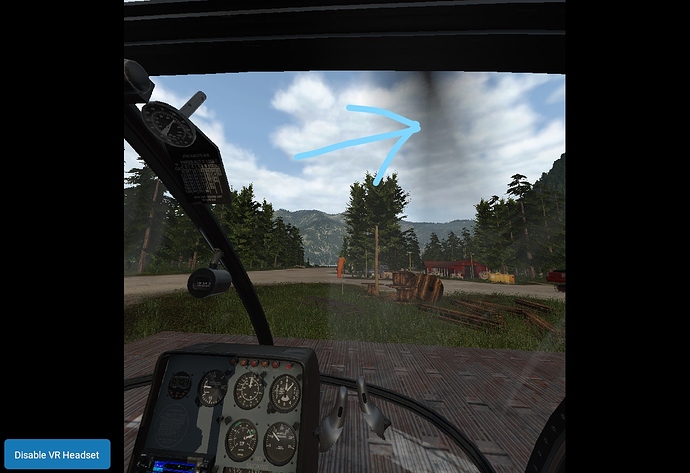 Great! I’m glad that the results I had can be confirmed, even though you used a different method to achieve the same thing. It’s not perfect…but definitely a huge improvement over having ASW disabled. Pretty neat with the rotor blades too!

I just flew the Mach Loop in the Just Flight Hawk at 450 Kts… almost as smooth as DCS! This is a game changer.

but it seems to work pretty well

That’s what’s important, in the end of the day…

PFM mate, that’s all we need to know

Thanks for the heads up! I just made sure 30fps ASW is available in my trusty Oculus Tray Tool 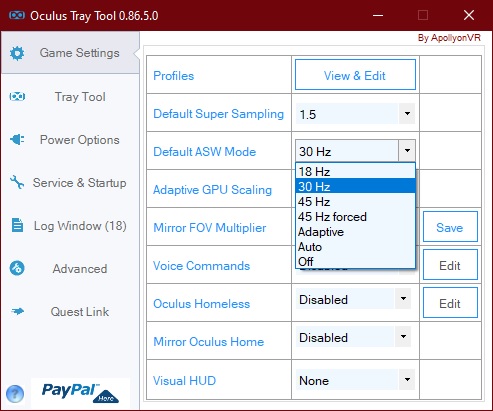 That’s great… so we now have three ways to fix the ASW to 30 fps/Hz. I’m kicking myself that I didn’t find this before.

I tried it over the one spot in the sim that almost always brings me to my knees: Boeing Field. With ASW ON, unflyable as always. With ASW ON/45, better but stuttery. With ASW OFF (my normal way to roll), pretty good, lowish but flyable frames. ASW ON/Clock 30, smooth from takeoff to tours around the needle to landing. Only a handful of micro-stutters. All flown with a PD multiplier of 1.2. There was, on occasion, some minor tearing on the edge of the HMD when moving my head rapidly. My brain tells me that something is slightly different. Maybe a millisecond of latency? I can’t put a finger on it but it is not bothersome even after flying for an hour. Could be placebo. One clear negative is the shimmering that can be see when watching things that have high relative movement by a fixed frame–like the side window, when you watch the terrain below zip by. The textures have a bit of shimmering until they get fully resolved an inch or so past the frame. It’s similar to what happens as people move during a Skype or Zoom call and it is only noticeable during heavy loads. Overall, I think it’s a keeper.

almost as smooth as DCS!

I need to know your DCS settings, please! Because in ANY mode, X-Plane has always run much smoother than DCS for me. Of course, your card has quite a bit more horsepower than my GTX-1080.

@smokinhole Run this mod and it will change your VR life. I run PD @ 1.0 and MSAA 4x. Rift S stays locked at 40 when down low and 80 up high. Also it appears Vsync plays some nasty games with ASW so disable that.

Thanks Gunny! It says that it won’t pass integrity check on servers that use it. How do you get around that?

If you search through that post, there is a IC compliant version. Basically you can modify to pass IC by deleting a few files. Let me see if I can find it. I’d try it in singleplayer to see if its even worth your time or not, but for me the mod makes a massive difference.

This looks interesting! https://forums.eagle.ru/showthread.php?t=215373 Short summary Talented modder alters shaders (self-contained programs that run on graphics card) to tune DCS for a VR display performance. Slightly longer: Main change is only rendering a circular FOV instead of the rectangular window that is rendered in unmodded DCS. You don’t see the edges of the screen in your goggles anyways. Also some small optimizations to shadows etc to make them a lot more FPS friendly at a small …

Look at the bottom of Frogs post, it shows you the files to delete out of the mod.