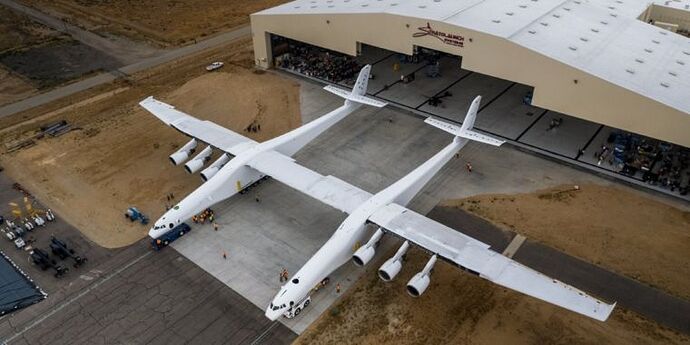 The aircraft has a 385-foot wingspan and is powered by six Pratt & Whitney engines.

Not sure if this is Hangar Flying or Space, but let’s go for the latter. 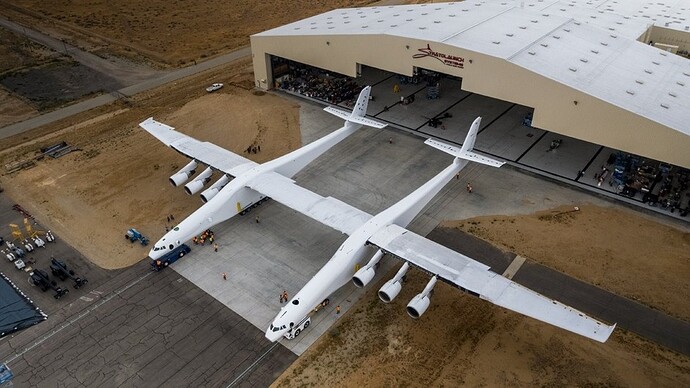 The aircraft has 385-foot wingspan and, powered by six Pratt & Whitney engines used on Boeing 747 aircraft, has a maximum takeoff weight of 1.3 million pounds. The Stratolaunch’s wingspan is the largest in history, blowing away the previous record-holder (Howard Hughes’ Spruce Goose) by 65 feet. Vulcan Aerospace says its Stratolaunch airplane will have an operational range of 2,000 nautical miles. Serving as a reusable first stage for rocket launches, the Stratolaunch system will be capable of delivering payloads to multiple orbits and inclinations in a single mission.

So for saving money/fuel on Stage 1 boosters. It’ll be interesting to see how the economics stack up to something like a SpaceX Falcon 9. Would be fun to fly this big guy in FSX/XP11/P4D etc.

Well that’s cool, they really are rolling along on this project which I find impressive since this is all new build with some off the shelf components.

Hopefully they can sort out what it’s going to launch.

It says about 1000lb in low Earth orbit, so I guess the market is constellations of small telco satellites and whatnot. It seems like Virgin’s, Vulcan’s and SpaceX’s similar plans is to be a next-gen ISP, somehow using very small satellites in LEO for coverage.

Why do I feel like it should have another bracing strut between the tails? (Answer: Because you’re not an engineer…)

Plus it would get burnt by the rocket when it goes off?

Plus it would get burnt by the rocket when it goes off?

Can’t they wrap it in Reynolds Wrap?

With 100,000 new satellites in orbit they might need to one day anyway

How much does Allen’s plane cost? I can’t even imagine…

It looks like it is built under contract from Scaled Composites (looks pretty similar to White Knight in terms of a Burt Rutan ethos):

A long time ago they said about $300 million, so my guess is probably a cool $1b by now.

Why do I feel like it should have another bracing strut between the tails?

Glad I’m not the only one that thought that lol

I wonder at which altitude that thing will fly.
I was kinda underwhelmed by the White Knight in that regard. Carrying the Space Ship 2 it ascended only to 45,000ft or so, but IMO something around 60,000ft is a must to get the space ship into an altitude where it can properly perform. I’d try to reach 70,000 or so.

Going as high and fast as possible must be the goal for the launching aircraft. Air breathing engines are SO much more efficient as rockets down here (by a factor of 1000 or so IIRC).

But for that you need fighter-like performance (or a U2). Carrying cargo to that height, probably not that easy.

The U-2 approach is the better one here, I think (efficiency-wise).
Long wingspan and a lot of engine power does look like a good start.

The 747 or A380 have ceilings of ~45.000ft, and that’s because they are optimized for the peak efficiency speed (around Mach 0.82), a certain size and takeoff distance (fitting airports), and a certain flight envelope in case of engine failure they are using that altitude just above the tropopause.

I think Breguet’s formula can be used to do some of the math of it. I read about that a looong time ago.

So actually even those heavy birds could go higher with their engines, especially if not carrying too much weight, going slower, and using airports with bigger runways available. They are just not optimized for it because of usability reasons.
Allen’s plane looks like a high altitude flyer though. Slow (much slower than an airliner) but I am pretty sure it can carry quite a payload a lot higher up.

Why do I feel like it should have another bracing strut between the tails? (Answer: Because you’re not an engineer…)

Glad I’m not the only one that thought that lol

No, that’s actually really valid- vibrations and harmonics are pretty big challenges when you’re designing an aerostructure, especially the super-gucci composite stuff that Scaled / Virgin Galactic likes to use.

Considering the scale and mission profile of the beast, I’m sure a lot of long hours were spent working out how to prevent those separate fuselages and tail sections from wrecking the connecting part of the wing with fatigue and torque.

I suppose too that maybe those tails are supposed to flex some (particularly when you drop tens of thousands of pounds instantly)…any kind of cross strut would impart its own forces I suppose on the tails (unless the strut itself had some flex capability designed in). No doubt, the engineers must have really worked out the right stuff for that thing. I’d love to see a blow up of the construction of that wing spar…

Right- the tails probably need to flex, but the way you get to that point and what happens afterwards is important.

If the tail sections are physically connected they need to more or less move together- you have two joints constraining movement. With the tails free, each tail can bounce around according to the whims of aerodynamics.

Like @fearlessfrog says below, Scaled’s done this stuff before- composites are complicated but really versatile materials, and I’m sure they’ve got all sorts of ideas on how to keep both fuselages’ dynamic responses relatively tame. These could be as simple as “Well, composites are strong, composites are light, we’ll just beef up the structure and make the parts we need stiff as a board,” or they might be as complicated as magically making the plane’s aerodynamics, structural response, and controls all work elegantly in concert together. (Gorgeous, right?)

What makes the stratolaunch really cool is that the sucker’s BIG. The laws of physics and materials dictate that long, thin structures have a tendency to be like a wet spaghetti noodle*. When planes get bigger these problems become harder to solve, and tend to generate more side-effects. The fact they’ve been able to take that experience with smaller planes and scale it up as much as they have is pretty damn impressive!

If you look back through Scaled Composite’s other large designs, then it seems to be a recurring theme not to have tied tails. They probably have a lot of data on it, so scaling it up even bigger seems to be the trick. Global Flyer looks pretty similar in layout: 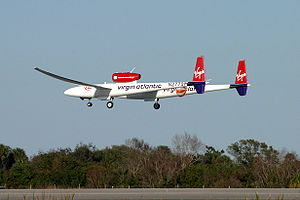 The Scaled Composites Model 311 Virgin Atlantic GlobalFlyer (registered N277SF) is an aircraft designed by Burt Rutan in which Steve Fossett first flew a solo nonstop airplane flight around the world in slightly more than 67 hours (2 days 19 hours). The flight speed of 551 km/h set the world record for the fastest nonstop non-refueled circumnavigation, beating the mark set by the previous Rutan-designed Voyager aircraft at 9 days 3 minutes and a top speed of 196 km/h. The aircraft was owned by t...

With the tails free, each tail can bounce around according to the whims of aerodynamics.

I think the twin tail thing came mind with regards to the Adams aircraft…obviously much smaller and a unique tail arrangement that wouldn’t work with the scale of Allen’s plane.

There’s probably a good reason for it, but i don’t understand the twin fuselage paradigm at all in this context. Is it for ground stability’s sake?

Just think of it as a giant version of White Knight

It’s to leave space for the payload to be slung under it. (Unless I’m misunderstanding you)