So after buying my last PC in 2009, a Dell XPS, I have decided and saved enough to build my first PC.

any who here is what i have planned 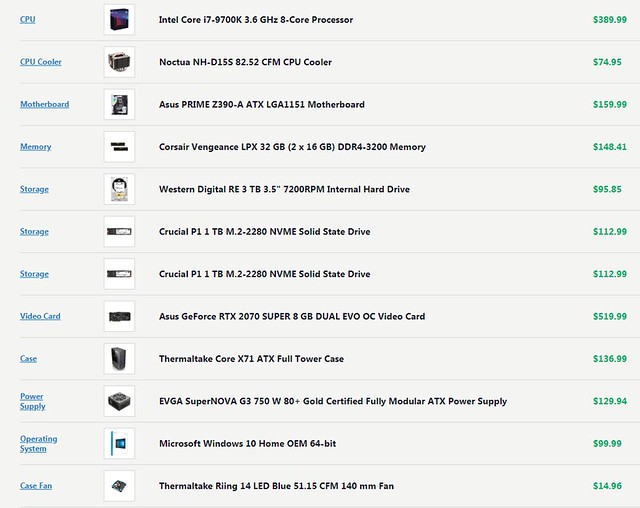 Anyway i have a budget of $2000ish and I am really looking to be able to run DCS and X Plane 11 comfortably. VR is a future thought right now also.

Any pointers or suggestion would be greatly appreciated.

Seems to be a nice rig.

That’s pretty similar to my setup (same board, RAM, and graphics card but different processor, I have an i5) and mine runs pretty good so far, even in the VR stuff I did.
I think it is going to serve you well.

That’s a nice setup. I don’t know your storage requirements, but if you can sacrifice it, I’d go with a 500gb m.2, and a 1tb ssd. Then take the money you saved and get a 2080 super. Then you would just about have the most powerful gaming pc available. SSDs are relatively cheap so if you need more space a few months from now you could add another.

Lastly, the new intel chips are a few months away, you might be better served to buy everything but the mobo and cpu until the 10th gen drops. This will probably lower the 9th gen stuff a little, or you may decide to grab the 1070k or whatever they will call it.

Good luck and have fun building that monster.

That’s a very nice build. One thing to check is that the Noctua cooler will not conflict with the memory dimms - from experience you should be fine as long as there are no cooling vanes projecting above them. I had this issue in a previous build.

On a related issue, has MS officially announced any specs for MSFS 2020?

Sadly not.
We can make some guesses based on the people who got Alpha access but that’s it.
I expect the specs (non-VR, because not supported it seems) to be comparable to DCS with VR.

I thought it might be too early yet. My current rig runs DCS with VR well enough. We shall see.

Well, to be fair it probably is too early to tell.
For all we know the FS2020 alpha might run like crap for everyone even on high end systems, and it might get either better (optimizations) or worse (missing features added and they cost performance) on release.

Skip the HDD and go with NVMe and SSD only. Add more SSD later if needed, it‘s easy to do.

HDD just feel super bad once you get used to NVMe. Make sure you have good backup, so stick those HDD into a nice small Synology NAS instead.

Well more than enough, even with programs.

VR takes everything and no prisoners. You plan to do VR, right? I predict resolutions will get even higher soon.

It really depends on what resolution you plan on gaming with. If it’s 1080p, the 2070 will be more than capable. If you are running 4K or VR you will see large improvement with the 2080.

Also depends on your personal visual quality preferences. 2070 will be able to handle VR just fine in games if you turn the settings down.

Nice rig.
Consider water cooling. I use a Corsair H150i. That may be overkill for your CPU unless you overclock to 5ghz, but you could go with a H110i if the H150i is too big for your case.

I think the consensus of this group would likely be get there 2080 and the TH warthog.

That said, for most of us, money is of some concern. That said, I would reccomend going with the 2080. The graphics in these sims are always getting better so the 2080 will give yourself some room for growth. This will be especially important if you are considering VR.

…and that said, if you are getting into DCS jets, a good HOTAS is essentially…umm… essential.
(unless you go “Cut the Cord” like @smokinhole promotes)

There are other, good albeit non-authentic, HOTAS to there that are less expensive. Plus, you may be able to find a discounted TM WH on eBay.

I have been for the last 15 years been using a CM fighter stick and pro throttle set up. They still work but it’s time to upgrade to a dual throttle.

I think I’ll go with the x56 for its twist stick so I dont have to move my wheels pedals to put in rudder pedals all the time.