I’m having an issue where my G2 sound reverts from the headset to my speakers after a few minutes of gameplay. Unfortunately once this happens my only option is to restart the game I’m running to fix the sound, which ultimately reverts back to speaker again.

I’ve tried several trouble shooting fixes but nothing has worked to date:

I’m starting to wonder if it could be my cable but it seems to be seated properly. Still, I’m not ruling it out at this point.

While the sound switch does not kill my simming experience, it does impact the immersion.

Any help, tips, advice are welcome…
Thanks,

If its always when turning your head further away then a logical suspect might be the cable.
Perhaps play causes problems?

I was leaning heavily on the cable being the problem, so I checked and reconnected it then tried a few experiments with head movement. I continue to have the sound issue but cannot directly link it to my cable.

While I was playing around with P3D, I noticed that sound was coming through the headset and speakers, simultaneously, as well as swapping back and forth. I noticed some settings were set to auto or default, so I switched them specifically for the headset. That seemed to have rectified the problem.

Played around with DCS and did the same thing. The sound ultimately swapped back to the speakers but I was able to switch it in the software by selecting a different output, then switching back. Still frustrated!

I’m starting to think that I may have some rogue or remnant drivers causing the sound to keep swapping. I did have a ButtKicker driver that allows multiple sound streams installed at some point but uninstalled it.

I’m ruling out the cable, for now, and taking another look at possible driver conflicts.

So, my next task is to figure out how to find old drivers and completely uninstall them. I also noticed that Windows is showing some THX drivers, that may have gotten installed with one of my Razer gaming headsets (at least that’s my best guess). Too many audio devices/drivers perhaps???

THX should not be a driver, THX is actually a Standard set by Lucas Arts. So basically THX means if your equipment is THX certified it will play at a reference level which is pretty loud but will not sound crappy like with inferior equipment,…

Does the THX driver show up in your Add remove programs? Usually the audio is switched when and if you have it set too switch in SteamVR. I am unsure why it switches at certain degrees of your head turned and after some minutes.

Have you checked in the Sound Playback settings page and see which device is at default and does it change in there to a different device?

This seems like the problems I had, before getting a powered PCI USB card. Is your PCI USB card connected to the PSU?

It is inserted into a PCI 3.0X1 slot in the mobo, but no power connection from the PSU. So, the short answer is no… but it is my understanding the card should be receiving power from the board through the PCI slot. Is that correct? If so, could it be possible that it simply isn’t receiving enough power?

I had the set connected to a powered USB hub but switched to the PCI card after experiencing some issues with the HUB. We had a major power spike that seemed to affect the headset but not my other devices. After the event, the headset was no longer recognized through the hub. ???

Interestingly, the USB-C on the mobo never played nice with the headset. I understand that other owners of my particular MSI board experienced similar issues. Some have recommended updating my BIOS, but I’m not quite comfortable with that because I read you can brick your system if you mess up the process.

The USB issues that many G2 users are experiencing seems to be because of not enough power. My very simple PCI USB card has a molex connector that gets power from the PSU and that fixed my problems.
Also, BIOS updates are much easier to do these days. Sure, a sudden power outage when updating can cause problems, but most modern motherboards have solutions for such events. I’ll look up the manual of your motherboard…

Thanks, I’ll definitely give it a go and certainly look into a PCI card with molex connector. Much of what I’m reading seems to suggest that the G2 is indeed a power-hungry headset.

So, I checked the connection of the cable then did some other trials and have ruled it out. The sound did swap while I was looking directly ahead and other times, with minimum head movement.

I’m leaning towards driver overlap (if that is a thing) or driver conflicts. I’m going to try a suggestion of sending the audio to my Razer and see if the problem persists. Some users have suggested it as a workaround. I’m guessing if it works then the issue might be power draw (as @Troll suggested) or maybe even a defect in the cable. That’s my logic, at the moment…

trevor610, Are you using SteamVR? If so you can set the audio device to use when you run SteamVR and the proper Audio device to run when starting up the G2. 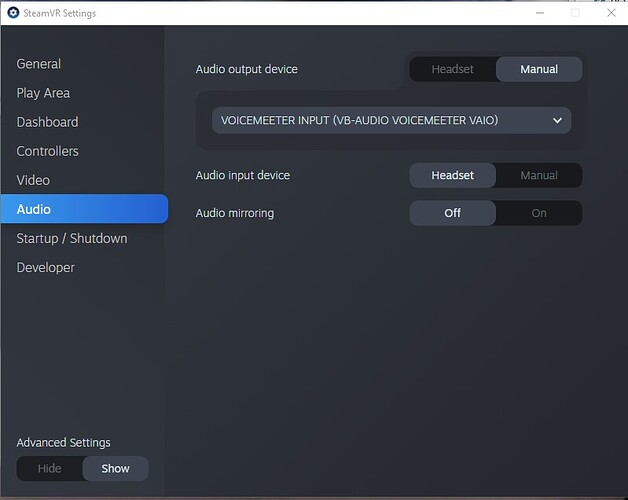 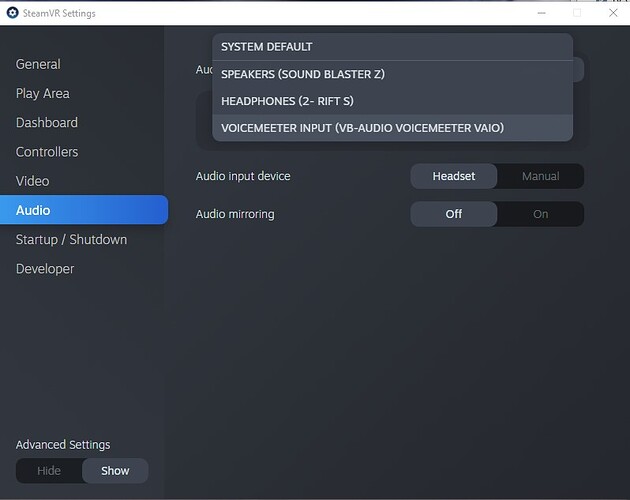 Yessir, I’ve done that. I’ve even set it in DCS but the issue persisted. Last night, I tried a suggestion of sending the sound to my headphones. I did two flights without the issue occurring. I have to run more tests, but the results have me thinking

Personally, playing with my headphones and the G2 was not the most comfortable experience, so I rather not.

I’ve read several comments suggesting that the Realtek audio driver might be the culprit. What’s frustrating is the fact that some solutions work for some but not others. The joys of having so many diverse system configurations…

Leaning towards getting a powered PCI-E card (at least the prices are reasonable).

Posting a quick update… After scouring multiple online resources and forums, I came across the following post on a FB G2 user group:

This is larger and has a power switch, and ‘should’ resolve your issue

Also, as has been recommended already, ensure that you are running the latest BIOS for your motherboard" 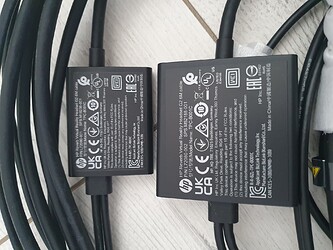 So, today I contacted HP Support via online chat and the company will be sending me a replacement in a few days. Hopefully, this will resolve my issues. It seems to have been the key solution for others.

I’ll update, once I receive, install, and test the new cable.

Well I sure do hope it works out for you. 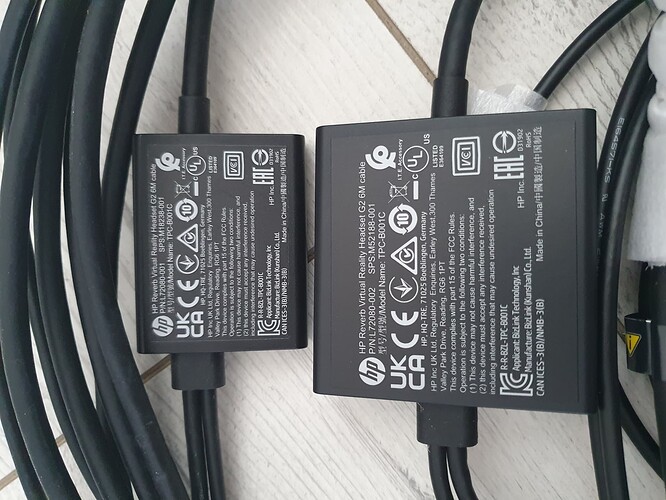 Thanks for the update and for sharing the solution!

I am very lucky I guess: my new Reverb G2 has the right model already, straight from the box. I guess that is why I did not have this issue yesterday. I am getting more and more impatient for the WidmoVR lenses to arrive so I can use it when I’m not wearing contact lenses…

Cool. Best of luck with your lenses. I enjoy mine because playing with my glasses on was not a great experience for various reasons.

Superb tip. I have the initial cable still. I am going to try to get them to send me the revision.

No prob… HP sent the replacement next-day delivery… pleasantly surprised. So far everything is working well. I tested P3D, which has been most challenging in VR, then DCS. I’ve noticed that the head tracking is much more stable, especially in P3D. The sound issues seem to be resolved (I hope I’m not jinxing myself) as well.

Interestingly, I had to revert back to using the USB-C adapter (minor gripe) because the new cable isn’t being recognized by the USB-C port. I’m not sure what the issue is so I need to do more reading on how USB actually works. The headset also seems to be running slightly hotter. This could be my perception because I’m being more attentive to it.

So, short version, the cable seems to be working and has even added all-around stability.

No problemo. I always think it is a good idea to share in the event there are those who may be experiencing similar issues. This community has also been great, so being able to do my little part is a blessing for me.

Regarding getting the upgraded cable, I say definitely go for it. After more flying, I am definitely convinced that the tracking is greatly improved and much more stable. In the past, after looking around aggressively, my view would glitch, then recenter. On occasion, I would even have to manually recenter it. I honestly thought it was my lighting or “clutter” on my desk that was causing the issue. The issue is now gone and my tracking is noticeably smoother. Also, no more sound issues. Booyah!!!

Oh, one nice little detail about the new cable is that it now has a little on/off switch on the box. Yippee… no more unplugging or having to power off a USB port.

For those who have been following this thread, I would like to say thanks all for the support and advice. This has been and continues to be a great community.

So, final update: The replacement cable has been working so far. One strange thing is having to go back to using the USB-C adapter. It’s strange but a minor detail. My sound issues are gone and I’ve also noticed significant improvements in the head tracking. The new cable also has an on/off switch on the “box,” which is a plus. I say get the replacement even if you are not experiencing issues. The tracking stability, alone, is worth it.