I bought a Rift S the other day to upgrade my CV1 and whilst I’ve had it running fine in the most part, I have experienced a few issues.

Firstly, I had a USB connection issue which was fixed by opting into the latest Beta version of the software, but now when I reboot the PC I get an error message saying that it can’t connect via the display port connector on my 1070ti. I’ve updated the firmware to the latest version but it didn’t fix the issue. Hopefully it’s software related and not hardware at fault? It’s odd how it has been working on and off though…

Has anyone else experienced these issues with the 'S at all?

Welcome @CrashEd. My Rift S is out for delivery today…so…anyway welcome.

Is there a second display port on the 1070Ti that you can use? I have a feeling that there may not be (I was using a 1070 and I seem to remember only 1 display port). I bought a DVI -> Display port adaptor at one point … maybe that will help if all other options come up dry. You have to be careful of that as you need to go from a dual link DVI (I think that is what it is called) in order to keep all the bandwidth/functionality of the Display port but it may be an option if your port is bad. It could also be the cable.

Oh, and check that your drivers are up to date for the 1070ti. I believe (not certain) that some display port features can be upgrade with a firmware change.

Hi, @CrashEd!
I haven’t had these issues with my S.
Check that the cable is seated in the headset. You can pull the face cover off, It’s attached with clips, to get to the contact.

Thanks for the welcome guys.

Yes, it has two display ports, a DVI and an HDMI port. The other display port is taken up by my monitor, but I could try switching them. I’m on the latest Nvidia firmware and driver.

Ah yes, the connector at the HMD end - I’d forgotten about that. I remember that causing be grief on the CV1! I’ll give that a try too.

Thanks guys, will report back…

Some thoughts…my RIFT S came today. This was the outer box. I’m a little bit hazy on these international symbols but I tried to do what it said… 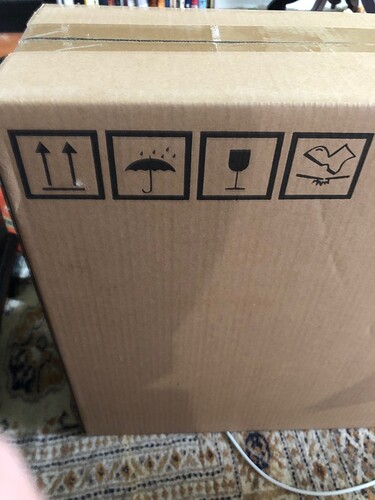 I threw it up into the air, took it out into the rain, had a glass of wine and then stomped on it with a combat boot…and it’s not working so good now…strange…

Repeat the wine drinking until the problem is solved.

Thanks! You see, this is what Mudspike is all about…insightful expert advice!!!

What would I do with out you all?

I’m glad you asked!
A lot of frustrated Rift S users repeated the boot stomping, and that didn’t help.
I guess that it seems natural to repeat the last step, to the common noob. But as any true expert will tell you, you should back up a step, to get the big picture…

Haha, I was ready to put the boot in the other night I can tell you!! Needed some wine to calm me down after that

I’ve had good results from a couple of fingers of Jura. Although there is an increased risk of air sickness…

There are multiple Rift S threads and I didn’t want to add another. So for what it is worth this is my 1st day with the Rift S. As I had hoped, the S is a marked, but certainly not revolutionary, improvement in both visual clarity and performance. I should qualify that claim by excluding DCS. DCS has been something of a performance drag recently, at least with the beta. IL2 on the other hand takes whatever the S brings over CV1 and amplifies it by 11. Today I zoomed around “Berloga” (the airquake server) and had the nicest time I’ve had in months. Not once did I pursue the wrong guy. ID-ing, even from a couple of miles away, was a breeze. I use 3Dmigoto’s essential VR mod which provides 10+ levels of zoom but rarely needed it. The headset is comfy and to my grateful surprise, my SteelSeries headphones fit perfectly. I am not sure that I would want to do any roomscale in that configuration but seated at the joystick it’s ok for an hour or more.

One concern I had was how well the inside out controller tracking would work compared to the sensors. So far no problems. In X-Plane I tried finding a head position that would leave me unable to control cyclic or collective and so far have not managed to loose either controller. Is the S a generational leap in VR? Not really. Is it a step up? For me, yes. So far: Happy, Happy.

Really tempted, now that I have some money to play with.

But there’s two things that keep me from shelling out on it:
A) the way oculus shafted me for adopting early. (no discount or anything on controllers)
B) facebook. Need I say more?

I would have gone for the Index but for the price. For $1000 it needs to be the last headset I buy for a decade.

Yeah, I would have bought an Index if it had the same resolution as the Reverb. IMHO, for that price it should be leader in class in that category at a minimum. Would have purchased a Reverb had it not had so many hardware issues. So still in a holding pattern with my O+, which I finally got to fit with a third party face pad. LOL, VR is still as much art as science.

Welcome to Mudspike…sorry about the late welcome (been traveling)…but this is a great crowd to help you get sorted out. I dunno about watering, throwing, and stomping the Rift-S…but it can’t be any worse than the FaceBook advice that was making the rounds last year to microwave your cell phone if it got wet…

After a week I still love the Rift S, feel that the improvement is substantial and have enjoyed it (mostly) problem-free. There was one instance where I picked it up and the screen was blank. I followed the three progressively deeper fixes and the last, removing the faceplate and resetting the video cable, worked. No issues since.

As was mentioned in another forum, I had a dead headset for a while until I reseated the cables to the faceplate.

VR is not perfect but it’s a hell of a lot better than TrackIR. The “S”, as we have come to call it, may not have the sharpest resolution but it is good enough. I suppose in a couple of years the next gen will arrive. Looking forward to it.

Thanks for the warm welcome BeachAV8R!