VSkyLabs have released their Robinson R66. It looks like I’m going to have quite a shopping list when I get home off my current trip! 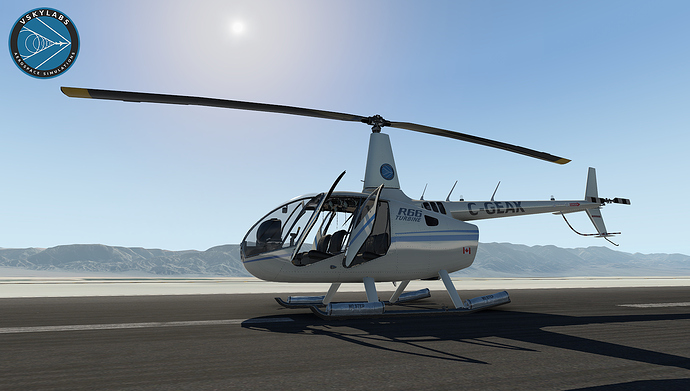 T-bar with VR controls. That should be fun. VSKYLABS is popping ‘em out it pretty quick succession. The mini-500 and the C-47 have both been very satisfying purchases. The Robinson will be hard to resist.

The VSKYLABS R-66 looks and flies nice. I would say that for the price, it lacks some of the sophistication of the B407. VR implementation, cockpit artwork and handling are good. Sounds are a bit meh but that is mostly due the unfair comparison with the 407. I’d say $33 is a tad too much.

I would say that for the price, it lacks some of the sophistication of the B407.

Pls could you be specific.

Again, mainly the sound. Its not bad. Its just not great. Another irritant is how VSKYLABS tend to lowball how internal systems work. They themselves admit that fully fleshed out systems is not their focus. I believe this explains how they are able to release models in such quick succession. An example is engine fire. My first flight I didn’t read anything. I just started and flew. Below the ignition is the fuel cut-off. As part of the preflight I pushed that in thinking that, like some other turbine helicopters, FADEC would introduce fuel at the proper time during start. And that really IS how it appeared to work. The start was totally fine and MGT peaked well below max start temp. After a minute warmup everything was still normal. But no matter how slowly I rolled on throttle, I would get an engine fire. (And btw you can fly all day with this “fire” ongoing.) The proper start is to wait until 15% rpm before introducing fuel with the cutoff. OK fine, they punish the user for doing it wrong. But thats not how this works. A Hot Start is not a fire. And, if you are going to get a hot start, it is going to be during the start cycle itself when fuel ignites with insufficient airflow through the engine, not two minutes later when throttle is rolled on. That’s just one thing and at this early stage in my using the model, the only thing so far. But it shows a certain formulaic of way of making systems behavior match procedures without modeling the systems. This totally works mind you. I just find it less than spectacular.

I don’t wish to be a negative Nelly. I LIKE this helicopter. The interior artwork is topnotch. To me it is not as good as Dreamfoil’s work but much better than the lazy, flat cockpits from, say, STMA. At $20-25 this would be a total winner and I would climb onto my roof and sing her praises. At $33, the R66 is being priced against models that have taken years to develop. I am not on board with the math.

ADD: It autorotates very nicely. There’s plenty of stored energy in the rotor to give you time to nail the touchdown.

Regarding the pricing I am afraid that these days 20-25 is for STMA quality planes, 30-35 is for Carenado quality planes (good art, not that good systems) and 40+ for modules with some systems modeling. With some exceptions.

Not saying that it is OK or not, just as it seems to go these days… I mean I think I see a trend here.

At least VSKYLABS are keeping their modules up to date with XP flight model changes.

That is definitely true. The C-47 has had steady updates for a couple of years. The R66 has had four since its release a few days ago.

Wondering if they modeled it based on some real machine cockpit or they ‘over-modeled’ it slightly.
Googled quickly and didnt find anything even close to that setup.

VSL have chosen to use the XP default G1000 instead of the R66s Garmin dual touch screen unit. 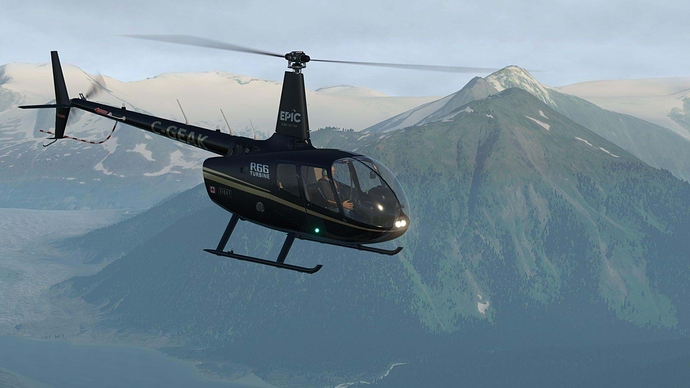 VSKYLABS’ most recent release – and the first of the Robinson family that they are going to produce – has been out for some days and we gave Nick Bates the opportunity to check it out.