I’m now officially in the market for a new gaming rig. My ASUS G20 from 2016 has served me well, but I am now looking to step up to a better PC with a decent sized case to allow for upgrades and lots of cooling.

I used to be a bit of a tech guru, but that was a long time ago (like 20 years!). My last gaming rig, I just bought the best available “Oculus Ready” bundle, which was an ASUS G20. It has been surprisingly good, and I have been happy with it, but you can’t do much in the way of upgrades. I did change out the graphics card (now a GTX1080) and added a 1TB SSD… but that’s about all I can do.

So, I am looking for input on a new rig. It has to be pre-built - the last time I built my own PC (yes, 20 years ago), it wasn’t exactly the most stable machine.

Looking online, I see you can spend a small fortune on a gaming rig these days. I certainly don’t want to spend $4K-5K, but seeing as I am looking to keep my next rig for awhile, I am good with a ballpark of $3K.

What do you guys think I should be looking at? A couple of systems I have found online are: 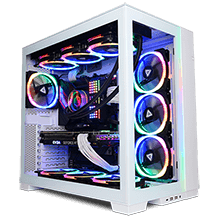 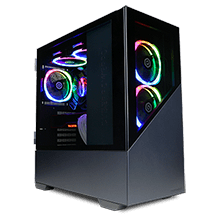 These systems can be tailored,

Is the RTX2080 Ti worth the expense over the 2080 Ti?
Is 32 Gb or RAM worth getting over 16Gb (I’m guessing yes).
Intel i9 vs i7… there are so many variations of Intel CPU’s available these days. My current system has a i7 6700.
Is there something huge just around the corner that is worth waiting for rather than jump in now (I know there is never really a good time to buy tech).

Any insight and advice would be very much appreciated.

ED have stated so far that all the new tech RTX cards bring they wont be putting in - but if you play other games that might use DLSS or very limited Ray Tracing then go for the 2080ti.

Some DCS multiplayer missions do exceed 16GB RAM it seems.

CPU - Probably cant go wrong there with those - how much better over the i7 6700 depends on the games you play - a higher clock speed might be more useful than more cores for some.

Thanks for your advice MB. It used to be simply a case of buying the biggest and baddest (most expensive) rig you could afford. That doesn’t seem to be the case anymore.

My main sims are DCS and X-Plane. VR is a big factor for me too (for use in those sims primarily).

With my current system, I can play with max settings quite comfortably in 2D at 1080p. With VR I have to crank the settings down though, and I am hoping to not need to do that with the new system.

Building a PC is not what it used to be. This is how “hard” it is:

Enjoy a custom built PC without comprises at a reasonable price.

With VR I have to crank the settings down though, and I am hoping to not need to do that with the new system.

I don’t think you’re going to get around that with current hardware. It’s just too demanding to have everything at max.

Watching this thread because I’m interested in the upgrade too. I built a PC once before, and while in the end it did work OK, I did not enjoy the process. I didn’t like the possibility of bending a pin or putting paste on wrong, and my patience with efficient routing of cabling resulted in quite the bird’s nest. I’m the kind of person prebuilds are made for: not a great DIYer, impatient, often doing things in the wrong order, and woefully inept at figuring out how things go together whereas most people would intuitively know how the puzzle pieces fit.

I know it’s not hard, but if things go wrong, it can be not easy too. I can appreciate those with the skill and patience to do it right…for me, I’m glad those type of people work in a factory ready to build me a machine that I will just have to plug in. I’ll pay 15 or 20% more for that luxury and convenience, and I’ll consider it worth it.

Just trying to defend all us prebuilt consumers out there. I know we are hopeless, but we do have our reasons…

One option for a power supply is just get through highest rated one you can find currently. This can future proof you for up to a decade depending on how technology progresses. I had an 8 year span where I was able to stick with the same power supply through multiple rebuilds.

I think you and I are on the same page with this Chris. I am really not the most ‘handy’ person. Usually any time I get the idea that I can build or fix something myself, the process looks something like:

It is much better for me to just jump to step 4 and be done with it, without all the frustration.

It is much better for me to just jump to step 4 and be done with it, without all the frustration.

If that’s the case, that CyberPower 8800 Pro SE is not a bad deal. That Corsair 570x is a beautiful design, and gives you a lot of room to upgrade if wanted/needed. There are some white box components in there like the CPU cooler in order to keep the price down, but I don’r think that you will be upgrading any time soon.with that CPU/GPU combination.

Building a PC is not what it used to be.

I’m with Dan on this. I was amazed at how much easier the process have become since I built my last rig, just four years ago, when I put together my present PC (and took it apart to incorporate it into the SimBox NG build).
But I am well aware of the fact that I find pleasure in building stuff… I just love getting parts, unbox them and put them toghether.

Definitely 32Gb RAM.
i9 vs. i7? Go with the higher frequency.

I don’t think you’re going to get around that with current hardware. It’s just too demanding to have everything at max.

My concern would be that you wouldn’t really see much of a performance gain for the money spent. With a 2080ti some people claim to be setting VR at 45fps with a 5Ghz overclocked CPU - however suspect you still need to fiddle with settings to get rid of stutters.

Also I don’t know what 2080ti type you get with that prebuild so worth finding out - you don’t want to lose its power potential because it has to throttle itself down to heat. The best ones have 2 - 3 big fans on the side or water cooling

Thermal throttling is definitely something I see with my existing rig. The graphics card has a generic layout (1080 Founder’s Edition?), crammed into a fairly tight space.

With the larger, better ventilated case, this should be less of an issue, but I noticed the 2080 Ti “Seahawk” edition is available as an option. With both the CPU and GPU being liquid cooled, and the better case, I would imagine the temperatures would be kept pretty low.

With the larger, better ventilated case, this should be less of an issue, but I noticed the 2080 Ti “Seahawk” edition is available as an option.

I just moved my PC’s components to a Corsair 460x, which is the little brother to the 570x. In both of those models if you get the RGB version, they come with a lighting controller and 3 x Corsair RGB fans in the front, which is typically where the CPU cooler is mounted. There is room and lighting control connectors for three more exhaust RGB 120 fans. For best inside temps, it is recommended to have inlet fans equal exhaust fans. Those 2 cases make it easy to have that setup. One would think that 6 fans would be loud, but not the case since most gaming mobos can control fan speed. They only spool up when needed. Asus mobos come with a calibration utility to make this easy. My gaming rig is very quiet unless I’m in VR or running XP at 4K and in high settings. And even then the fans don’t run at max RPM.

The good news is that my GPU (2080ti) is running on average 20C cooler than my old case. 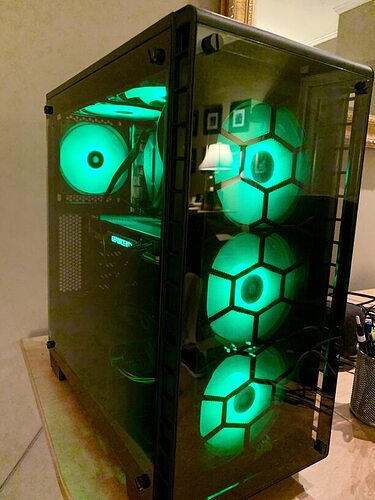 I’ll never buy a pre-made PC again. Putting them together is half the fun. The CPU pin bending (not bending), paste application, etc. is so simple. Everything only goes in one way with one type of connector. If you just don’t have the time or don’t care about building one, just find a setup with 8700k, at least 16gb of RAM, SSD’s, and a 2080ti. I believe the 9700k’s are around the corner though.

This is the config I went with…

Ship date was supposed to be January 16th, but they have a 5% discount if you are in no rush. I took that option as I am due to be on the road at that point next month. The new ship date is only a week later, but it cut off the best part of $200, which is how I justified the Seahawk version of the graphics card.

The only caveat I was going to post is some components on prebuilt rigs can be lesser quality but your spec looks great. Enjoy it👍

That is an impressive setup. Might the old 1080 be for sale when the new kit arrives?

I would, but My wife expressed interest in having her own VR setup for games.