Wow…this looks really cool. I wish I could find some time to play this sim too - looks like a fun event they have going on at SimHQ Motorsports…

This is Mudcat competing in one of the events: 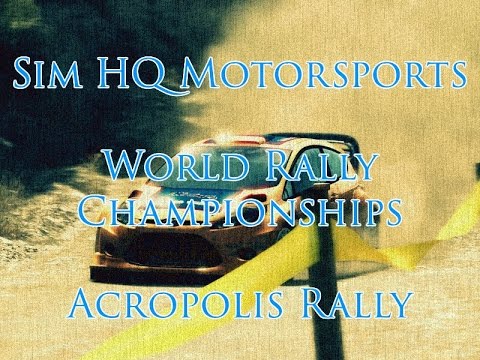 @guod - You driving in those rally events? Looks fun…

Those motorsports guys seem to have a great time.

Just picked up Dirt Rally for the Xbox one. Amazing sim.

And @EinsteinEP They always seem to have a blast!

It’s been a lot of fun, more fun than I was expecting tbh. What I really like is that if you want to take part in races you don’t have to be there at a certain specific time, hope enough people show up, and pray nothing goes on that you have to attend to IRL while the race is happening.

I’m just happy someone else took a look at it

I hope to get the next one uploaded and working in 4k, still haven’t figured out the proper settings for uploading it to youtube in 4k though.

Yes, DR is pretty much the best rally sim since Richard Burns Rally, IMO. Have had it a while on my PC, but it is such a pain to change controllers, that I’ve been waiting for the PS4 version. That arrived Friday, so will give it a go this week. Hopefully, it will stand up to the PC version.

As far a goud and his crew at SimHQ motorsports, if you fall down that rabbit hole, well let’s just say that we’ll see you in a few years. Very addictive that, not to mention the Le Mans type endurance series that they run.

Very addictive that, not to mention the Le Mans type endurance series that they run.

Yeah…those 2.4 hour races were a lot of fun back when I was playing rFactor. I really need to carve out some time to run some laps with those guys.

Does that sim support TrackIR and/or VR devices?
And if yes, is TrackIR useful?

Does that sim support TrackIR and/or VR devices?And if yes, is TrackIR useful?

Yes, Dirt Rally supports TrackIR. While I can’t speak to Dirt Rally specifically, I know that TrackIR helps me out immensely in racing/driving games (rFactor) – looking through corners, clearing lanes for changes, etc.

The value of a good force-feedback wheel cannot be underestimated. I got a hand-me-down from an upstanding gentleman at SimHQ and it makes a significant difference not only in the immersion, but in improving your plan - feeling how the car is reacting to the turn makes it much more intuitive to find the breaking edge and ride it, for example.

Everyone sucks the first time they play. You get better with practice. A wise man once gave me this sage advice: “to drive fast, you have to drive slow.” Just get started, just get around the lap. If you can make it around the circuit once, even while crawling along, you’re doing OK. If you can get around 5 times, you’re doing pretty good. Then you can start picking up the speed.

As for the motion sickness, I personally don’t have any issues with TrackIR, and I’d imagine most people wouldn’t have a problem if they stuck with it for a while. I guess some folks will get disoriented and nauseous no matter what, not sure what to advise you in that case.

Just out of curiosity: What is a “good” FFB wheel that won’t burn through all my DCS money?

It’s basically a how much do you want to spend sort of question, but IMO, the best bang for the buck today is the Logitech G29. Purists won’t agree due to the drive system, but after putting thousands of hours of both a G25 and G27, I know that it will take all the abuse that I can throw at it while providing an adequate sim racing experience. Some will say buy a used G27 and mod it with real racing wheel and flippers or save your money and buy higher quality gear. Good points to be made. For the time that I have for sim racing and what I want to spend, the G29 is the winner. It works with PC and PS4 btw, and supported by Project Cars and Dirt Rally on both platforms.

What is a “good” FFB wheel that won’t burn through all my DCS money?

The folks over at SimHQ Motorsports have some really knowledgeable and friendly people who can talk this topic backwards and forwards. You can start in their hardware forum, but if you’re into racing, be sure to check out the whole site - it’s great!

Does that sim support TrackIR and/or VR devices?And if yes, is TrackIR useful?

I personally haven’t used TrackIR with DiRT Rally, but only because to me TrackIR feels a bit weird in driving games, I move my eyes around far far more than I ever move my head driving. Well driving while moving that is.

I certainly wouldn’t worry about being bad at it, I’m definitely not putting up blistering times in that video, rather slow through most sections as I was just trying to stay on the road. The first to stages of the current rally we’re running are a lot hairier as you pretty much need to gun it as much as possible to even hope to stay competitive.

Oh, one last thought. Your co-driver is calling out the course to you the whole time. So if you just trust what he says you’ll get through and looking anywhere but right infront of you isn’t all the necessary. But has been a great diversion for me while I wait on the P-40, F4U and later F4F in DCS. Don’t tell anyone, but I actually moved my flight sim stuff off the desk for a bit…

If no one minds, maybe I pop together some video’s of the 1st 2 stages of Finland, much faster, jumpier and all around hairy.

If no one minds, maybe I pop together some video’s of the 1st 2 stages of Finland, much faster, jumpier and all around hairy.

But god dammit, those wheels are expensive!
Due to the fact that I am not THAT much into racing sims I am a bit reluctant to spend 450 bucks on one game and a wheel+pedals…
Well, I’ll watch a few more vids and decide then.

Here’s the first stage, the next one is uploading now. If you see the car go out of focus in some angles, it’s a bug currently with the replay, hopefully they fix that one soon. When it comes to the wheels, I too, felt the pain of deciding on one. Just fyi, Thrustmaster has their t150 for $200, from what i could tell from reviews, most seemed rather surprised with how it was for the price, in a good way. I was set to get one, since it is the only thing in the giant hole between $100 and $400, but last second the t300 came up for $300, which is what I originally wanted to spend.

And here’s the 2nd Stage, special thanks to the hazard marker that saved my run near the end So for the SimHQ stats - do you guys just take a screen of the final outcome and post it up…or is there a log? Obviously, you have a video…LOL…but just curious how it works.

Also - in these videos, are you using manual shifting? Looks awesome!

Last question - does Dirt Rally have any split screen multiplayer? This looks like something me and my son would love…but split screen MP is usually hard to find…

So for the SimHQ stats - do you guys just take a screen of the final outcome and post it up…or is there a log? Obviously, you have a video…LOL…but just curious how it works.

Also - in these videos, are you using manual shifting? Looks awesome!

Codemasters has Racenet which deals with the league set ups, restrictions, times and all that, which is nice, everything gets uploaded to the website.

So basically anyone can set up a league easily, or with at least minimal effort, even I managed to do it.

I’m using the old automatic… don’t have a separate shifter, and for now, at least, I found that I’m not so good at using the paddles with all the constant twisting and turning and the wheel set to 900 degrees. I’ve been trying hard not to over do it on the gear, for now.

Here’s the link to the SimHQ league page DIRT - The award winning off-road racing franchise so you can take a look, or join if anyone wants

I did also at least set up one as well, I was planning on doing a rookie league, to kinda ease folks in as well. Just as an additional option, think you join at least 8 different leagues at a time.

DIRT lets you experience the most iconic and extreme off-road vehicles in beautiful locations across the globe.

For modern rally I like semi-auto (paddles) and mapping an e-brake. Once you’ve mastered the Scandinavian flick, using the e-brake in slow, tight turns will shave off a few seconds. Richard Burns Rally had such a great rally school built into the sim. For vintage rally, a 5 speed stick with clutch and e-brake is a blast.