Unlocks 27th October, basically an update to so they can sell it again on PS4/XB1. Free to existing PC owners that bought the DLC or had the complete pack.

Yup, for us of the glorious PC master race it’s got 64 bit and is built on the Fallout 4 engine. So once the modders catch up, we can hopefully load up all of the mods with fewer CTDs and memory issues.

Hmmm. Is this gonna screw with Endereal?

Hmm, not sure. Bethesda did give a bunch of the mod makers early access a while back, so there’s got to be hope I think.

I really don’t need another gaming distraction! Damn you all!

Hey, if this had been a @BeachAV8R post rather than mine we’d all be spending about $500 we don’t have right now.

Hey, if this had been a @BeachAV8R post rather than mine we’d all be spending about $500 we don’t have right now.

Can I fly in Skyrim? (And not a dragon…I’m allergic…)

On the topic of Bethesda. They have decided to stop giving out review copies. This is really bad for us consumers. Bethesda announce withholding review copies as official policy

Not to fuzzed since I’m getting it for free

With so many people getting it for free I’m sure we’ll have some decent reviews soon so you can decide if it’s worth a buy or not.

@BeachAV8R this is skyrim, if you want something someone probably already has it modded in

Not so much about skyrim, but as Bethesda future games. Fallout 4 has been a disaster as a game, but a huge success as selling product. Usually when the publisher withholds a review copy of their product, it means they have a stinker on their hands. Not often that proves to be false.

Fallout 4 has been a disaster as a game

Wow, how so? The usual suspects I trust when it comes to reviews didn’t really gave me that impression…

It’s a looter shooter, not an rpg.

I’d argue that doesn’t make it a disaster, just not the game some people were expecting.

Really? A legacy of very good RPG’s turned into a building sandbox grinding game with shooter elements isn’t a disaster? I beg to differ.

Really? A legacy of very good RPG’s turned into a building sandbox grinding game with shooter elements isn’t a disaster? I beg to differ.

I think disaster is a bit melodramatic given the circumstances. No one lost their lives, no one’s livelihood was destroyed. If you didn’t like the direction Bathesda took the series, disappointment would be more appropriate.

I appreciated the greater effort put into gun-play because shooting in FO3 and NV was duller than dish water. The dialogue and story elements, especially the climax could have been better but c’est la vie. There will be a Fallout 5, hopefully they improves upon those elements. If not, the previous games are on GOG.

As Sargoth said I loved the first two fallouts exactly for RPG reasons first.
But hell if there wasn’t any gunfight it would have been a totaly bore.

Dunno- My definition of Disaster applies to other games as… (Komemiute thinks better of that and does not mention them) Ah, yeah- well ok.

But I can totally see what Sargoth meant.

With number 2 i generally wait that long. You get the game running better and at a cheaper price

Take some wisdom from Fallout 2 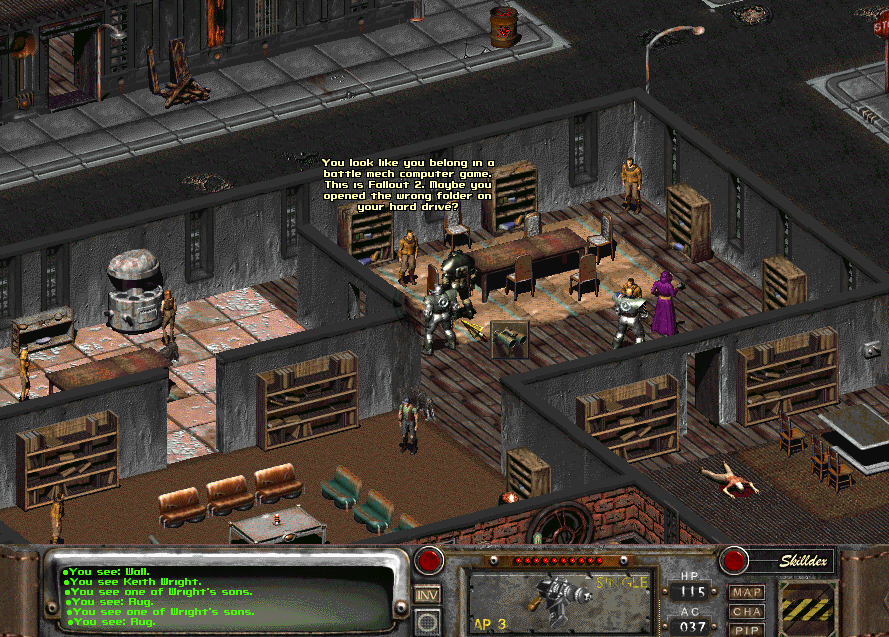 Now I remembered WHY those Fallut were different and the modern one are so much more shooters.
Back then it required EFFORT to complete them.
Now? Time. : /