I ordered this around Christmas, as it was on sale. I’m a bit ashamed to admit it, but I think it was about $160, but can’t remember and am too lazy to look. It took so long to UPS that I actually forgot it was coming. (hmm, this is turning into a sad commentary on consumerism, better move on quick…)

A tiny box. No banana for scale. 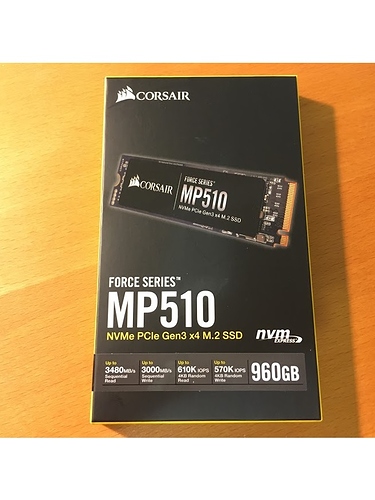 Look at this huge pen!

Ok, time for the tweezers and a practice on Surgeon Simulator VR to put it in. It’s 960GB (a curious amount for those filtering in shops for 1TB) and is not as tardy as the cheaper Intel old stuff, but not as good as the latest EVO sticks. A cost compromise.

The first game will be ‘Find the NVMe holding screw that always gets lost when you open the motherboard box’, as this sucker doesn’t come with one.

I’m now off to clone my boot disk. I may or may not be back, depending if I can reset my password here once I lose my Windows install. Bye all!

If you need it:

The Issue I recently went and bought two WD Black SN750 500GB Nvme drives for the purpose of replacing my C drive and the one hosting my DCS installation. Since 2.5.5 came out, I have been having numerous “micro-pauses” in DCS that last upward of 5-10 seconds (enough to turn a cat launch into a swim). Analyzing my system with the performance monitor up showed that my 32GB of RAM had plenty free, my i9-9900k could take a lot more work before being overburdened, and the SSD for DCS was doing righ…

Ok, so it works. Here’s the benchmarks with using it as a boot drive for Win 10, plus my other standard SATA3 SSD’s for comparison (of various age):

Some thoughts so far:

Here’s with the graphics card out - no room, so lots of sweating, swearing and general fumbling.

So far pretty underwhelming, but it was an ok price for 1TB (860GB in reality really), but I’ll move some apps on it and see.

It’s super irritating that M2 drives don’t come with screws. Like I can’t find the damn box for my mobo (if it even has a second M2 screw) so now I have to either source one or figure it out. Like ffs. They cost enough, just add a damn screw to the box.

@wheelsup_cavu could sure use for you to come over for dinner…

My big CPU fan made it huge pain in the ass to install.

I had the same issue getting to my M.2 slot. Had to take the CPU cooler off and I wasn’t crazy about doing that on a brand new computer. But…it worked…and went back on without breaking anything.

Yes, ‘partion’ was incorrectly spelled, which always inspired confidence of excellence in QA.

I have that too. It reminds me every time I close a program that it has taken something important out of “Focus” for me. I hate it. I just haven’t uninstalled it yet.

Hmm, super unscientific, but DCS feels smoother. It’s nice you can just move it without any registry highjinks - just needed to update the shortcut and start menu bits to the new drive.

That’s a nice Noctua CPU cooler you got there

For cloning hard drive partitions and everything related to it, I have on several occasions and successfully used the linux gui tool gparted. It does not explain every detail, but with a bit of background knowledge it can be very convenient and useful.

Using this and a few other things I pulled off several pretty cool things, including more complicated stuff like fixing boot loader issues, BIOS to UEFI boot conversions, increasing and shrinking partition size, keeping a valid Windows activation in the process, replacing HDD with SSD and so on. Stuff that is usually solved using a sledge hammer and much higher amounts of time.

I can highly recommend gparted and I trust this tool (and linux) a lot more than I trust some commercial offers trying to upsell on every chance they get.

For using gparted I usually download Fedora to a usb thumbdrive, then boot it and install the tool with this command: „sudo dnf install gparted“.

I successfully used Linux based Clonezilla boot media in the past:

Guess I was lucky, then. I put my M2 NVMe drive in a good 3 years after I got the thing, but the M2 slot was along the bottom in between the PCI Express slots. I had to remove the video card but that was all.

I just don’t think I’ll see enough improvement at this point to warrant it. Maybe in 2021 there will be something fast enough to make it worthwhile. I’m still GPU limited in most things I think.