Thought we had one but it seems I was mistaken. Here’s a general thread to discuss and post about Star Wars as a whole.

Try to keep it civil…

This guy on YouTube EC Henry has been doing some amazing renders for Star Wars ships. I love this take on the cannon of the Nebulon B.

I am a heavy contributor to a Star Wars thread on another forum. Might dig up some good stuff.

Oh boy, you sure you want to go down this rabbit hole with me on this forum? Can we also wax poetic on the EU/ Legends canon as well, since there are so many parts of it that are better than what we’ve had forced upon us in the last few years?

Except for Rogue One. That is definitely my favorite of the new films, and second only to Empire Strikes Back overall for me.

Can we also wax poetic on the EU/ Legends canon as well, since there are so many parts of it that are better than what we’ve had forced upon us in the last few years?

I got no issue with going down the EU rabbit hole, in fact… I might encourage it!

My son is called obi…let’s dive right down this hole!! I’m in!

I’ll go ahead and say:
I do kinda like a lot of the new stuff.

Don’t get me wrong, some of it isn’t quite great, but I think people are overly critic of it while at the same time ignoring the huge steaming pile of utter rubbish that was part of the old Expanded Universe, remembering only the pretty good or (rare) excellent stuff.

I love starwars, it’s a big part of my childhood.

Am I the only one wondering if people took the wrong message from it, thinking Darth Vader & the empire were the good guys? Look at this:

That can only be designed and comissioned by people who thought the empire were awesome. It’s a black menacing monster of a building. To me it just radiates evil lol.

12 year old me thought that an indestructible starship being thrown into a black hole in a secret empire base holding a prototype death star and DAALA!! was actually fricking awesome. It still is now I’ve typed that all out

Caravan of Courage was a national treasure! - 5 year old me.

And don’t even get me started on the CGIfest in parts of the Special Editions. That should’ve been a warning to us for the prequels.

The problem with several of the authors early on in the EU period was that they fell into a “Superweapon of the week that this time I SWEAR is new and different and not just another Death Star” writing trope that of course JJ had no problems stealing from. When they weren’t shipping our favorite characters (who seemed to be the only ones who had anything happen to them/ be able to save the day) in what felt like horroble BBS-quality fanfic. The Suncrusher though was absolutely ridiculous I agree, as was a lot of that part of the Jedi Academy trilogy, but it gave me one of my favorite characters in the EU: Tol Sivron.

Having said that, I wish JJ had borrowed much more liberally from Timothy Zahn for the sequels.

Agree. Zahn had some pretty good stuff.
(But then… also not so good stuff)

I didn’t mind the CGIfest special editions as much as others, but yeah, they overdid it in quite a few scenes.

The new movies:
I really really liked Solo and I am sad that people basically boycotted it because they didn’t like TLJ.

And sure, the sequels are not timeless classics aand their quality (especially in writing) is not great. But people seem to be on a crusade, taking criticism to extremes. Nostalgia is one hell of a drug and we can see right now how it is applied to the prequels and original trilogy, making them better, and the new stuff worse than it is in comparison.

The rogue squadron and wraith squadron books were brilliant as well.

My God I wish I could go back and read all the EU books I read as a kid.

You might be surprised how bad some of them actually are.

(At least that is what happened to me)

I wish JJ had borrowed much more liberally from Timothy Zahn for the sequels.

This. Thrawn is such a cool character. He was in the Tie-fighter games as well. Blue skin, red eyes, white uniform. Wonderful villain. 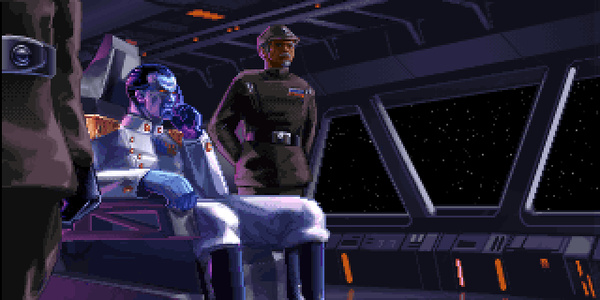 Look at him being all thoughtful and considering the culture of his opponent. Wonderful.

Thrawn was even pretty great in the Rebels animated show (which was a bit hit and miss otherwise).

But people seem to be on a crusade, taking criticism to extremes.

This. It’s a problem with where we are right now with nerddom. TLJ was awful, but in terms of storytelling, writing, plot, logic, and pacing. Not the reasons that are being shouted down from the gatekeepers of our time.

I honestly think that the pacing is the biggest problem.
Stuff just happens too quickly. Many of the scenes would be OK, but not directly one after the other.

And that’s so sad because I see how great the movie could have been, they just rushed it to death and made some very questionable decisions to do so.
That’s why I like to play advocatus diaboli and defend the new movies, I’d love people to see what I see there. Sure, they are not great. I’d argue that they are still OK (there are MUCH worse movies out there) and they are not “killing Star Wars” and unsalvageable.

It bothers me a bit that everyone is a movie critic these days and finding the bad stuff and overreacting in youtube videos and the like is something people seem to think is necessary. And then of course everything has to be “the best thing ever” or “the worst thing ever”. Always extremes. And Obi-Wan says that seeing only the extremes is a thing only Sith do.

And Obi-Wan says that seeing only the extremes is a thing only Sith do.

Like I said, a lot of people seem to think and act like the dark side are the good guys to them