they are not “killing Star Wars” and unsalvageable.

Eh, it doesn’t have to be the worst thing ever to kill any remaining interest you had in something.

Well, sure. If people aren’t very interested (anymore) to begin with then you need something extraordinary to get them into it.
The new Star Wars movies are not extraordinarily good by any stretch of imagination, that goes without saying.

The lack of interest came after, not before. There isn’t much point in explaining however if you still like it, great, if you don’t, I understand.

Give the next one a shot. I think to really judge the new trilogy it has to be complete. (And yes, I do think that the final verdict for most people will be negative. Sad but true).

Fool me once (Force Awakens) shame on you, Fool me twice (TLJ) shame on me. Fool me three times? haha nope. 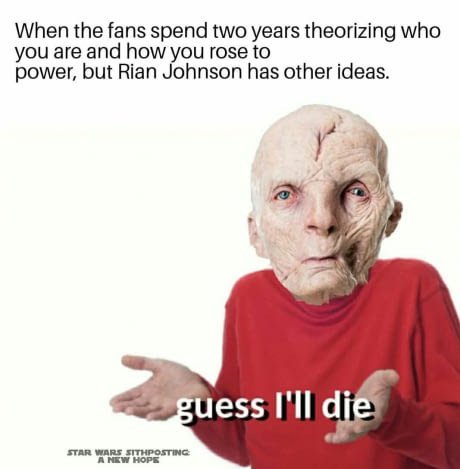 Am I the only one wondering if people took the wrong message from it, thinking Darth Vader & the empire were the good guys?

Wow there’s a throw back! Anyone remember when they actually broadcast the Star Wars Fan Film Awards on TV

My mums friend from work gave her a VHS tape with this on it and i remember being blown away by it. So funny

My enjoyment or lack of enjoyment of something is independent of popular opinions on it.

Lots of people didn’t like anything Star Wars besides, well, the first 2 films. Starting with ROTJ and then the TV stuff in the 80s people were already trashing it for this or that reason. I just don’t care. Then came the special edition haters. Then the prequel haters. Then the sequel haters. Then the animated series haters. All with their own take on why X is fine but Y is bad.

I won’t bother ranking them all, but to me the best SW film was a 9 and the worst a 7 out of 10. That’s as volatile as my opinions get. Time is also irrelevant. I don’t hate a film now and like it later, or like it now and hate it later.

Yet despite their popularity I never really cared about The Hunger Games films, or reality TV, or spectator sports. I seem to be immune to mob mentality. I don’t cheer because others are, I don’t jeer because others do.

When that happens, it smacks of parroting back the opinions of other people. If you don’t like something but are unable to articulate why without contradicting yourself or showing an ignorance of the actual facts, it makes you look like someone who just jumped on the bandwagon without having any independent thoughts of your own.

Saying you didn’t care for the direction or certain plot points in TLJ is perfectly acceptable, regardless of whether someone agrees or not, because it’s a subjective opinion. Saying you hated it without being able to explain why beyond broad “it sucked” statements is just lame. As is the notion that bashing things that are popular = cool.

And of course, the failure of many adults to grasp the notion that was taught in elementary school, that an opinion is not a fact. If it contains words like “best”, “worst”, “good,” or “bad”…it’s an opinion.

I wonder of they will just gloss over that or if Snoke did have a deeper meaning. I guess we will see.

Btw: as much fun as it was/is: I think that people having too strong of an emotional connection to their fan theories being pissed that they didn’t turn out true does contribute to the backlash that TLJ faced.
Maybe they should just have picked a popular fan theory and do that. But then…people would have criticized the plot as being boring and foreseeable.

Fool me once (Force Awakens) shame on you, Fool me twice (TLJ) shame on me. Fool me three times? haha nope.

That’s fair I guess. Maybe there will be some future Star Wars product will pull you back again. So many stories still to tell in the universe.

I only halfway agree with your last point.
Movies can be objectively bad in some ways, but people may not be able to either grasp or explain why it feels bad for them.
For me that’s the case for Rogue One. I liked some things about it, I disliked others, but none of them can explain why I kinda disliked the movie as much as I did. I cannot explain it.

Edit: expectations of course play a huge role. And I think that’s what killed TLJ to a big part. It is a mediocre movie (I’ll give it a six or seven out of ten) but since people expected a brilliant 10/10 movie the contrast made a 7/10 movie feel like a 3/10 for many of them.

Own the ultimate Imperial Star Destroyer!

My wife would divorce my ass so fast if I came home with that…“but it’s for obi!”

I think that’s the cool thing about Star Wars: even when you dislike the sequels, prequels or even the original trilogy (I actually know at least two people who love the prequels but dislike the original trilogy) you can find enough stuff (even newly produced) from your era of choice.
As y’all know I play miniature tabletop games, and there are two Star Wars branded ones that really appeal to me:

I tried an experiment on my kids, would they like the prequels more if those were the ones they saw first, or the original trilogy. Trying to put the nostalgia factor out of the equation for the originals. Turns out they liked the original ones more.

Personally I have always enjoyed the prequels, but was fun at least to see if they’d like them more because those were the first they’d seen of Star Wars.

I’m going to show my kids Star Wars in the “Machete” order.

I just have to try and fit in Rogue One- (sorry) I loved it!

The OT haters I know both watched the prequels first. I always thought that would be the reason. Your experiment shows the opposite, I like that!

I do think that people should watch them in their release order though. Otherwise you spoil the most important points, making the OT movies much worse than they are.

Nooooo!!!
Kids have to see Episode 1, they will enjoy it!
Being too old when watching it makes Ep1 drop. You surely were over 15 when you first saw it. 12 year olds really liked it!
Also: that way you miss the best light saber fight (and battle music) of the whole series!

Edit: Rogue One is not a bad movie. I just personally dont like it as much as the others. Still 7/10 enjoyable IMO.