I need some help creating profiles. I’m just learning the basics. Specifically, I need to figure out to create a profile for some older Jane’s sims that can’t use multiple controllers.

Also, how do you activate a profile once you’ve made one?

PFunk, I hope that those old sims will recognize the combined TM controller, but if so, launching a profile is easy. Once you’ve created and saved it, click once on the profile, followed by the Run button. The GUI will disappear and you’ll see a window showing each controller script loading. 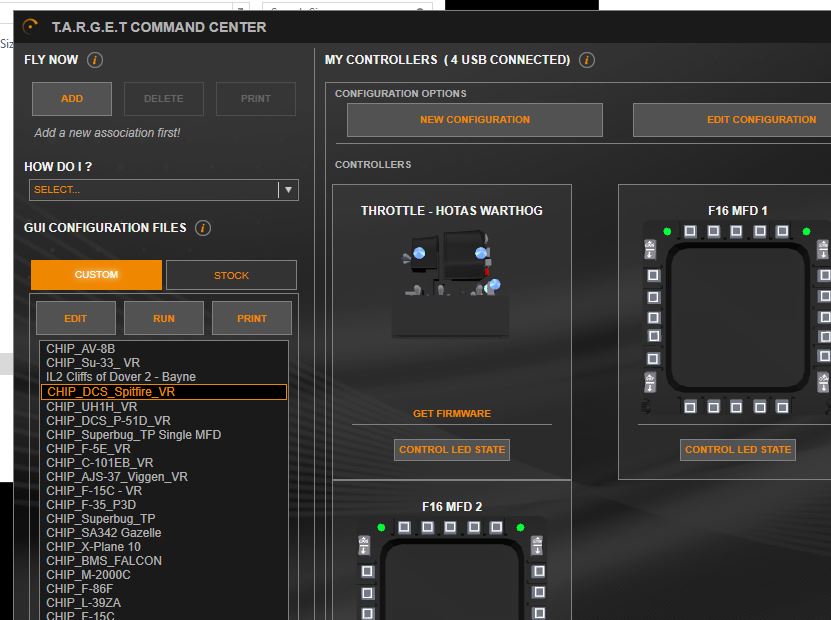 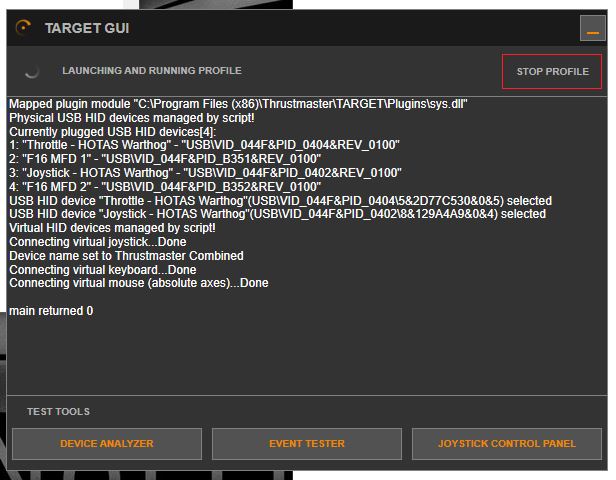 Then launch your sim and navigate to Settings -> Controllers, or whatever the controller configuration page is called, and look for a controller called something like TM WARTHOG Combined or Thrustmaster Combined as in the load status window. Does this help?

The programming language is very similar to C, and the included guide is fairly decent. Talk to @Homefries if you can - he has a very, Bru good handle on the ins and outs of what TARGET can do.

There are 2 ways to create a TARGET profile:

If you just want a single integrated controller with 8 axes and 32 buttons, you can easily do this with the GUI. You can create a generic profile that will work with any old game that recognizes only one controller. However, you can also very easily do this with the Script Editor, and I think the benefit of using the script editor well outweighs the assistance of the GUI.

Problem with the GUI is that it creates a profile that is too cumbersome to import into the script editor (which would otherwise be a logical thought for developing a baseline configuration to tweak). If you’re looking to create a generic 1-controller profile, then make tweaks for each game (i.e. 1 profile for JF-15, another for JF-18), then it’s best to create a generic profile in the Script Editor.

These map your Warthog X and Y axes as you would expect (replace &Joystick with &HCougar for a Cougar).

For buttons, the basic command is:
MapKey(&Joystick, S2, DX2);
which assigns the “pickle” button to button 2

From there, you can map a total of 8 analog axes and 32 DirectX buttons before you hit the Windows limitation of a single controller. At that point, you can start using key emulation for things like MFDs.

If you’re looking for an example of code for an older game, take a look at my Total Air War profile, which was written for a single-controller game, but integrates stick, throttle, rudders, and MFDs. Also, feel free to take a look at my integrated DCS profile for an idea of what you can do with TARGET once you realize that you’re just programming in a nerfed version of C with special libraries. Also of note, Appendix E in the Advanced Configuraion Guide (DCS profile) walks you through creating a desktop shortcut.