The 33 is getting some love! 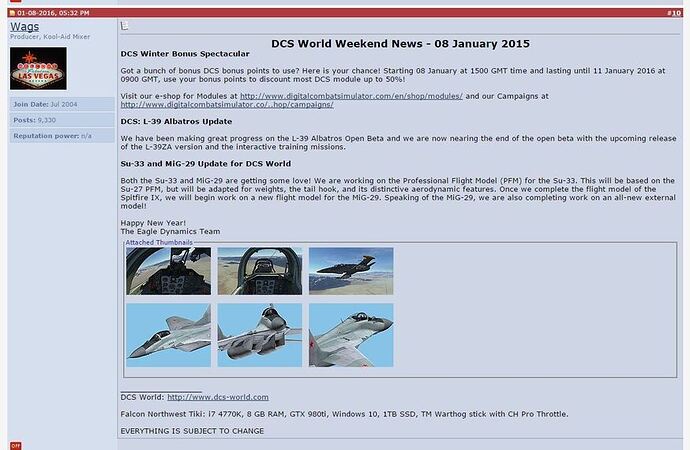 I am sure I will have to learn how to trap onto the carrier all over again!

Can I edit it just to copy/paste the text in rather than the image?

Visit our e-shop for Modules at Modules and our Campaigns at digitalcombatsimulator.co

We have been making great progress on the L-39 Albatros Open Beta and we are now nearing the end of the open beta with the upcoming release of the L-39ZA version and the interactive training missions.

Both the Su-33 and MiG-29 are getting some love! We are working on the Professional Flight Model (PFM) for the Su-33. This will be based on the Su-27 PFM, but will be adapted for weights, the tail hook, and its distinctive aerodynamic features. Once we complete the flight model of the Spitfire IX, we will begin work on a new flight model for the MiG-29. Speaking of the MiG-29, we are also completing work on an all-new external model!

I know Fearless, what the heck am I doing? Who images a post like that? I just figured out I can link to Wags direct post instead of the whole page AFTER I did it. Forum skills polishing practice, and…begin!

I am also very excited for the Mig-29, we have had it all along but it gets very little play time or mission placement. I love the new cockpit now and with a new body and flight model I will be launching R-77’s at everything I can.

No worries, I just didn’t want to edit it without asking, seemed rude. @EinsteinEP has posted it above anyway.

Flaming Cliffs seems to the gift that keeps on giving so far. I too am really looking forward to an updated MiG-29 plus the Su-33 updated flight model. It’s going to make Carrier hops a lot more fun for sure.

I’ll probably be flying the crap out of the Su-33 in single player, still can’t be bothered to fly russkie in multi though.

Also I’m hoping the new MiG model finally fixes the damage model. As it is those Fulcrums are nigh indestructible.

Man…you might never get me out of the Su-33 now… Awesome!

I am excited about that news as well, I just hope they fix the carrier before that, so we can actually land with the PFM plane on it…

I have been hoping for a Su-33 PFM for so long, almost forgot it would ever really be finished. If they fix the Su-33 carrier landing, that is one step closer to the DCS:F/A-18C too

Currently in the Eagle Dynamics update hangar is our Su-33 for DCS World / Flaming Cliffs 3. This carrier-borne aircraft is in the final stages of receiving a big, FREE update that includes much improved flight dynamics and the addition of several new systems. This will bring our Su-33 much more aligned with its real-world counterpart.

Features of this upcoming Su-33 update include:

• Professional Flight Model (PFM)
• More detailed and accurate simulation of the wing control surfaces that include the leading and trailing edge flaps and the differential ailerons. In addition to the conventional differential stabilizers, canard behavior has also been improved for more realistic behavior. The Flight Control System (FCS) will automatically reconfigure itself depending on the flight mode.
• The adaptations that make the Su-33 aircraft carrier-capable have been updated and improved to include the wing-fold mechanism, reinforced landing gear behavior, and the inclusion of high-gain nose wheel steering for use on crowded carrier decks.
• The physical mechanisms by which the arrestor hook engages the aircraft carrier arrestor wire has been greatly improved. Correct physics have been applied to the arrestor wire and its’ interaction with the aircraft.
• The engines now have a “special mode” that adds up to 12,800 kg of thrust (instead of the normal 12,500 kg of thrust). This mode also includes realistic operating time restrictions.
• A new FCS mode used when aerial refueling has also been implemented. When in this mode and the control stick is released, the aircraft will automatically maintain level flight. This FCS mode allows fine-control and thus making it easier to make contact with the tanker within a pitch range of plus or minus 5 degrees and of a roll angle of plus or minus 10 degrees.
• The Auto-Thrust Control (ATC) is used for automatic speed holding and can be fine-tuned with a set speed switch. This can be useful with landing on the carrier.
• The automatic collision avoidance system (“Uvod” mode) is now included and allows safe nap-of-the-earth flying. 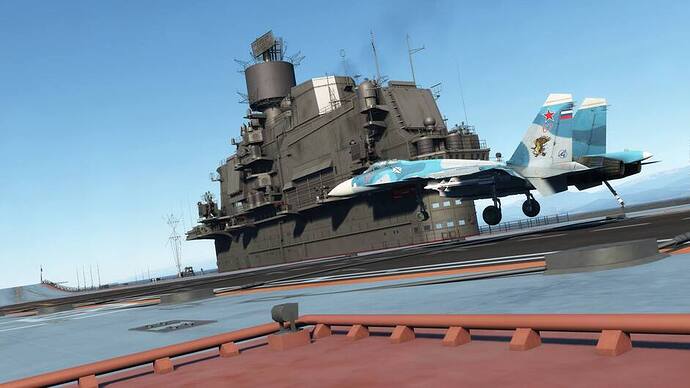 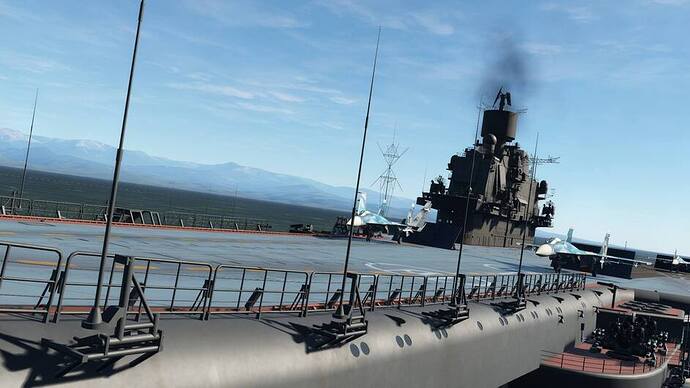 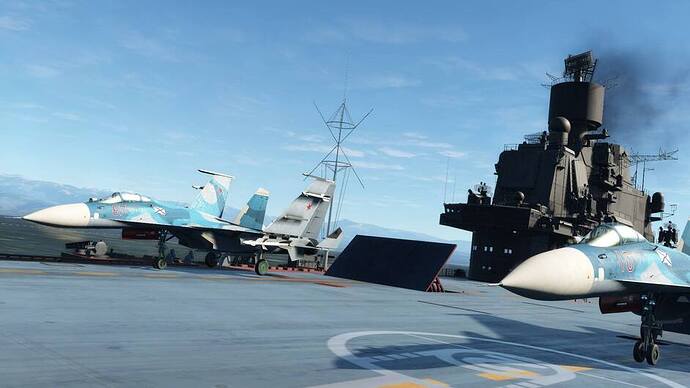 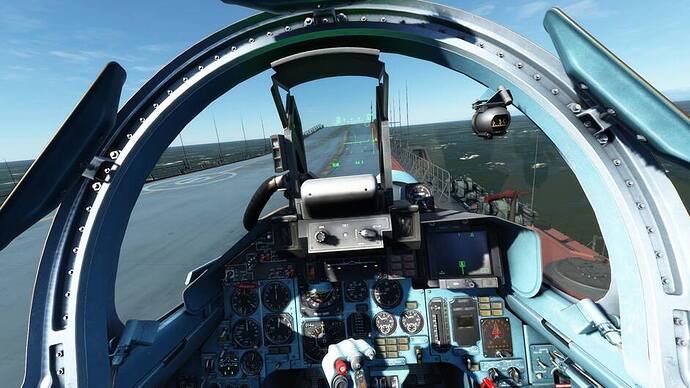 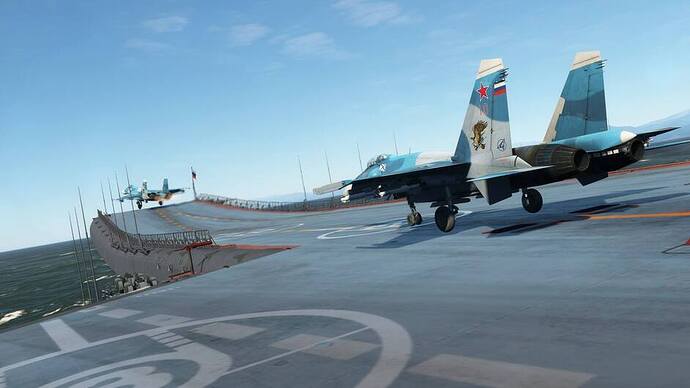 Holy crap I’m gonna have to jump back in to DCS and quick, I love the Su-33!

Wonder if they’ve turned on the FLOLS for the Kuz, might be worth trying a few patterns once it comes out. After that, well, more prey’s the better come Cat and Bug time…

Is it just me, or is the Kuznetsov getting some love there too?

That’s the new model debuted back in the January 2016 Newsletter.

Excessive amounts of CMANO applied directly to the brain have given me some ideas for a mission that’s entirely doable with MOOSE. We’d just need some Su-25UTGs to round out Redfor…

Maybe @BeachAV8R can lobby for it.

Question. Are those antennas on the bow supposed to fold down on the kuz during ops, or do they stay vertical like that?

Are those antennas on the bow supposed to fold down on the kuz during ops, or do they stay vertical like that?

They fold down to lie parallel to the deck.