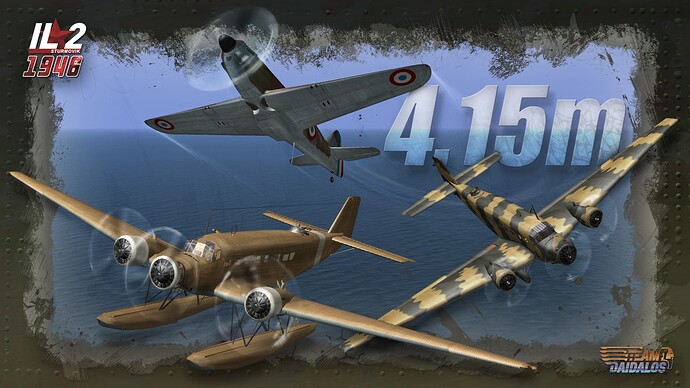 This version 4.15 is not compatible with previous versions when playing online. For compatibility when playing over the network, the server and the game must be the same version.

Attention: Version 4.15 is intended to be installed only on top of the merged version of the simulator (FB+AEP+PF+46) updated to versions 4.14.1.

In order to install this add-on, run the file IL2_415_MULTI.exe and follow the on-screen instructions.

Please note that this add-on is impossible to install over standalone Pacific Fighters.

Daidalos Team would like to thank the beta testers and users who took the time and effort to find and describe some annoying bugs.

Thank you to anyone we may have forgotten!

Thanks to all who involved and assisted!

She’s still getting loved after all these years!

The right kind, too. This just plays so much to why people like '46.

After all, where the hell are you going to fly the D.520? That’s a reason why people stick around in '46; obscure things are flyable. It’s where I get to fly my misunderstood Buffalo, after all.