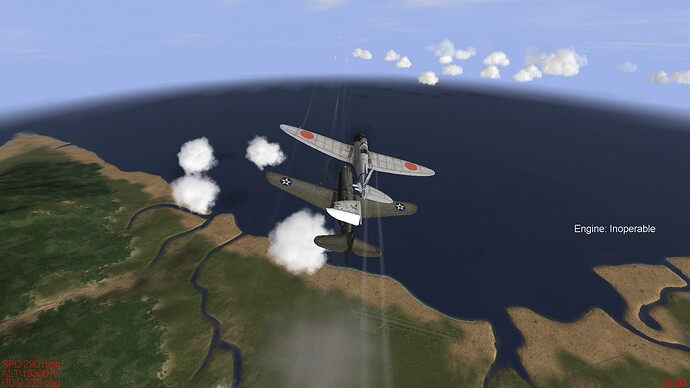 grab05231920×1080 93.2 KB
Something almost always goes wrong when going for that last easy kill. This would have been victory number five.

Would you have made the same mistake Discobot?

This would have been victory number five.

Taran may count but after nearly thirty minutes of flight time making that goof was just a little bit on the frustrating side. Even worse was that when I watched the track again earlier today both the AI pilot and gunner were already dead. I had wondered about just that possibility when all the friendly AI planes broke off their attack.

Had to look the term taran up. I take it you meant the Russian aireal ramming meaning? 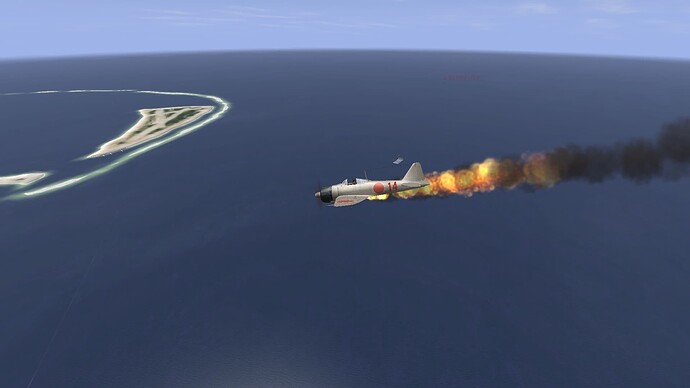 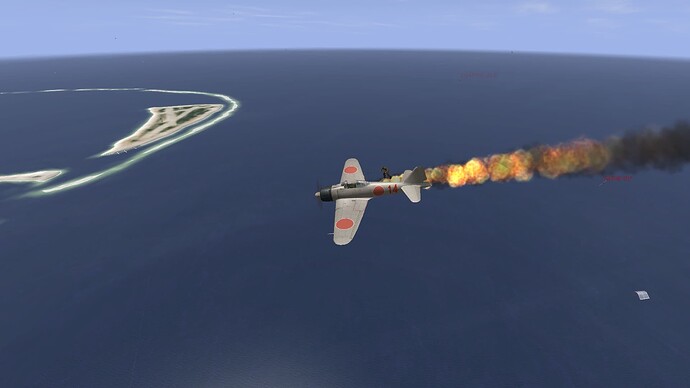 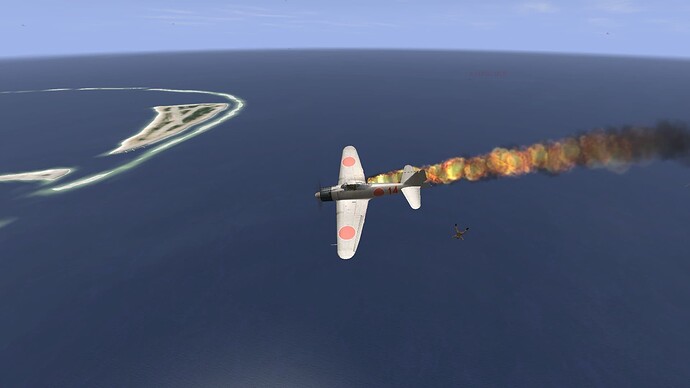 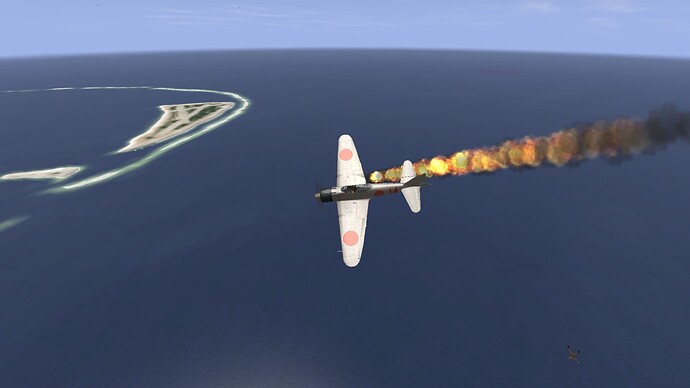 Now the real question is “Did his chute open”??? 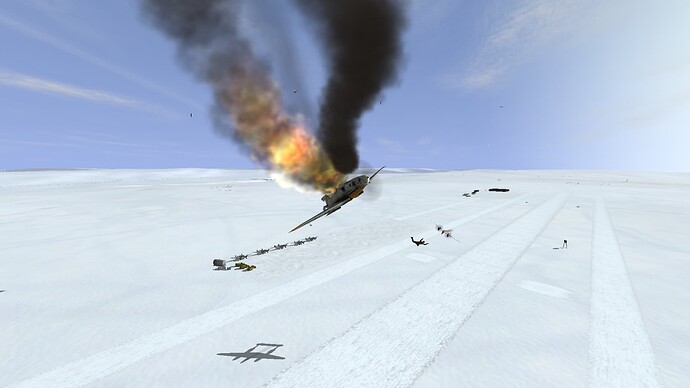 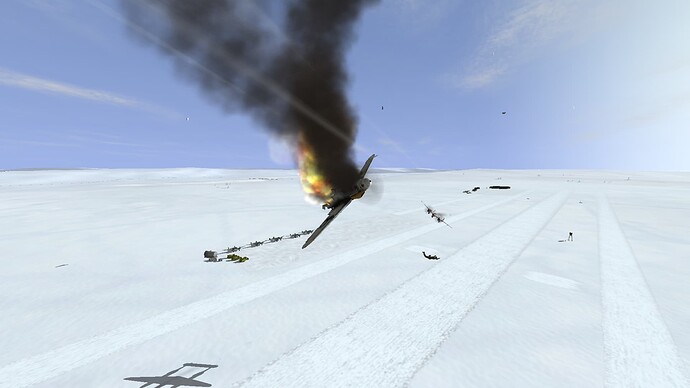 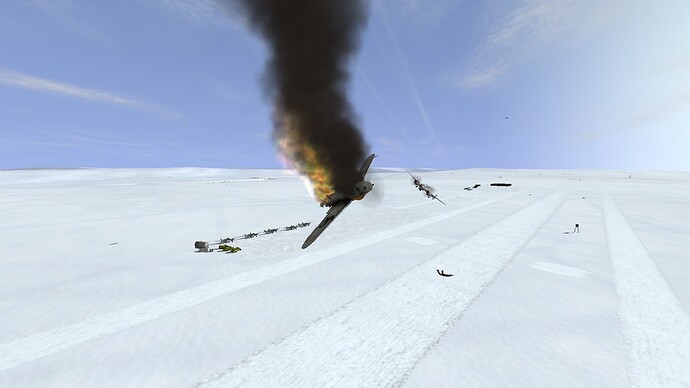 seems like pilot of that Zeke had better chances

found IL2 1946 installed on my notebook so decided to do some quick mission. good sim even after those years. 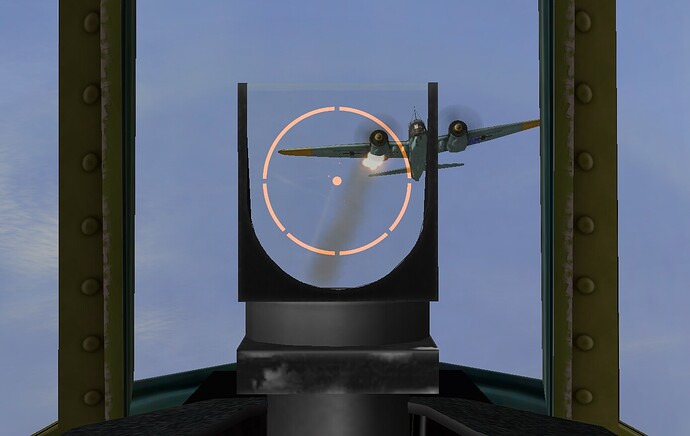 I am still amazed at what people have done using the IL-2 Full Mission Builder over the years. I just started making some Quick Mission Templates for the QMB using the old Burma map and thought I would give M4T’s download area a check to see what others have done with it.

Downloads Delivering the best news and information in IL-2 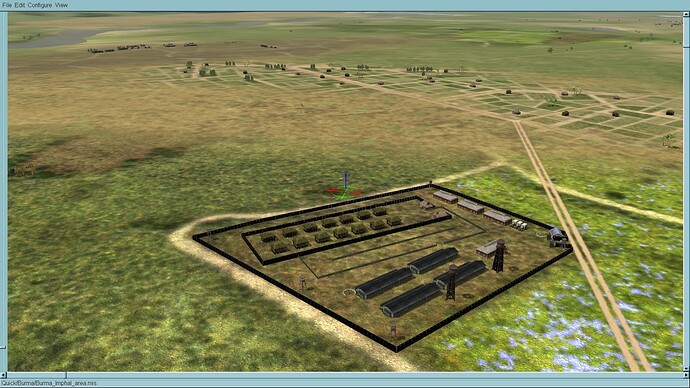 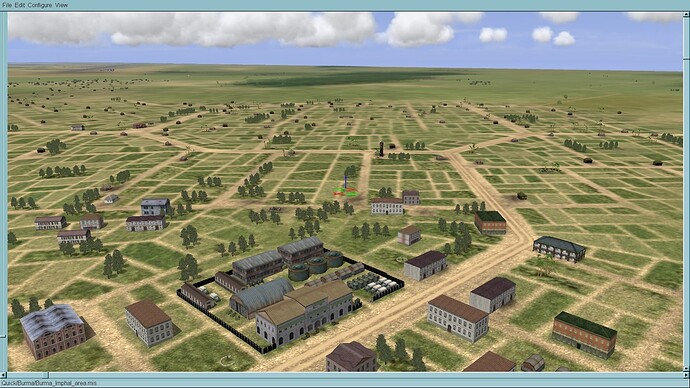 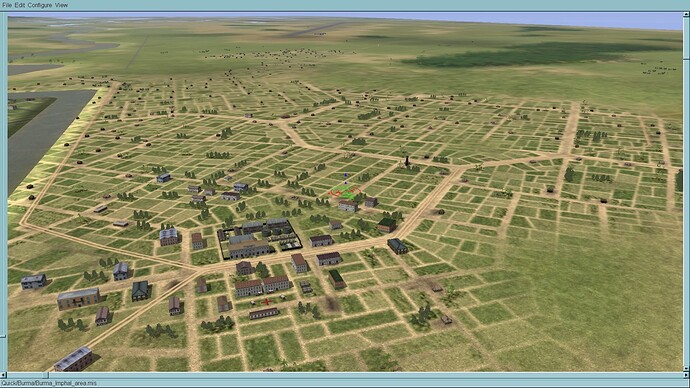 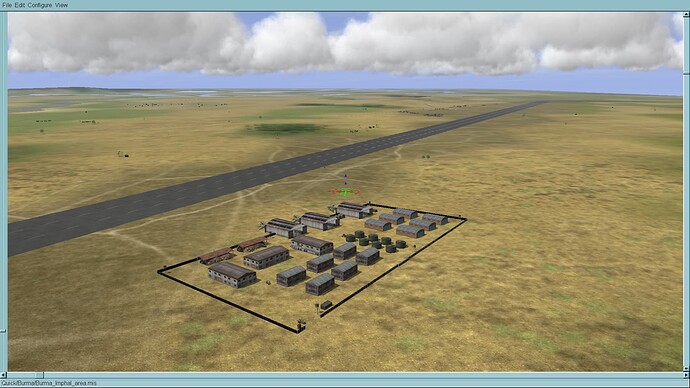 One of my first tests of the QMB Scramble mission. Seems I have attracted a little bit of the enemy AI’s attention! 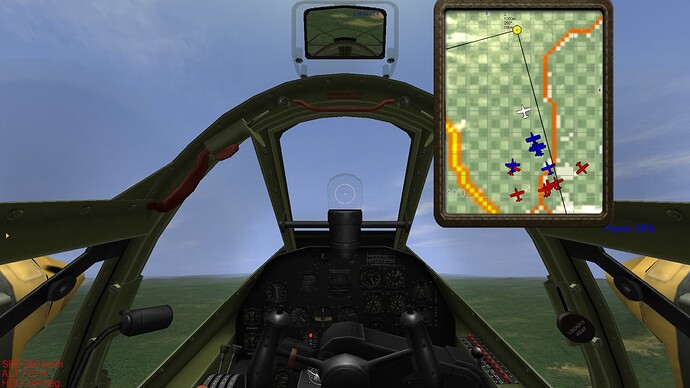 btw do you use the stock 1946 or also the unofficial Daidalos Team patches? or any other mods?

That change in early 2020 from a Yellow forum banner, which led to them being unofficially known as the Banana forums for several years, to a blood Red forum banner on their site is still jarring as heck to me.

btw do you use the stock 1946 or also the unofficial Daidalos Team patches? or any other mods?

I use the HSFX mod patched to v7.03 and I also use the Daidalos Team patches.

Delivering the best news and information in IL-2

I even have some content that I created included in these DT patches.

I used a copy of Pacific Fighters when I created the B5N Single missions so that anyone opening the missions would think they were created in that time frame even though the B5N did not have a cockpit when PF was released. I used the D3A for the PF mission and then I altered the .mis file manually to use the B5N.

Testing the Burma QMB Scramble mission template tonight and after scoring 4 victories while lining up to score my fifth victory in less than 15 minutes the trigger happy friendly AAA over my home airfield shot me down. After I was hit not even an

was going to save my virtual pilot.

Taken from the eventlog

8_Static shot down 2 enemy aircraft and 1 friendly aircraft, ME. Of the other 3 AAA guns that scored hits one of them was another friendly fire incident.

IF this ratio were to hold you have about a 33% chance of being tagged by your own AAA whenever you and an enemy are within its firing range.

Anyone who has ever played IL-2 for any length of time will know how rare it is for every one of the spawn/stay points to be occupied by an AI aircraft. Normally something is messed up with the taxiways. There are 17 stay points at this airbase and the AI aircraft landed and taxied to all 17 of them. What was even more surprising to me was that they landed and taxied to all 17 stay points whether they landed on runway 17 or 35 !! 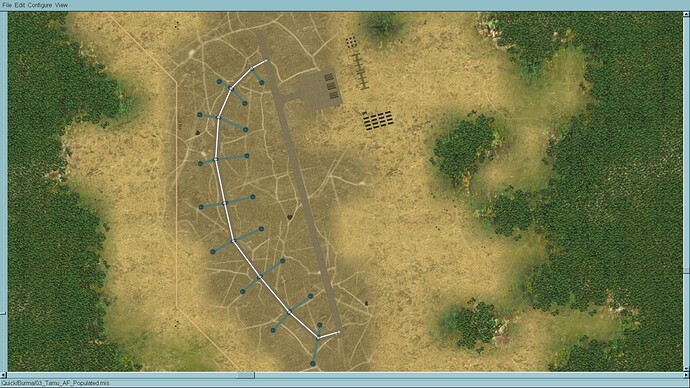 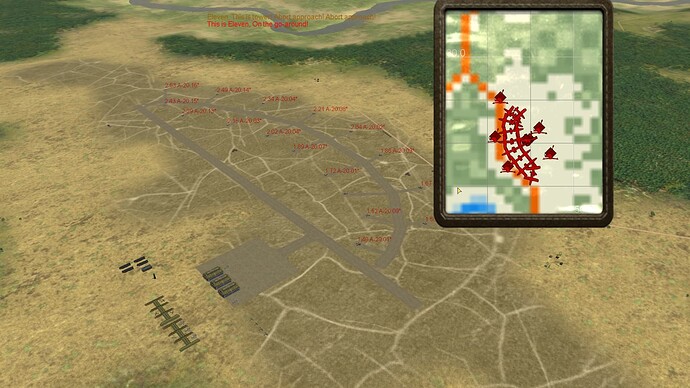 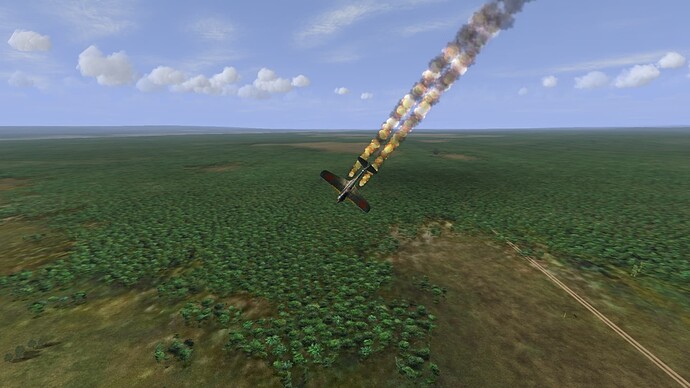 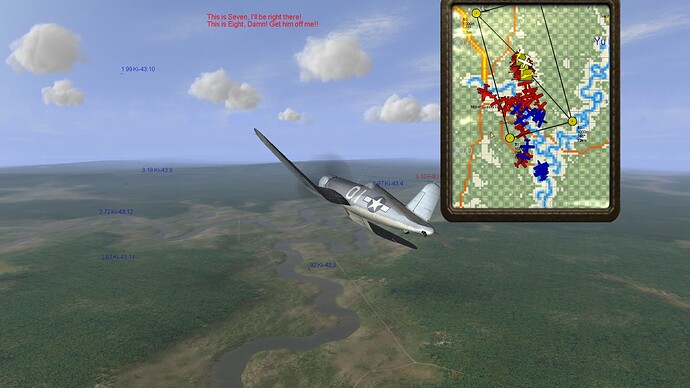 Anyone who has ever played IL-2 for any length of time will know how rare it is for every one of the spawn/stay points to be occupied by an AI aircraft. Normally something is messed up with the taxiways.

And the second airbase I work with proves the rule…

The map builder used the exact same layout for the airbase. However, They did shift it 15 degrees so now you have a runway 33 and a runway 15. 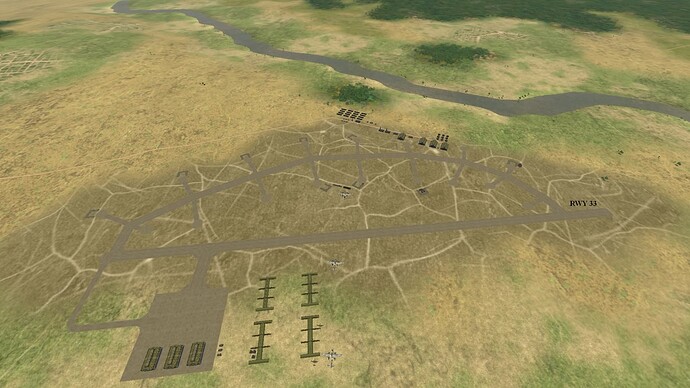 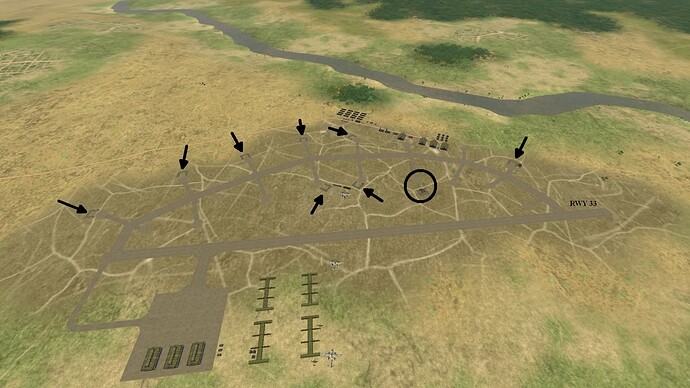 As you can see in this screenshot there are only 9 aircraft parked now. 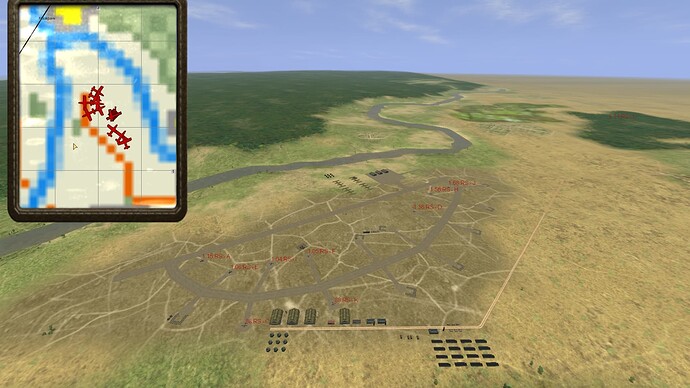 I have been doing some work with the stock Burma map using patch v4.12.2m. I only have a couple of Red Scramble missions done but I thought they might be a nice diversion for anyone who still might still be playing 1946. The files have been uploaded into this post. If the zip file does not create a Burma folder in your Quick folder then you will need to make one. The file path should look like this:
\Missions\Quick\Burma

Do you think I will ever finish the Burma QMB missions Discobot?
@Discobot fortune

Outlook not so good

I always liked a challenge Discobot!!

Burma is a beautiful map but the airfields definitely have issues…
I am still looking at the airfields one by one to see if there is a stock workaround/trick I can use so the QMB missions are playable by just about anyone.

One workaround I am already using is to remove a misplaced copse of trees on the secondary taxiway at the Palel Airfield in Grid B6, Map coordinates 16.2 x 54.4. 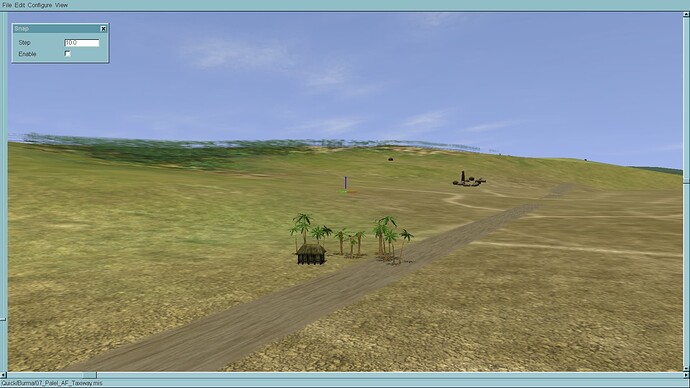 I placed a Stationary Object Train Stock Car 8 next to the hut and had the AAA on the field blow it up.
Outside of being black instead of white it reminds me of a Propane gas tank. 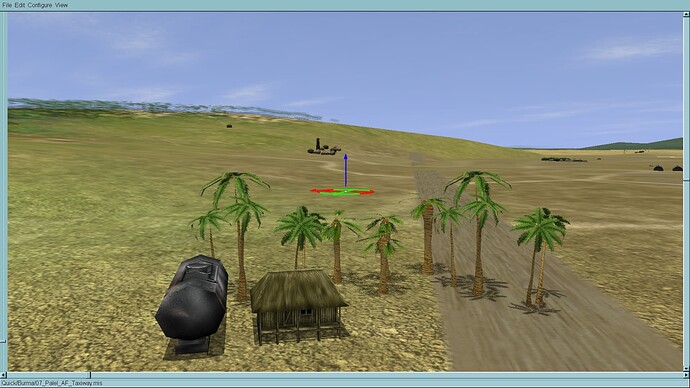 When the rail car blew up it took out the misplaced copse of trees and the hut just leaving some barely identifiable hulks that do not interfere with the AI aircraft using the taxiway. 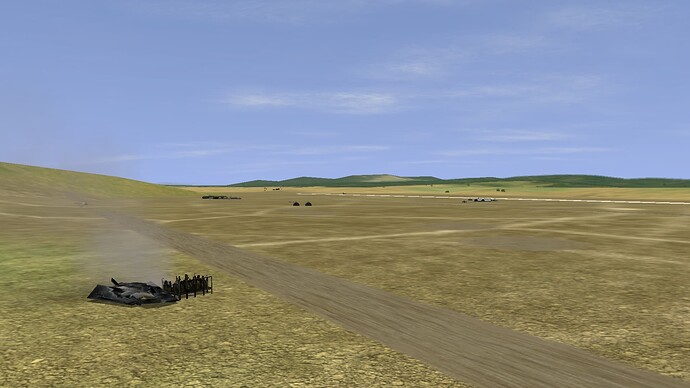 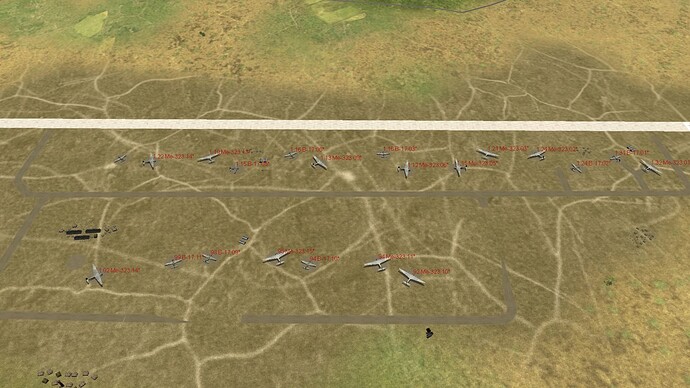 Even though there are some horrendous terrain issues with that secondary taxiway too. 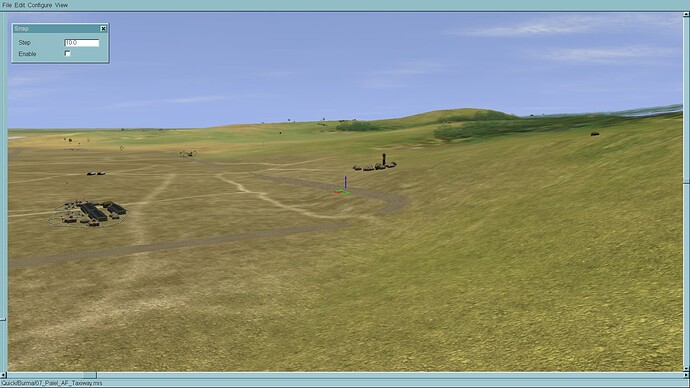 I used the Me-323 for my testing because as far as I know it is the largest aircraft we have in the stock game and if the taxiways function with it then it should function with any aircraft.

[4-15-cover-copy] Here is a link to the Official release announcement thread at the new Fulqrum Publishing Forums. 4.15 Release!: 4.15 release! - Official Fulqrum Publishing forum The Fulqrum Publishing forums was formerly the 1CEntertainment forums (Banana forums, unofficially due to the forums original yellow color). Brief description of patch 4.15 Il-2 Sturmovik: 1946 v4.15 Warning This version 4.15 is not compatible with previous versions when playing online. For compatibility when …