The Lewis and Clark Expedition..... by air. Anyone up for a trek?

I was thinking about some ideas for another trek and thought I would throw this one out there. I plan to follow the route of the Lewis and Clark expedition that officially started at St Louis, eventually reaching the Pacific coast at the mouth of the Columbia River.

I’m thinking that navigation won’t be too much of an issue for most of the route seeing as most of it follows a major river. It could be flown in anything really, but I’m thinking low and slow in a bush plane or something amphibious would be most fun. For an extra challenge we could start out at Pittsburgh PA (where the expedition boat was built and launched), follow the Ohio River, and then the Mississippi up to St Louis before starting the official expedition.

Google Earth map showing the outbound route from St Louis. Lewis and Clark split up for the return journey, shown in yellow.

I have a copy of Stephen Ambrose’s Undaunted Courage which I plan to read as I make my way along the route. This might take awhile, but I think it will help bring some added interest to the journey.

If it’s the one I’m thinking of; read it a few years ago. Very good.

I REALLY like historical drama (I think you call it?). Here’s one I’m into about 1/4 way right now, and excellent:

I’ll have to add that one to my list.

When I read these, and similar ones, I can’t help but think how easy our lives are – and how fortunate I am – compared to just a few generations ago.

It could be flown in anything really, but I’m thinking low and slow in a bush plane or something amphibious would be most fun.

This looks interesting! I like it! Not that I want to distract @BeachAV8R from DCS but I wonder if there are nice set of small airports/bush strips along the way

If you equip your bush plane with Tundra tires, you can just find a suitable field, hilltop, or sandbar. But I guess the challenge will be returning there to takeoff for the next leg.

This route is crazy! Amazing!

If you equip your bush plane with Tundra tires, you can just find a suitable field, hilltop, or sandbar. But I guess the challenge will be returning there to takeoff for the next leg.

That is going to be a challenge. You can save a flight while on the ground in MSFS, but when you load it again, the aircraft spawns at flying velocity, which makes things interesting. It is simple things like this that Asobo should fix (and it should be simple enough to save the aircraft state along with the position). You could always land in your chosen field, then take off and climb a few hundred feet before saving… then land again when you load the flight at the start of the next session. Not ideal though. I’d like to get rid of the logbook pop up at the end of a flight too (I don’t care a jot about a sim logbook tbh).

Sounds cool.
I am planning a few similar trips right now but none in that region so far.

I just havent decided on which plane to buy/use for those trips though. Probably the Piper Arrow because it can also handle bad weather if I choose to fly realistically.

There is a really nice Google Earth layer found under the Voyager - Education tabs created by PBS that includes some points of interest along with text and video. If you don’t want to take the time to read Ambrose’s (long) book then this will add some flavor. It will also show you the route at the points it becomes less obvious.

Screenshot from the iPad version of Google Earth.

A thread on the adventure rider’s forum chronicling the quest to find all of the known campsites along the L&C expedition via motorcycle. There are lat/lons (can be dropped into google maps search) listed for some of the campsites, along with photos, and conversations with various local SMEs. I found it fascinating, but it’s 469 posts over a number of years. When I read it, probably a few years ago, it took weeks, covering a few pages each night. Most likely a good reference for this journey though, if one wants to try to overnight at some of the original campsites.

I was taking in Glacier National Park eight years ago and heading home through some very remote back roads in northern Montana and I see a monument...

Great stuff Dan, thanks for the link!

Looks like an interesting trip. Especially now I got the vfr map up and working. It makes a big difference to me personally being able to follow a map

I was searching for a canoe for P3D or MSFS for you, but no such thing.
Realism!!

I’m thinking of using this… 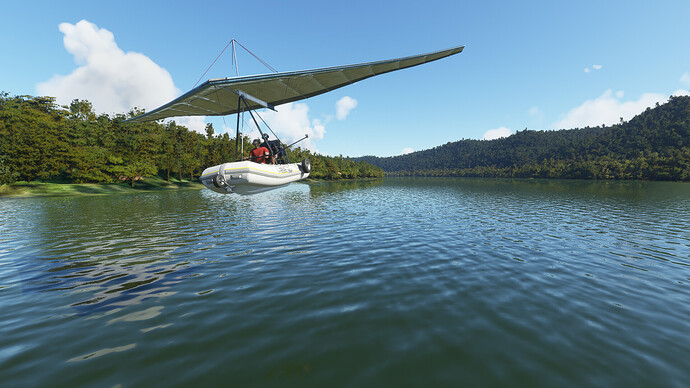 Nice Paul. My only reservation would be crossing the mountain passes. That also got me wondering if float planes work yet in MSFS.

Well, they work at a basic level. You can at least steer them on the water now (ie the rudder works). No wakes or water effects as yet, and you can’t drive up from the water to the beach or vice versa which is a bit of a disappointment. Another thing that Asobo needs to address I guess.

And here I was thinking the Icon A5 would’ve been roughing it!

I gave this some thought and came up with a very first draft of a route.
As always I tend to avoid the big airports. Also, no leg is a lot over 200nm so it should be possible for people like me who just don’t have the time to fly around for much more than two hours in a small plane.
Of course the legs will be planned in more detail later, including navaids (radio nav if necessary, but I’ll probably fly the thing purely VFR in good weather).

EDIT: I based the route based on this map:
“Lewis & Clark - Google My Maps”

I’m going to start out from Pittsburgh and make my way to St Louis. We will see if I have had my fill of the rubber boat with wings (it cruises at just 45 knots). I might change aircraft at that point…or not.