The Mighty Eight is the ultimate WWII Heavy Bomber simulator. It is a complete VR experience, but also playable through the regular videogame perspective.

We are honored to announce to you, our fans, that MicroProse is working on a brand new The Mighty Eight title for Virtual Reality.

The Mighty Eighth will be a VR-first project (but also playable with no VR enabled)** in which you will be able to play with 9 other friends (or AI crew) as you work together to survive the war and accomplish your missions.

Looking forward to it.

The Mighty Eight is the ultimate WWII Heavy Bomber simulator. It is a complete VR experience, but also playable through the regular videogame perspective.

Microprose just launched a webpage for their The Mighty Eighth game. They are saying their game will feature multicrew for up to 9 players in VR and 2D as well as a flyable B-24 in addition to the already announced B-17. 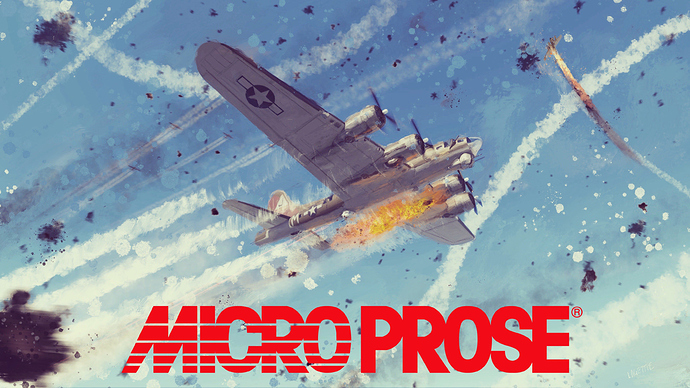 Wow that’s going on my wall

Just seen some details on the features Sryan listed.

Well there goes my game, that I never got around to do anything at all with. Literally nothing at all

From the Storm Birds article:

At this point we don’t know how “serious” of a sim this is going to be. With the bar set high by the likes of X-Plane, DCS World or IL-2: Great Battles, is MicroProse making a detailed simulation of a B-17 or B-24 with every switch, dial, electrical and control system modeled? Is the aircraft going to fly by the numbers and have a detailed physics model to guide how it flies through the air? Or does it eschew a few of those features in the pursuit of being a little more accessible?

An excellent point. I personally would prefer they focus more on some of the other systems (a fully working norden bombsight for example, or maybe the gunner sights in the ball or ventral turrets), then trying for A2A levels of flight accuracy. Did the B-17 and particularly the B-24 have their flight quirks, absolutely. However for a lot of a mission you are boring a hole in the sky in formation. Additionally if the AC are supposed to be rivet perfect, you know “that section” of the fan base will show up with pitchforks and torches for any issues they observe. I’d personally prefer a 90% implementation, with full/very high fidelity in some other areas versus spending that effort on systems modeling the AC.

I think that it needs to have options for both enthusiasts and gamers, because after all if it’s a commercial success, then in theory we should all benefit. I like what Codemasters is doing with the DiRT series, with branches for both sim types.

To be frank, I only care about being a gunner in VR and shooting big 50 cal and reloading it using Steam-knuckles. That sounds like fun.

The thing that made the original so special was the crew experience. I think this will be the decisive factor, not the systems modelling. That, I think, will be good enough at “plausible”. I don’t care if it handles exactly like the real deal, as long as bringing her home on two engines is challenging enough and taking off with a full load isn’t like flying an F-16. Would be cool with a hydraulic system, but it doesn‘t have to be 100% realistic, if you know what I mean.

For it’s time, B-17II did have all the switches and controls available and clickable- I still have my copy of the manual, and you can do the full startup of the B-17, trigger extinguishers, feather props, etc. Or you can jump to the flight engineer’s seat and do things like transfer fuel between tanks. And it was the same for the P-38, P-47, P-51, Bf-109, FW-190, and Me-262.

Would be cool if it could be manipulated with VR controllers…

To be frank, I only care about being a gunner in VR and shooting big 50 cal and reloading it using Steam-knuckles. That sounds like fun.

Don’t forget manualy cranking that gear that failed to extend on finals.

Or if that fails, scetching a big pink one with crayons the navigator happens to have brung along

Or if that fails, scetching a big pink one with crayons the navigator happens to have brung along

I have a faint recollection of seeing that in some TV show back in the 90s? What was it?

I agree with @Troll and others. I don’t need an accurate simulator. All that is needed is for it to look and sound great and I will be thrilled. I can already hear @JediMaster and @Gunnyhighway manning the guns and laughing on comms as waves of 109s dive in to the formation. This could be a classic.