MicroProse to publish Tiny Combat Arena.
The 90’s called and want their graphics back… 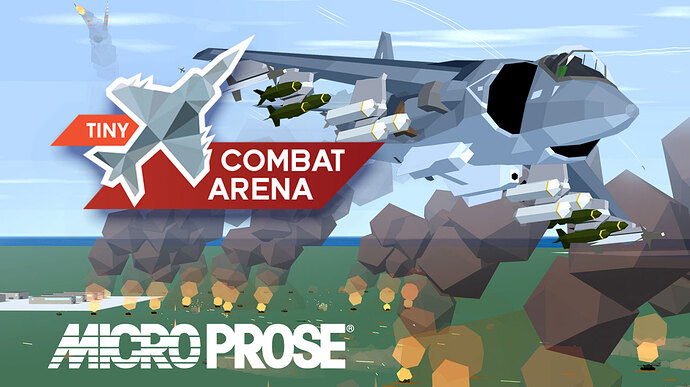 Tiny Combat Arena is an approachable flight combat simulator sporting a stylized look and various game modes. Dogfight your way in the arena and in quick action or craft your own scenarios and take part in a vast war with objectives and friendly...

Wonder if it will support VR…

I was just about to post this once I saw it on steam. The sim reminds me of A-10 Cuba and F/A-18 Korea. I had hours of fun with those two and I’m looking forward to getting this one.

LOVE the music soundtrack! This is a perfect VR candidate. Actually reminds me of VTOL VR.

MicroProse is really starting to kill it in terms of their game lineup (ie. Ground Branch).

interview with the dev here

I’m in friendly terms with the dev on Discord and he’s really a cool guy.

There’s something about those gouraud shaded polygons that speak to me… The graphics remind me of good times.
I can’t help thinking about seeing this in VR.

I played like the tech demo of this a while back and it was quite enjoyable. Looking forward to seeing how the game has fleshed out.

its not just the graphics imo, this dev have it aligned correctly in his mind I would say

I look at games like the classic Jane’s Fighters’ series, or the earlier MicroProse games like F-19 and marvel at their elegant simplicity and game design choices. I think it takes a lot of confidence in your game to eschew realism the way those games did, because in a lot of ways it’s “easier” to just copy real life and hope for the best.

Realism is way overrated. People will always tell you they want more realism, but I don’t think most understand the far-reaching implications it has. A common design trap is the idea that adding realism makes a game better.

I think a lot about the Jane’s series of games and how they’re so much fun and so beloved by the flight sim community, and how those games are a lot closer to Ace Combat style games than I think most fans would ever admit. What Jane’s does so brilliantly is that it dresses up its very arcade gameplay in real life acronyms, concepts, a licensed name with weight, and a very grounded presentation, to trick people into thinking it’s a simulator.

On a mechanical level, it’s pretty much an arcade flying game, but if you had a button to manually turn your radar on, and had limited missiles. The Jane’s Fighters series practically wrote the book on how to gamify modern air combat into what people think modern air combat is like.

Unless you are specifically setting out to make a high fidelity simulator (which I don’t recommend for a multitude of reasons) I think it’s far more important that your game feels realistic, rather than actually being realistic. It’s a fine line to walk, and it’s something I worry about with my own game all the time. The best examples of the genre know how to walk that line, and are confident that their design decisions make for a better experience overall. How did you get the demo?

EDIT: I knew it would have been cool, but I couldn’t believe my eyes- ABSOLUTELY stunning!

release is supposedly just around the corner

I’ve been following @Why485 on Twitter for years now as the developer has worked away on the prototype for a flight simulation combat game now titled Tiny Combat Arena. The title, picked up b…

Yeah I’m friendly with the guy, I was just wondering if the demo was out or it’s one of those ‘influencer have it’…

How did you get the demo?

Why gave me the code some time ago. I guess I’ve been selected as a beta tester. Just flew this for about 20 minutes. What a spectacularly fun game. I took about 5 minutes or so to set up my HOTAS - Warthog throttle/stick and rudder pedals. Control mapping looked good. After about 10 minutes of flying and bombing stuff I somehow lost control of my button mapping…I wonder if a windowed mode was causing a problem.

Anyway - first impression is: fantastic fun! I really, really enjoyed it. Kind of like a 2D VTOL VR / lite flight sim / lite strategy sim. The pixel art or whatever is fantastic…and the smoke and explosions…and camera controls…are all great. More to explore for sure…but really enjoying the first bit of it.

Though it’s not VR, it supports Track IR, which combined with the 90s graphics creates a cool mix. Easy to get into, and with some tinkering in the json files you can unlock WIP maps. Here’s Fulda Gap: New update really hit the settings, controls, and camera… had a blast with it, especially the ground war in my 2nd sortie of this video… coming along nicely for an early access, one man job… It’s fun, and easy…too easy maybe. but good for us crappy simmers. lol

I just got my joystick fixed and am looking forward to exploring it further. From what I saw from my brief moments of gameplay it was fantastic… Just the right amount of complexity to make it challenging and fun. Nice to not have to consult a six page checklist to start playing…