Ubisoft is closing its forums

In 2021 Ubisoft deleted all inactive forum accounts. I posted about it at that time.

Now they are intending to take the forums Offline as of March 31, 2022 and move to a new Discussions platform, which they have already created.

1920×910 212 KB
IL-2 Sturmovik, Silent Hunter, and all old simulations content is going to be lost permanently so if you know of something you want to get from there now would be the time to download a local copy of it, or hope it has been archived at the Internet Archive…

Lol, I am not a big fan of Ubisoft either but there is a lot of information on older games contained in those forums that is going to be consigned to the digital land fill in a few days that people do still play, just not enough for Ubisoft to continue to support them.

Linking to an article or a site is a great tool but unfortunately it leaves a lot to be desired in these situations. Even though it is against convention, and quite frowned upon in most instances, I almost always link to the article and then post the entire contents of the article I am linking for this very reason. At least when the site goes down if your site is still live the information is still available. 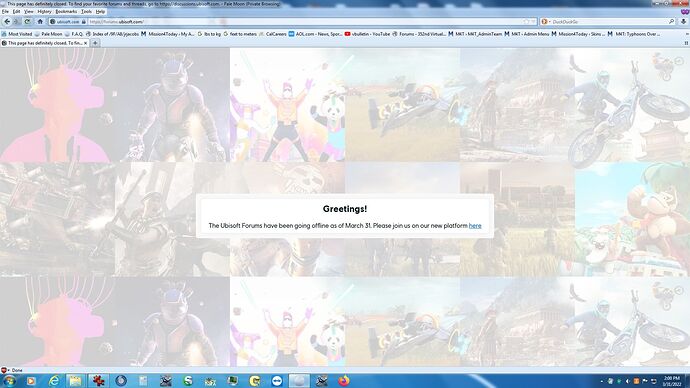 I tried to do a quick search of the new platform for Sturmovik and Silent Hunter and as I expected nothing came up. I also tried to look at some allegedly existing topics but you stay on the homepage no matter which link you click. That may change in the next few days as they get things sorted or you may end up being required to login to search or post anything on their new platform?

rm, which they have already created.

their forums were horribly moderated anyway.

Piggy backing off an old thread. Ubisoft is shutting off access to several older games. Even singleplayer. Which is a DB move.

Makes question if I want to buy Ubisoft games in the future.

BTW, if you have Silent Hunter 5, you’d better play it while you can, as they’re disabling access in a few months. Even to single player.

Bring back DVDs and no online activation.

This is just so moronic.

EDIT: unless it’s a money problem - like upkeep is too expensive, but then kicking users in the face like that will not increase the trust in the brand…

I can see not offering it for sale anymore or even offering online servers. if a game is completely single player or has a single player component, you can’t shut that off. Or, at the very least, you have to offer compensation.

Look at the steam Silent Hunter 5 page.
It says that the game will be unavailable starting september 2022…

EDIT: Oh wait- Now I see what you wrote. Sorry! I’ll strike off my blunder but I’ll leave it up to see if I’ll
ever learn reading right the first time around.

Why wouldn’t they release a final patch removing the DRM they are shutting down? Truly a richard move.

Probably because no one wants to touch code by someone else that’s also a decade or so old?
I know I wouldn’t!

The ethical thing to do is to, when ordering the dev team to add in DRM, to also have them engineer the Final Patch that releases the thing from online DRM.

Hey I agree but this is Ubisoft we’re talking about…

SH5 was crippled from its release due to its DRM scheme. Only took a decade but now it seems that all the other concerns regarding SH5’s DRM scheme at its release ended up being valid.

Unfortunately that isn’t always how software development works. Over the course of several years, you might very well be left with a patch that doesn’t just remove DRM but breaks other stuff.

Anyway, in a case such as this, I’d consider it abandonware and it’s no longer piracy, it’s legitimate conservation of public access to cultural legacy. Which perhaps removing DRM always was to begin with…