Update from Beach from San Juan

Don’t have a bunch of time…seems like when we aren’t flying there is endless planning instead, trying to keep abreast of the rapidly changing conditions.

When we are in San Juan, if we are at the airport FBO we have pretty good WiFi reception. The only cell reception I found was when I walked about 2 blocks from the hotel (not recommended by the security staff though) and found a spot on the beach where I got a couple bars. We have these Verizon Jetpacks that we can put in our windows in the hotel room that pick up cell and converts it to a local area hot spot. Those seemed to work better than our phones, but were very intermittent. I can’t tell you how frustrating it is as a pilot to not be able to flight plan without cell or internet. Essentially, you grab information when you can, and hope that it is current enough when you launch.

The other crew also flew to St. Thomas and St. Croix and had no comms of any type on the ground. They used a portable Iridium phone they were issued to call me back in St. Pete where we were getting duty rest to file flight plans for them.

The conditions are challenging without radar because without it, Miami Center will not issue a clearance and if you leave anywhere other than San Juan, you are forced to stay VFR below FL180 for nearly 180 miles westbound until you are within Miami ATC radio range. At that point, you are burning nearly double your fuel burn and there have been a lot of diversions and turnbacks due to people not having enough gas to make it to Florida. Those that do try to venture VFR to a pop-up IFR clearance then face the challenge of dueling with the traffic that departed IFR out of San Juan, and Miami can’t hear the VFR guys down low begging for clearance and higher as they watch their fuel consumption numbers. The good Samaritans at FL280 (the only altitude you are cleared to out of San Juan) are trying to relay clearances from the guys below to Miami and the frequency is just a complete mess. To the point that Miami put eight plane an hour metering into San Juan starting today. It is really and truly a mess and a lot of people are operating at the margins of their fuel reserves and safety.

One guy got busted yesterday for disregarding the airspace restrictions and he climbed into positive control airspace (above FL180) to the mid 30s to pick up his clearance. Miami was like “WTF…how did you get to the 30s VFR?” followed by “take down this number”. I ran into the guy at the FBO in St. Pete as I was getting ready to launch the other way toward San Juan. LOL…he looked like he was having a really, really bad day. “The worst day of my life” was actually what he said to me…

So it is very wild, wild west out there. If you are going to TISX or TIST you have to go VFR because there is no radar and this isn’t the type of airspace where you can do traditional non-radar movements (like oceanic stuff). It’s just too busy and too little comms capability. The night before last I heard a Reach airplane (I think that is a C-17 out of Charleston) come into the limited San Juan radar zone and as he was exiting east to go to TISX they terminated his IFR and the gal that was the aircraft commander was surprised by that. She was like “uh…we’d like to shoot the RNAV approach into TIST” and the San Juan radar controller was like “well, you can do whatever you want to do, but you’re gonna have to do it VFR”… And that was that.

Personally, given our relatively short legs on the Citation I fly, I’ve decided to only come back through San Juan, tanker fuel, and get a real IFR release instead of gambling on the VFR climb to IFR. My wild west days ended when I hung up my freight days…LOL…

Any-who…that’s what’s going on out here. Sorry I haven’t been able to participate on the site…I’m looking forward to coming home, but I’m being asked to stay another week to orient the relief pilots coming in in a couple days…so we’ll see. I’m really looking forward to flying that Su-33…!

They got some footage of us arriving… 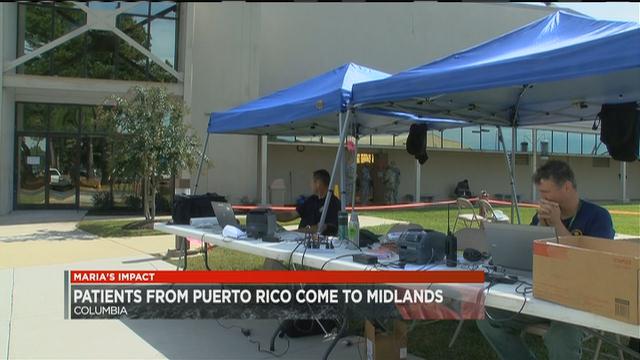 All hands were on deck at the Columbia Metropolitan Airport on Monday as the state continues to help medically evacuated hospital patients from Puerto Rico and islands hit by Hurricane Maria.

Stay safe there Beach! That’s a challenging situation, for sure. Hope we can read more about it when it’s all said and done

PS: I am going to move this out of the ‘Where You Are Photos’ because I think it might get lost in there

Descending into a very dark San Juan, PR. Feels like an EMP went off here.

As a group, we decided going back to San Juan tonight was a bridge too far. I’ll post pics from there when I can. Most of the federal relief workers I’ve encountered are saying it is worse than Katrina…just not with the loss of life. It will take years of recovery efforts.

The carpet of our hotel room was wet. We’ve named it The Swamp. Everything I own is now damp…

Happy Birthday Chris! Thanks for being out there making a difference.

A happy new spring on your back, @BeachAV8R!

Many happy returns Chris and big pat on the back for your continued humanitarian effort.

Happy birthday Chris and thumbs up for your relief efforts!

Honestly, I have no idea how the Caribbean have to get fixed. The logistics of that alone impress me.

Come back safe, rest up and we’ll get to watch @near_blind drogue tank up in a 50 degree bank in the dark and me crash into the deck.

I moved these posts out of the Where You Are Photos thread because I thought it was important to hear what our fearless leader is up to and that might get lost in the other thread. Please excuse the temporal issues above this post

@fearlessfrog might be able to do a little magic to fix the timey-wimey problem I created. @BeachAV8R I apologize for hijacking and cutting up your thread

I punched Biff Tannen and managed to fight off my mother at the prom (euhh) but got hit in the jaw with a Delorean car door, so things stayed ‘heavy’.

My technical fix is that we just ignore it, never mention it again and it’ll be fine.

BeachAV8R,
Althou I have not lived there since the 80s, I am Puerto Rican. I just want to say. THANK YOU for helping out in this time of need. Without the assistance of pilots like you, the island would be worse off. You are much appreciated.

Beach, thanks you for what you all are doing there. I was on Guam when several typhoons hit the island. The magnitude of the destruction and impact on life and economy was a teeny tiny fraction of what is being experienced in poor PR. But we had FEMA, ships, C-130s, fuel and generators staged on the island BEFORE the storms hit. Americans need to call the island North Carolina and MAYBE they will understand the need for immediate support for Americans in trouble.

Well…that’s me typing. You are doing. Thank you!

Oh!..that map is super cool! Reminds me of the old maps Jeppesen drew to keep himself off the granite as he flew the mail.

I showed the map to my friend who was flying Twin Otters for Eastern Metro out of St Croix during hurricane Hugo. He said that they went 8 months without power. Hugo was a smaller storm, but sat stationary a while longer over St. Croix. His comment was that map looked very similar to the one he used at the time.

I was living in Munich at the time, but my dad said that John caught a jumpseat ride on an EAL B752 back to ATL. He was only in town long enough to purchase two necessary items, a Honda generator and a Sig P226.