A Russian Su-27 aircraft has intercepted a US EP-3 spy plane in “unsafe” fashion over the Black Sea, the US Navy said. It posted video, on Twitter, showing an armed Russian fighter jet flying within meters of the spy plane.

Pretty close I guess. Looks awesome in infrared regardless of what happened

Yep…back during the Big One, the Cold War, we used to see a lot of that…in the air and on the sea. Eventually we worked out something called INCSEA (Incidents at Sea Agreement) with the Ruskies…INCSEA had rules for aircraft and ship interactions…minimum distances and altitudes for the aircraft…don’t open you bombay doors…stuff like that, but not so much air-to-air interaction stuff. Right at the end of of the Cold War they introduced an air version of INCSEA but it never really took hold because when the USSR went down the tubes, their military budgets got cut and they weren’t flying as much…but now they are flying again…so…

EDIT: This is what I meant about it happening at sea. Unless you just can’t get enough of Bon Jovi music, go to 3:07 and 7:25. My Soviet ship recce is a bit rusty, but the dark hull, white superstructure ship is a Moma-class AGI–an intel ship–and I think the combatant is a Petya-class FFL. 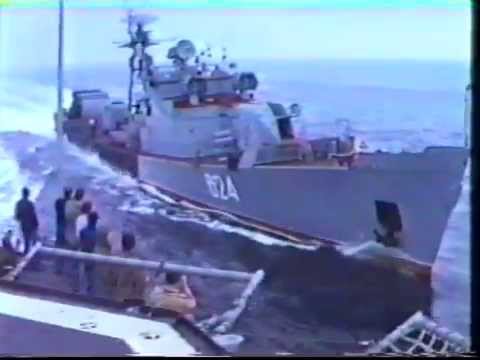 You may note that the US Navy ships are only 7 Nm from the Russian coast. Yes, 12 Nm are considered territorial waters (TTW), and warships of another nation are not allowed to enter unless when invited, EXCEPT, you can take a shortcut across the TTW extending out from a peninsula as long as you maintain a constant course and do not conduct any military evolutions. It is called the Right of Innocent Passage–it’s international law.

So we (the USN) would from time to time conduct what we call Freedom off Navigation Operations or FONOPS. It is also international law that if a country makes an excessive claim (like don’t take a short cut across our TTW around the Crimean Peninsula), and nobody challenges it (by taking the shortcut every so often), then the excessive claim becomes recognized…hence the FONOPS.

The Soviets still didn’t like us doing FONOPS so they would come out and “shoulder” the USN units, basically what they are doing in the video, just bumping up against us to show their displeasure. (Funny, when my cats do the same to my leg it means they want to get petted). Anyway…

They started decommissioning those boats in '89, they were probably just trying to get a jump start on the scrapping paperwork.

Reminds me of this P-3 propeller blade.

Where You Are Photos Screens & AARs

I was reading the comments of the video @Hangar200 posted and someone mentioned a funny story involving a Phantom and a Tu-95.
Googled it and… 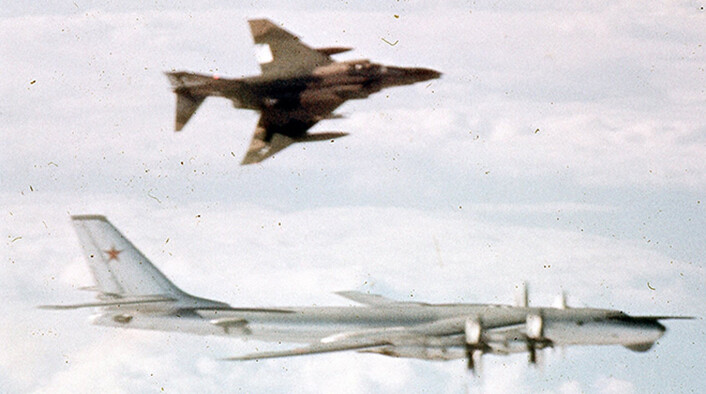 Here are some memories from the Weapon Systems Officer who shot the famous photograph of the F-4 flying inverted near a Soviet Tu-95 Bear bomber. Last

The Cuba flights mentioned in the article were an interesting aspect of the Cold War. The Soviets flew a pair of Tu-95 BEAR Ds and Tu-142 BEAR Fs down to San Antonio de Los Banos (MUSA). About two days after they got there, a BEAR D & BEAR F would continue on to Luanda, Angola. Then the various BEARs would conduct open ocean recce missions for about a month. After that time the Luanda deployed BEARs would head back to Cuba and then all four would head back to Russia.

The transit flights were very long. On the way down to Cuba, the BEARs could expect to be intercepted by Norwegian fighters (eventually F-16s) as they passed over North Cape, the USAF F-106s or F-4s out of Kef, and USAF fighters out of Maine as they flew down the US East Coast. Of course if there were a carrier out in the VACAPES or JAX OPAREAS, Navy fighters might also have a chance at an intercept.

When we did work-ups in the Puerto Rican OPAREA (the PROA), after normal flight ops, we would have two F-14 aircrews standing Alert-15 (jets with a straight path to the CATs / aircrew in full flight gear, sitting in the ready room) whenever there were BEARs in Cuba…not an enjoyable duty since, during work-ups we usually did about 18 hours of flight ops a day.

Ahhh, the good old days…I’m getting a bit misty here…I need a moment.