Been going for several hours now, both Navy and San Diego Fire Department responding to the blaze. From reports I’ve found so far, 18 sailors transported to area hospitals with non life-threatening injuries, but the crew is still attempting to fight the fire at the moment (though this seems to be changing rapidly). Hope the crew and civilian firefighters can stay safe. @SurfaceWarriors
Local, base and shipboard firefighters are responding to a fire aboard @LHD6BHR located on @NavBaseSD. Initially, eleven Sailors have been transported to the hospital for minor injuries. The entire crew is off the ship and all are accounted. More information to follow.
4 Likes
BeachAV8R July 12, 2020, 9:23pm #2

When you back up the live video to hours ago when it first started it looks waaaay worse. That black smoke coming out of the sides extended all the way to the stern and it looked like a significant bit was exhausting out from under the super structure. The live video now is showing more whitish smoke coming from forward of the sail…so they might have made progress aft of the sail. I can’t imagine how many hundreds of millions of dollars of damage were done there. Hopefully the crew that are injured are not badly injured…

There’s a thread over at /r/navy with real-time updates.

Looks like at this point the ship has been evacuated and the firefighters are going to let it burn itself out. Ships at piers adjacent are reportedly making preparations to get underway right now.

Oh dear. How old was the BonHomme?

Looks like at this point the ship has been evacuated and the firefighters are going to let it burn itself out.

So the LHA has gas turbine engines…does that mean it uses diesel fuel or is it some sort of oil? In wonder how much would be aboard in dry dock…

So I’ve heard a rumor that the fire originated at one of the shore power breakers or risers (450 Volt, very high current), and spread from there (I’ll tell stories another time of our own exploding breakers). As for fuel onboard, I’m not super familiar with LHDs, but from a shipmate of mine who was an A-ganger on both Reagan and Bonnie Dick, she could burn anything from JP5 to DFM to NFO.

Since she was in an availability period, her fuel bunkers wouldn’t be topped off, but there would still be fuel aboard, especially as you’d need to ensure capacity for the emergency diesel generators in the event there’s a loss of shore power.

My understanding of the current fire is, evacuations began when the fire reached fuel lines up forward.

So the LHA has gas turbine engines

Also, as a clarification, she actually has oil-fired boilers and steam-propelled machinery. Makin Island, the last in the class, was built with gas turbine propulsion.

What does that mean? I saw a number of comments in the reddit threads about ‘availability’, hinting at how the navy uses that status to save money but keep the ship in some sort of ‘availability’ or quick turn around mode? I am guessing that is what it is.

Basically, she’s down for repairs and refit- a maintenance availability, if you will. Existing systems are being worked on, and new ones installed- in this case apparently in preparation for her to operate F-35B’s. Which means that the only crew aboard likely were the duty section and perhaps civilian workers.

Fires still burning, and it appears that fire teams are still trying to work back aboard her.

A couple of pics from earlier in the day: 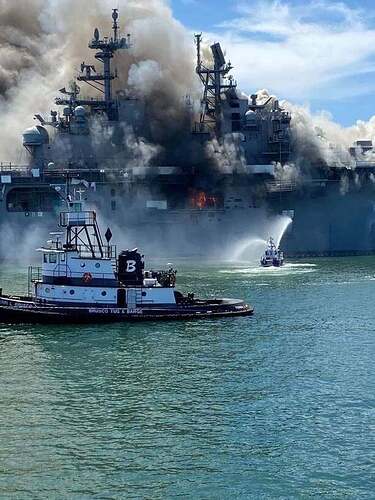 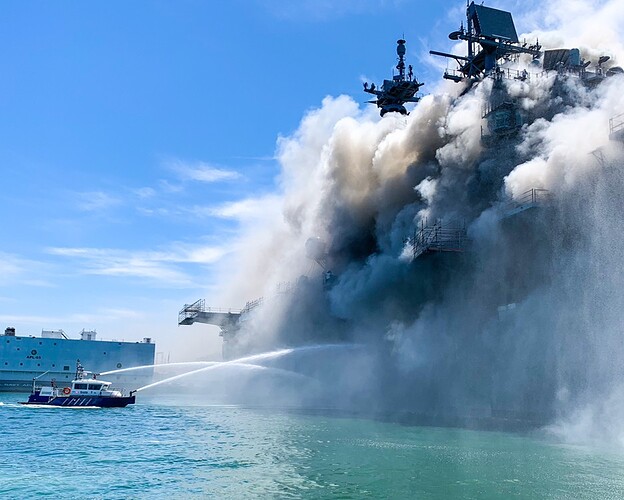 I’m guessing at this point the ship is going to be a total loss??Thankfully this didn’t happen at sea!

I honestly would guess as much, though from what I’ve seen on Reddit they may still be trying to save her. However, I saw this post a little while ago that may prove otherwise:

r/sandiego - Here’s a look of the BHR from my point of view right now. 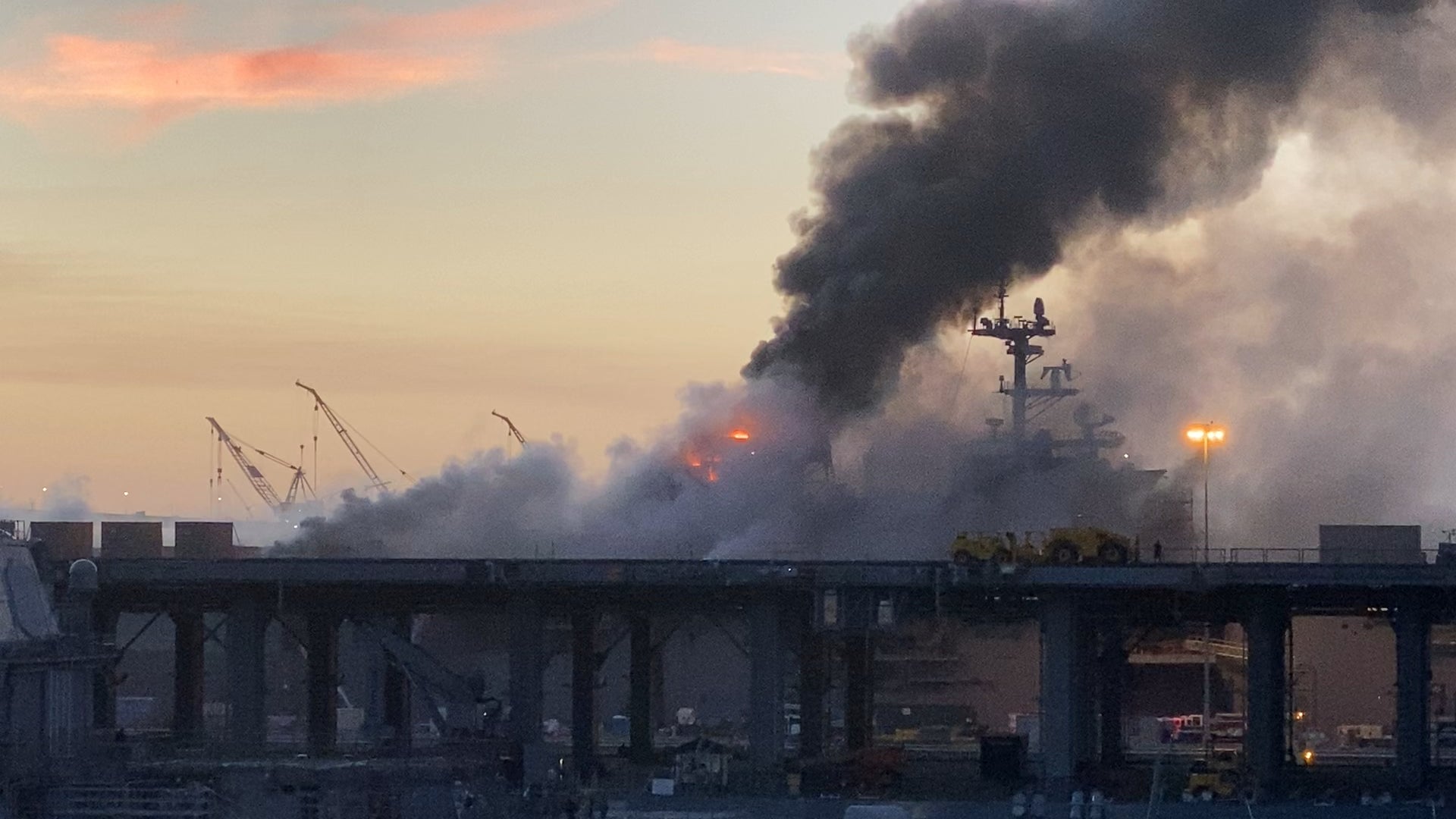 As for if this happened out to sea, honestly it’d probably be easier to fight underway, with the ship and crew fully ready… When the GW had her fire along the bottom of the ship 12 years ago, it took the crew about eleven hours to contain it, but they were able to save the ship.
https://www.navy.mil/submit/display.asp?story_id=37377

In this case, because the BHR is moored and in a yard period right now, there are going to be hoses everywhere through hatches, passageways, ladderwells, and likely extra holes cut in things for access to welding, cutting, brazing, painting, and everything else that goes with an overhaul period. As a result, it’s going to hamper firefighting efforts and make it nearly impossible to seal off spaces and compartments that are affected, which would have slowed or potentially stopped the spread. Then, add in oxygen or acetylene canisters for welding, and you’ve got additional fuel sources and things that also like to explode.

Finally, firefighting efforts would be additionally hampered by the fact that it’s very likely the firemain system and equipment aboard the ship weren’t able to be fully utilized - if there’s work being done, it’s likely parts of the firemain system were tagged out, and getting enough pumps online to get sufficient pressure to the rest of the system would be a challenge- the pumps have a pretty high starting current, a decently high running current, and the largest pumps aboard are steam-powered, and unavailable when the boilers and main machinery spaces are in a cold iron configuration. I mentioned the current requirements for the pumps, because there are pretty stringent shore power limits in terms of what the breakers on the pier are rated to handle, and if the emergency diesels couldn’t all be started and operated (for any variety of reasons), it’s likely there simply wasn’t enough juice to fight the fires.

Thanks for the info Ted. I hope they can save her, but it doesn’t sound too promising.

Looks like they are dropping water on it from helicopters at night right now. Hope they don’t risk too much there for what looks to be little reward at this point.

Last year a Russian Trawler caught fire here in Tromso. They had to sink her to control the fire. And that was a much smaller ship…

Some of the last daylight pictures showed the entire superstructure in flames…I think that is the end of her. I wouldn’t be surprised if she is resting on the mud by daybreak. Wow. 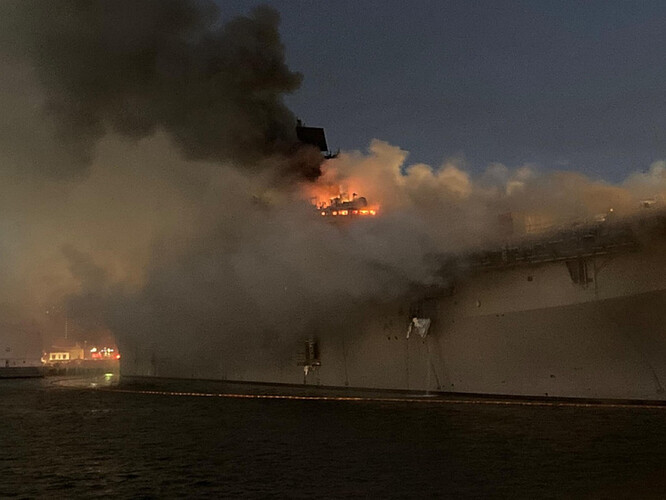 I wouldn’t be surprised if she is resting on the mud by daybreak. Wow.

Looks like the fire is topside, yes. In a Reddit post a junior sailor assigned to her said they pulled some of the firefighters back before the flight deck started buckling (I had no idea nonskid could burn), and word is the island has started collapsing. I doubt she’ll sink at the pier- that would create an utter nightmare in the middle of the shipyard.