Thinking about getting voice attack as I start to learn the F-14. Mainly so I can easily navigate Jester and secondly cause I would feel cool (lol) talking to him.

How well does it work for other areas of DCS? For example say I’m flying my harrier and want to checking with JTAC. Can I hit my comm button and then say a phrase and it will select the correct buttons?

Also how is it word recognition? Don’t need the family hearing me yell at my screen because it thinks I’m requesting landing instead of refueling.

In my opinion it’s worth the money, but there is definitely front end set up needed, and you’ll want to run through the voice recognition program several times so Windows “learns” your speech patterns.

I agree with Navy. I’ve been using VA together with VAICOM, which hooks directly into DCS, and much like TrackIR, there’s “some assembly required” on your part to get it up and running, but it’s near impossible to go back to using the keyboard once you’ve been using it.

Yeah, it works pretty well, definitely worth the money, but I noticed that it has problems with parts of my pronunciation.
I dont use Vaicom but my homemade profile, and I have to adjust words now and then because the speech engine just fails to recognize some words.

Since you’re here, it’s worth it. And yes, it’s kinda complicated to set up, though the VIACOM Pro option helps.

I’ve left a button on the HOTAS for bringing up the menu for instances when I can’t remember the correct phraseology [it wants].

Makes working with the wingman/tanker/JTAC easier. IF we ever get something resembling real ATC then it should be even more helpful. I’ve been using it for a year+ now and have had few voice recog. issues.

I imagine that helps a lot so you don’t have to use UK English pronunciation.

I am using German though. But I will have to look up whether there are settings for different German language versions as well. Thanks!

I just bought voice attack yesterday and got the viacom plug in but have yet to start making it work as I bought vorpX at the same time and made myself sick in arma3.

Hey guys, is anyone having the latest DCS open beta build lockup at the 10% loading screen when you have VA running? This is happening to me. I had to run shutdown VA, then run a DCS clean and repair to get DCS to launch again. Same behavior in/out of VR. I think that it has something to do with the way VA modifies RadioCommandDialogsPanel.lua, because this is one of the files restored during the repair. Other than that, have no evidence what is causing it.

Same experience. It’ll get fixed, be sure. Probably not even two weeks.

Found a reference to the problem in this thread. Will try further troubleshooting after work today.

I had that issue before when I switched to open. Make sure the ob button is checked so it dosent rewrite some stuff.

I noticed with the viacom pro carrier update it unchecked the ob button.

Yeah, that was it. I swear that I had this set before. Anyway, in VAICOM configuration panel > config, check your custom path and set slider to open beta. Then restart VA before launching DCS. 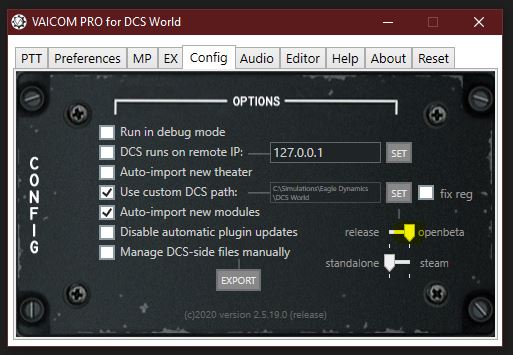 Before it was a check box and now it’s a slider so I think the update sets it to stable instead of open.

Can someone explain about binding a switch to a hotas and do you only use it in easy comms. I haven’t got past speech learning yet, damn my accent

What do you need to know? Exact procedures for the bind? Or something else?

As I may have mentioned earlier, the UI isn’t the simplest thing. Ya kinda have 2 UI’s to deal with. Here’s where you go, if I understand the question:

Trying to cram these steps into one image but you should be able to see the first step(s) here: 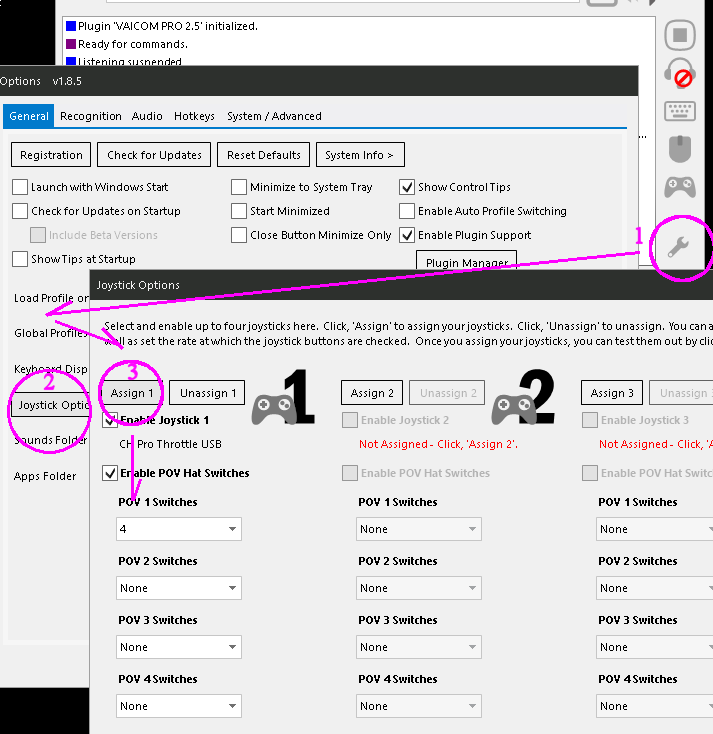 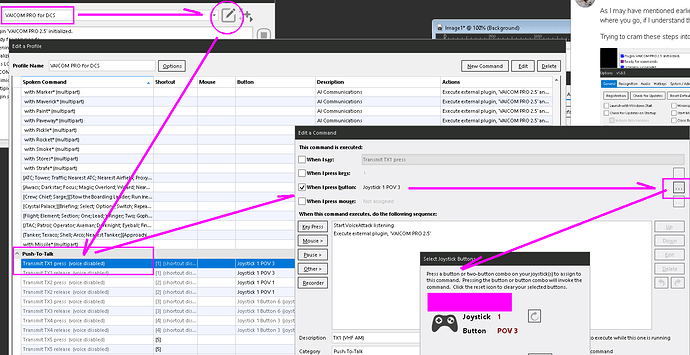 In the bottom flow you double-click the Push To Talk entry for, in this example, Transmitt TX1 press (voice disabled), which brings up the Edit A Command window.

AND! If you reconfig your HOTAS you have to come back to all this; may only be an issue with CH products or those where you end up with ‘virtual’ devices - you change the virtual device ID’s and VA gets corn-fused.

I don’t want to use my 4 way thumb hat on my throttle because I use that for srs etc. Also how do I know what to say?

I don’t think it matters what HOTAS button you use, the above is just what I did. I use VIACOM Pro so I’m not going to be much help concerning VA-only setup. The second set of steps above is VIACOM Pro related.