Vote for the next Mudspike Air Cargo aircraft...

So this weekend MAC is moving to the next level. With 40% reputation achieved (finally), it is time to retire the Cessna 185F (sniffle) and move into something larger. The testing process has touched on many aircraft weighing affordability vs. cargo load vs. operational ability:

What we are looking for is an ability to retain our short field capability because MAC is all about squeezing supplies into impossible spots. The rough field capability eliminated a few contenders. Others, that I really liked, just didn’t have the graphics/virtual cockpit that would make extended flying fun (I’m looking at you VirtualCol). In the end, I’ve narrowed it down to two aircraft: the Twin Otter and the Do228 - both proven rugged, short field performers with good load hauling capability.

To keep in somewhat balanced and equal - I adjusted the aircraft gross weights to allow for approximately two hours of range, then simply loaded weight to reach their maximum gross. Note - this does ignore real world maximum cargo weight limitations…some aircraft it doesn’t matter how much fuel you offload, they are still limited to a maximum pax/cargo load. As well, I know the Do228 will go FURTHER because it is FASTER on two hours of fuel, but we can adjust AH2 stage lengths in our preferences, so it isn’t so much about how FAR we go, but rather having enough fuel to go somewhere, shoot an approach, and find an alternate. In general, two hours is enough for our type of operations.

The Twin Otter comes in with the ability to carry 4,380 lbs. of cargo.

Our “Fly Off” competition will occur at the gorgeous ORBX Blue Canyon (KBLU) airport in the foothills of the Sierra Mountains in California. The high elevation (5,283) and short runway (3,300’) mirror the typical type of field we might find ourself flying into. We’ve contaminated the runway with some light snow, dialed in light winds, and the conditions will remain the same for both aircraft flights.

A flap 20 takeoff will be conducted, with a static runup and brake release, rotation near Vmca…

Liftoff at this maximum gross weight occurs at 1,088’…

A nice feature of the Twin Otter is that at full flap settings, it flies with a very nice nose down pitch attitude and can maintain a slow 70 knot approach speed with a great sight picture and without increasing speed - great STOL characteristics.

Nearly all turboprop modeling in FSX or P3D are terrible. The throttle response is just always lacking in these turboprops, and the Twin Otter is no exception. You can’t risk getting too slow because the engines don’t spool up the way they do in real life…so you have to fly with a little smidge of power in and on the better side by 5 or 10 knots of what you’d like to be doing.

Touchdown is near the bottom of the white arc on the airspeed indicator, on the threshold marking, followed by maximum braking, maximum reverse…the same technique is used for both aircraft.

Total landing run at maximum gross weight - a stunning 607’ - that will get us into pretty much any forestry strip or dirt hole cut out of the Idaho or Oregon back country…! 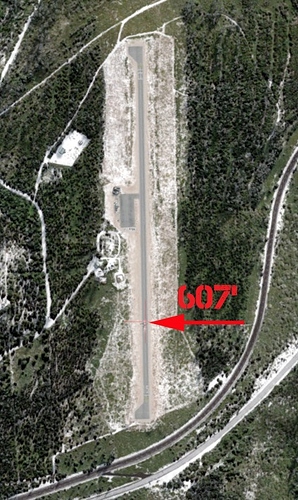 Now we move on to the $1,820,000 Do228. An absolutely stunning 3D model and cockpit…way more updated than the Twin Otter, and far more functional and convenient avionics. 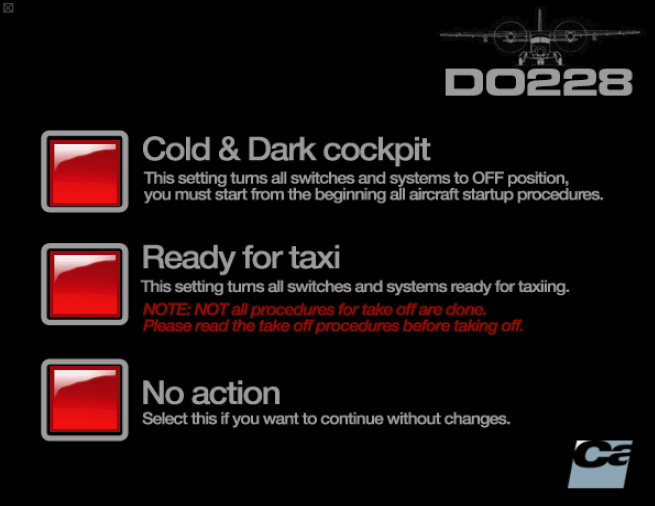 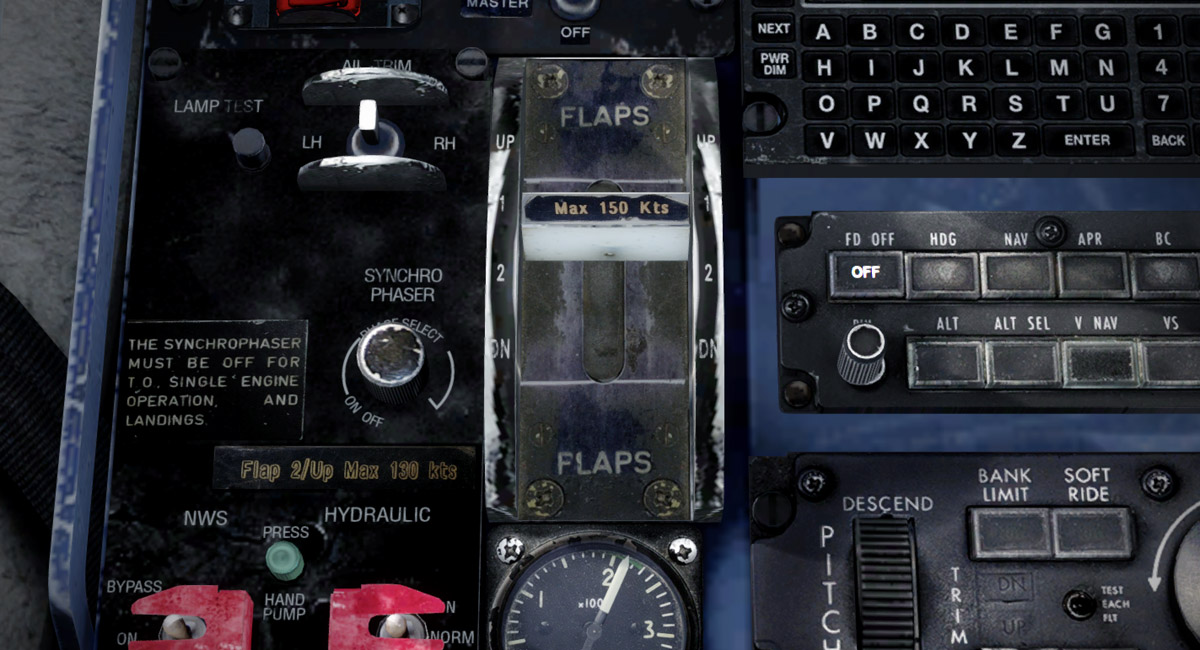 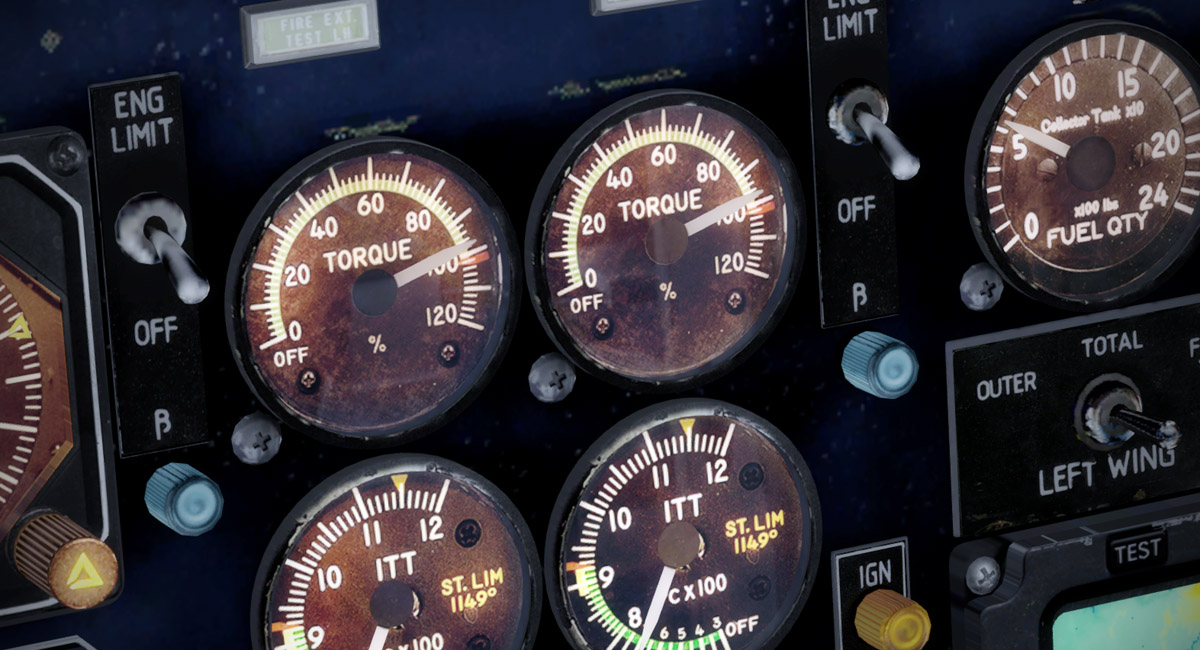 At max gross weight, the Do228 has a much longer ground run and required takeoff speed than the Twin Otter - taking 1,528’ vs the 1,088’ that the Twin Otter took.

Of course, once you raise the gear and get cleaned up, the Do228 will be much faster in climb, cruise, and descent with far less drag. And there is no comparing the avionics, the Do228 has a nice TAWS that would be very useful in MAC operations - and a more functional GPS, and pop-up autopilot controls…all very nice features. 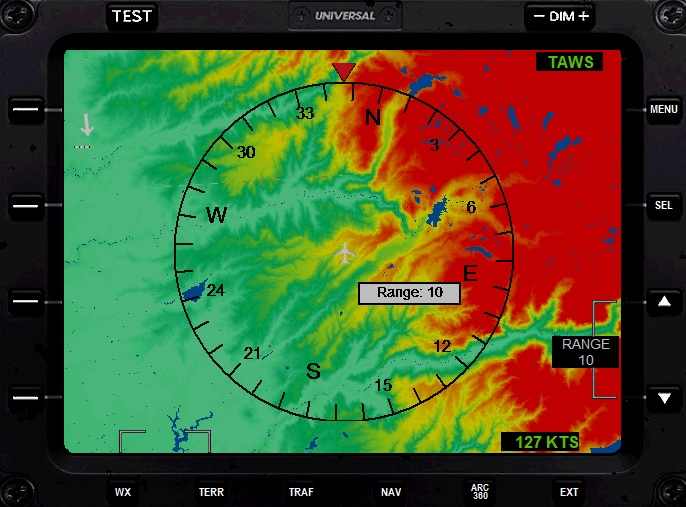 Completing the teardrop and lining up on final…

At full flaps, the Do228 also has a nice pitch attitude for landing that allows for a great sight picture. Carried airspeed is a bit higher, but the airplane is very comfortable to fly. 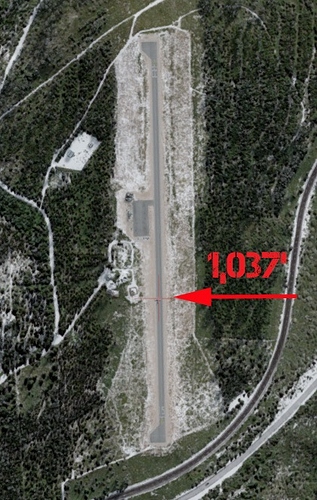 The final results are pretty favorable for the Twin Otter. The performance in takeoff and landing are probably the most important factors over cruise speed and/or avionics. I mean, I can probably retrofit the Twin Otter with an updated offering like the Reality XP GTN. And the Twin Otter IS the quintessential Bush aircraft.

So with that poll bias established (LOL)…what say you Mudspikers?

I think you should go for the Twin Otter because of the shorter takeoff and landing.

…but I admit that the better avionics, greater speed and 1000lbs more cargo together with the cheaper price sound really in favor of the 228…

Are there any fields in your area where that difference in takeoff and landing distance would play a role? If not: take the 228.

My heart says Twin Otter, but the difference in speed is impossible to ignore. Dornier by a nose.

The Almighty Dash 8 would be the only logical choice, but considering who owns the airline, the logical choice doesn’t always seem logic…

…that can fail. And fixed gear has never been forgotten.

…that can fail. And fixed gear has never been forgotten.

To be honest - I don’t know exactly how robust the Do228 landing gear is. I don’t even know if it is soft field / unimproved strip capable. To Google I go…!

A Canadian voted against the DHC6…?

Not to continue to bias the poll either…but I don’t know if @TheAlmightySnark will actually work on a TPE33…I’m not sure how he feels about them. I SAID…I DON’T KNOW HOW HE FEELS ABOUT THEM…!!

I believe that is former MAC employee Scarlett - she feels she has something to prove now. Hmm…might have to rehire her to fly the 185F…

I really like the shape of the Dornier’s wings.

So the choice is between:

I’d say the Dornier is clearly the winner.
Are there any strips in your region where the difference in runway needs even makes a difference?

Ok, I’m gonna stop this right here, right now, with a couple of pics of a cup that was made to comemorate Twotter no. 700. It was delivered to Widerøe.

If this doesn’t sway things in favour of the Twotter, nothing will…

Got it on ebay

There are apparently many people on this forum who have a strong passion for DeHavilland.
I don’t recall ever seeing a Twin Otter, but I’ve often seen the Kustwacht Dornier 228 flying past over the North Sea.

And I have the Dornier in X-Plane and was hoping I could pick up some tips from the AARs if MAC started operating it.

When I began skydiving in the early 90s, it was hard to find a large DZ in the US without a Twin Otter. I probably have a few hundred jumps out of them. They gave the impression as being typical DH, as in built like tanks which could haul 20 to 30 loads a day, 7 days a week and not complain.

Less popular, but definitely in attendance, were the Casa, King Air, C182, Beach 18, Caravan, and DC-3. At Clewiston, on the south end of Lake Okachobee was an operator with 2 x C195s and a Queen Air. Mike Mullins operated a Super King Air out of West Tennessee, which was taking a load to 14500 and back on the tarmac in 9 minutes. That’s round trip, takeoff roll to next boarding.

When I got to Europe, there were a lot of other aircraft being used, like the Pilatus Porter, Turbolet, Shorts Skyvan, and a Partinavia. Did not see a Twin Otter. But they seem to be everywhere else in the world, like North and South America, Africa, and Antarctica. Were it not for the rise of the less costly to operate single engine turboprops, the Twin Otter would probably still in production and hauling freight for FedEx and UPS. That’s why it’s somewhat interesting that Cessna is building the SkyCourier 408 for FedEx Express, which will haul twice the freight of the Caravan.

Edit: I stand corrected. They are still in production

Are there any strips in your region where the difference in runway needs even makes a difference?

Yes…the Do228 will definitely not fit into some of the strips that I’d like to go. The Idaho back-country is dotted with these little 800’ to 1,200’ strips that I struggle even in the 185F to get into. The Do228, while a great performer, probably would not be able to make it into some of those…

Would I regret buying the Twin Otter Discobot?