After my happiness of being promoted faded and I realised that the job wasn’t ANYTHING like they promised. I stuck it out as I have a young family a mortgage. 2 kids and 2 dogs to feed.

Today i started my 9th straight day at work (supposed to be 4 on 4 off).

I got to work to have 3 drivers shouting at me about their workload being to high (I know the feeling boys) another depot sent a trailer to Ireland that I literally couldn’t complete one of my collections without it. I sent out an email explaining the predicament and asked for help hiring a trailer temporarily to cover my work and the director of transport called me up screaming and shouting at me so loud that my admin assistant clasped her hands over her mouth and started shaking her head in disgust.

Once I told him my point of view and how wrong he was and how I was doing all I could to resolve the situation he called me a “f***ING idiot” and hung up on me.

Now I’m fairly thick skinned. I’m excellent at my job and saved the company 14k in 2 months doing it. I’m hard working and a very loyal employee and a great problem solver. I picked the phone up called him back.

He unleashed a string of obscenities at me and I halted his diatribe with a selection of words explaining that all calls are recorded. I will be contacting HR regarding institutional bullying and working time directive violations. Illegal vehicles being used on the road. And a whole host of other things and that I was using this conversation with him to email EVERY single piece of information regarding this to HR and the local news paper.

I then laughed. Said “who’s the idiot now” and “I’ll text you the number for the job centre once I’ve googled it on my pc and you can stick your job up your arse”

So. Looks like my office days are over and I’ll be back on the road again next week where its nice and quiet.

I’m not cut out for office work.

Sounds like it isn’t office work that doesn’t agree with you, but rather arrogant, ignorant, buffoons further up the chain of command. If you have solid proof of the things you mention then you should follow through in reporting them. At least then things will maybe improve for those still working there.

Sorry it didn’t turn out as you had hoped :(.

Why do companies set themselves up for failure like that? Competent people who operate with calm and efficiency get overridden by loud knuckle-draggers who only manage to set the place on fire. Yet they somehow win in the corporate world. Airlines fortunately are rarely run this way…yet.

The Peter’s Principle is real I think. 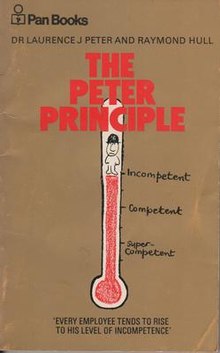 The Peter principle is a concept in management developed by Laurence J. Peter, which observes that people in a hierarchy tend to rise to their "level of incompetence". In other words, an employee is promoted based on their success in previous jobs until they reach a level at which they are no longer competent, as skills in one job do not necessarily translate to another. The concept was elucidated in the 1969 book The Peter Principle by Peter and Raymond Hull. The Peter Principle was published...

The problem is that while I was relatively well compensated for my job they have a ARMY of hard working untrained minimum wage warehouse staff. 40 odd drivers who in the least condescending way I can put it are not going any further and are stuck there.
management have a disciplinary procedure culture and blame and punishment MUST be established for everything. Including scapegoating management cock ups to lower level employees.
its disgraceful. I’m obviously emotionally upset regarding it but it’s the poor people who don’t have the means to say f*** you I’m better than this and leave.

This. A 1000X times this. It’s horrid. It’s also part and parcel of human culture since we stopped hunting antilope and gathering mushrooms to farm grain.
To the ones with power, the ones without are (even if they will not say so) cattle. A commodity to be traded and exploited. C’est la vie.

Dang @Victork2 , sorry to hear about this! It never ceases to amaze me how people can be absolute jerks for no reason whatsoever.

It is what it is. I got the job. I did it well. Other people ruined it. Its a shame but honestly it’s not an issue. It was the horrendous attitudes I was most incensed by.

The beauty of being a lorry driver is it never takes long to find a lorry to drive. I’m very lucky in that respect. I hate the job. But there is always a job. I’m thankful for the options It gives me. Its the other poor hard working people at my old place I really feel for. They deserve better. That is the real tragedy of all this

I know exactly how you feel.
Hope all will resolve for the best.

I’m sorry that this happened to you - I have to say, that’s not necessarily office culture in general but a case of bad management. I work an office job and I have my gripes about my work but that’s miles away from what you’ve just experienced. That’s way out of line and just awful.

The one thing I say about spending energy on a crusade (no matter how justified) is, be careful - I know your motivation is to help the others but remember that your family and your future job etc. are the most important things.

It is hard to ‘win’ these kind of battles but it’s very possible to lose and/or have your industry reputation impacted (and you may not know whether that’s happened until later)…and also it has you concentrating on something with negative energy, regardless of if you achieve what you set out to do. Company cultures / management issues are really difficult beasts and generally walking away (as cowardly as it may sound) is the best thing for you in the long run, as it isn’t your job to fix it.

There’s only so much of you to go around, so don’t get stuck fighting windmills, as ultimately you’ll just need to move on to the next thing and be happy rather than angry at home with your family and so on.

Sorry to rant but this is one of those things I’ve learned the hard way myself.

Best of luck for the next thing - you’ll get through this!

Sorry to hear you had a run-in with the oddities of management. I’ve always just wanted to be a grunt (line pilot)…I have zero desire to get involved in the office politics and responsibilities of middle and upper management. Which does make me appreciate when I do run across a good manager. It is their loss and I’m sure you don’t have to actively participate in making them miserable…sounds like they are already well entrenched in that mode. Glad you found a landing spot though…it is great that you have options. Take care of that family and yourself…don’t wrestle with the pigs, you’ll only get dirty.

The interesting thing about all this is that the original issues were never solved. What did your boss’s tantrum do to fix things? Absolutely nothing. With management like that, that company is heading for disaster and you want to be nowhere near it when that happens.

Good on you for taking a stand and “getting out of Dodge” as we say on this side of the pond. I’m sure you will land on your feet.

Thanks for the kind words everyone. It’s really genuinely appreciated and after sleeping on it I doubt I’m going to be able to change anything. Its a nice thought going on a righteous crusade for the good of all mankind but I think my energy is better focused on getting a decent job that pays my bills and putting myself through my CPL and changing my life altogether.

Again thanks for letting me vent yesterday guys it’s nice to have people to turn to. Your a great level headed bunch and I really appreciate your help

You’ll do great. Go drive that big rig some more. Get you some road zen. Park it at the runway to see the big birds come in.

I can’t stand the sort of sh*t you just went through. It’s one of the reasons I’m a homemaker. I just can’t deal with that.

Once I was doing an unpaid internship with the IT department of a small non-profit org. They were a nice bunch, doing nice things. My boss wasn’t. He exploited me, had me do all the work and earning zip. I was too dumb back then to see that just being able to put the work done on a resume was also worth something.

Anyway, I felt like an eFfin’ slave by the last few months of that period. I had to complete it, or would be saddled with a huge debt. So I coded a timebomb in the labelling macro he had me build (ugh, visual basic, yech!). Half a year after I left, the thing erased parts of itself, leaving it inoperable. Childish I know, but Boy did that feel good

On the other hand, that org was doing nice things, and I intentionally sabotaged them. So in the end I’m the bad guy in this story.

Half a year after I left, the thing erased parts of itself, leaving it inoperable

Oh god that is GLORIOUS.

Like I say I’m not built for politics. I’m built to drive and fly aeroplanes. One makes me miserable but I’m awesome at it. One makes me feel like I’m alive. The former gives me time to train to for the latter. It won’t be forever.

Regarding jerk-wads at work, I’ve found through my career that karma is a real thing. They may get away with it for awhile, but eventually it comes around.

This belief has allowed me to keep my cool through insane situations. End result has always been in my favor / against the belligerent, but unfortunately without the satisfaction of instant justice.

Boy did that feel good

I can only imagine. Still, i’d advise against it in the future. If that ever comes to attention of your employer, you are royally boned. From a legal standpoint that is.